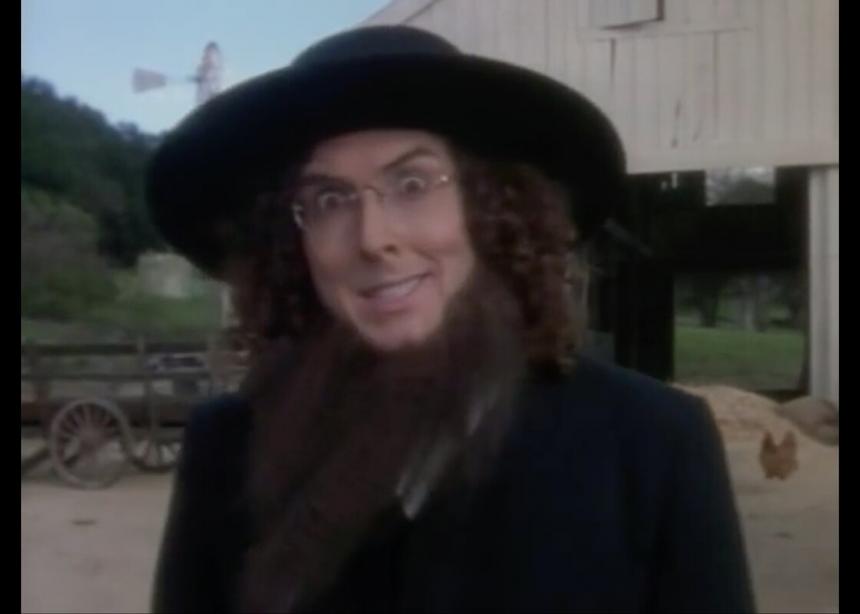 Bad Hair Day, Yankovic’s ninth album, was released on this day in 1996. It has sold more than 2 million copies in the United States alone.

The lead single, “Amish Paradise”—and the video that accompanied it—parodies the hit rap song “Gangsta’s Paradise” by Coolio as well as the Amish way of life.

Toward the end of the song, Yankovic sings, “We’re all crazy Mennonites living in an Amish paradise.”

In addition to images of buggies, farming and a barn-raising, the video features PG-rated scenes that skewer stereotypes of the Amish being meek and chaste people.

I was a big fan of Yancovic’s music when I was growing up, and I clearly recall when this video was released on MuchMusic in the weeks leading up to my 12th birthday. Hearing one of my favourite artists mention Mennonites was almost too much for my brain to handle. Never before had I heard my denomination referenced in popular culture.

In a May 1996 interview, Yankovic said that the Plain people seemed to be the perfect antithesis of Coolio’s drug-filled, crime-ridden world.

“When I had to think of the opposite of gangsters, I thought of the Amish,” he said. “They are diametrically opposed, I can’t imagine anything further apart.”

Much of his research for the song consisted of watching Witness, the 1985 Harrison Ford thriller in which a detective is assigned to protect a young Amish boy who witnesses a murder.

“Obviously it’s not accurate, that’s where the humour comes from,” Yankovic said of his song. “Ninety per cent of my perception was shaped by Witness.”

The mention of Mennonites in the final chorus earned “Amish Paradise” a spot in Steven P. Carpenter’s 2015 book, Mennonites and Media: Mentioned in It, Maligned by It, and Makers of It.

“Although the song mentions Mennonites, it says nothing about them except to imply they are closely affiliated with the Amish who are peace loving,” Carpenter wrote. “It is, nonetheless, noteworthy in that it mentions Mennonites.”

I’m no longer quite as enamoured with Yankovic’s music as I was 25 years ago, but I still hold a deep appreciation for it. Seeing him perform live at Winnipeg’s Burton Cummings Theatre in August 2016 was something like a dream come true.

When Yankovic ended his main set with “Amish Paradise” and sang, “We’re all crazy Mennonites,” once again it was almost too much for my brain to handle.

More videos:
Watch: Behind the music with Phil Campbell-Enns
Watch: MDS looks back at 2020
Watch: A tour of Voices Together