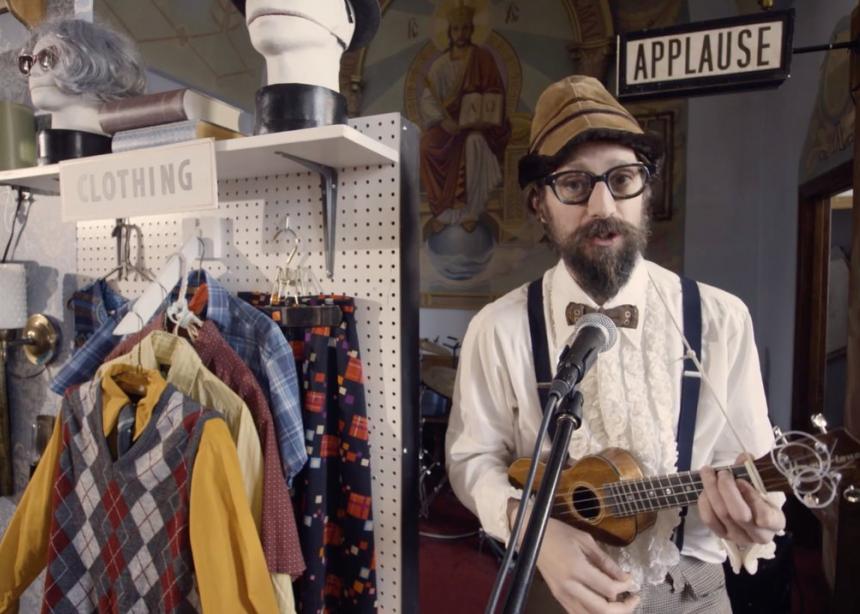 How do you make a thrift shop come to life?

Released on TV in Manitoba in 2017 and uploaded to Vimeo this past May, the documentary follows Wiebe as he constructs a corner of a thrift shop that comes alive and acts as a backing band during a concert by his alter ego, Francis Leonard.

Along the way, viewers get insight into Wiebe’s talents as a visual artist, musician, animator, puppeteer, costume designer, set-builder and filmmaker, as well as his philosophy of art-making.

“My work doesn’t rely on being polished—that’s not the style that I work with,” says Wiebe, who attends Hope Mennonite Church. “And so, it doesn’t have to be perfect. In fact, maybe it would be great if it wasn’t perfect, because then you can see some character there. There’s a lot of imperfection in the world, and you know, maybe I’m okay with that.”

“I think sometimes those people [who give up] are perfectionists, and so that’s why I’m striving to be an imperfectionist, where I am fully committed to seeing my vision become a reality, but I’m working within my means,” he adds. “Sometimes I’m even putting flaws in there because that’s what makes something beautiful. That’s what gives something a story.”