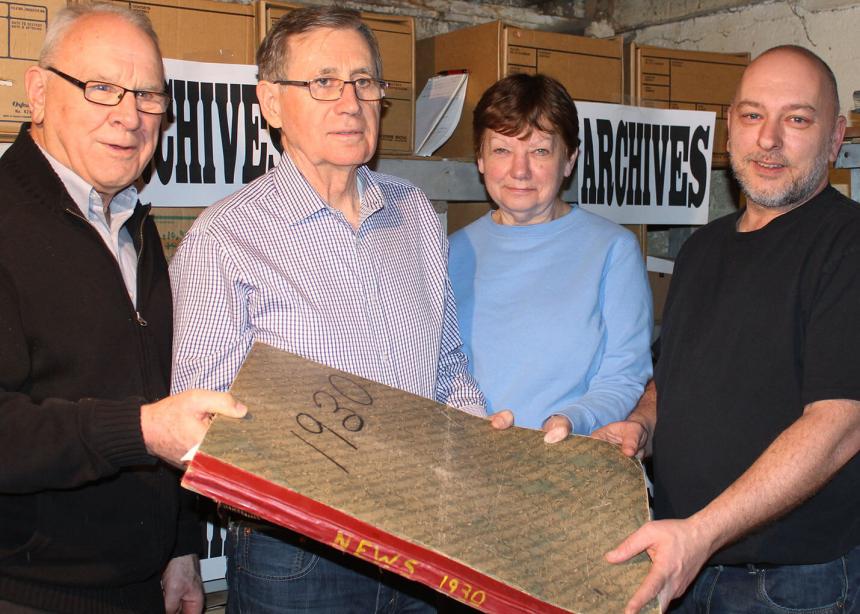 Holding the 1930 volume of the Saskatchewan Valley News, Mennonite Historical Society of Saskatchewan members, from left, Jake Buhler, John Reddekopp and Susan Braun, pose with Terry Jensen, the paper’s owner. Jensen is donating all of the paper’s archival material to the society’s Archives. (Photo by Donna Schulz)

Jake Buhler knows an historical treasure when he sees one. That’s why he’s so excited that the Saskatchewan Valley News is donating all of its back issues to the Mennonite Historical Society of Saskatchewan Archives in Saskatoon.

The Valley News, as it has been simply known, quit publishing after 114 years. The final edition rolled off the presses on Jan. 26, 2017. Owner Terry Jensen, who purchased the weekly community newspaper in 2014, cited a lack of advertising revenue as the major reason for the paper’s demise.

The newspaper had a long association with Mennonites. Not only did it publish news about Mennonites living in Rosthern and many neighbouring communities, it also boasted numerous Mennonite owners and publishers over the years.

According to a Rosthern history book, Old and New Furrows, the paper was launched in 1902 as the Enterprise. The name changed 20 years later.

D. H. Epp, who was a teacher by training, immigrated to Canada from Chortitza, South Russia, in 1923. Three months after his arrival, “his fellow immigrants approached him to start a German language newspaper which would serve as a link among the many immigrants who arrived in the 20s.” Jeremiah Frawley, who owned the Valley News at the time, agreed to publish Epp’s paper. The new paper was called Der Mennonitische Immigranten Bote (The Mennonite Immigration Messenger) and its first edition was published in January 1924.

In 1931, Epp purchased the printing plant and took over as editor of the Valley News. Fourteen years later, Der Mennonitische Immigranten Bote amalgamated with a German language paper from the United States and the name was shortened to Der Bote (The Messenger). Epp continued as editor and publisher of both papers until his death in 1955.

His foster son, John Heese, assumed responsibility for the Valley News at that point, while Walter Quiring became editor of Der Bote. When Heese died in 1960, his wife Lena and sons took over. Around 1964, publication of Der Bote relocated to Saskatoon. And in 1968, Lena Heese sold the business to three of her employees: Abe Penner, Ewald Epp and Frank Letkeman.

Ewald Epp continued as sole owner, with his wife Louise, from 1990 to 1997. He says that during his 40 years with the paper he worked as a typesetter, advertising salesman and, eventually, as editor and publisher. He is disappointed that the paper shut down. He’s also disappointed that the archival material will not be staying in Rosthern, but he appreciates that it will be preserved and made available to the public.

The donation includes both bound and unbound back issues dating from 1930. Earlier records were destroyed by fire in 1929. Also included are thousands of 35mm negatives, each one dated and identified with a brief description. Jensen estimates the collection may include as many as 10,000 negatives.

Buhler guesses that the number may be even higher, and that up to half of them could have Mennonite content. He also hopes the archives will acquire the paper’s digital files from the past 15 years. “Our first objective is to protect and store [the material],” says Buhler, noting that the archives, housed at Bethany Manor, will provide a temperature-controlled environment for preserving the historic newspaper.

Once the archives takes ownership, its next job will be to catalogue it all. “I expect that in six months we will have them on the shelves, though we won’t have them identified,” he says, adding, “Once we have lined up all bound copies, then people can come and have a look.”

Buhler says acquiring the Valley News is extremely valuable to the study of Mennonite history in Saskatchewan, adding, “We have yet to know how important it is.”

“At first we thought we were only benefitting the Mennonite community,” says Buhler. “Now we realize that there are many photos of the first nations community. We want to benefit their community as well.” 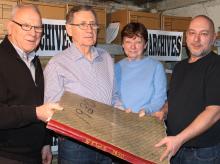 Holding the 1930 volume of the Saskatchewan Valley News, Mennonite Historical Society of Saskatchewan members, from left, Jake Buhler, John Reddekopp and Susan Braun, pose with Terry Jensen, the paper’s owner. Jensen is donating all of the paper’s archival material to the society’s Archives. (Photo by Donna Schulz) 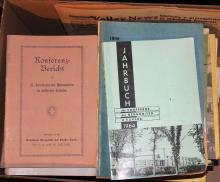 In addition to back issues and photographic negatives, an assortment of documents pertaining to Mennonite church history that have been housed at the Saskatchewan Valley News offices will also be donated to the Mennonite Historical Society of Saskatchewan Archives. (Photo by Donna Schulz) 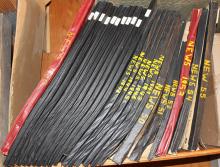 Bound copies of the Saskatchewan Valley News dating from 1930, as well as unbound copies from recent years, will find a new home at the Mennonite Historical Society of Saskatchewan Archives. (Photo by Donna Schulz)

The first volume of Der Mennonitische Immigranten Bote (The Mennonite Immigration Messenger), published in 1924 in Rosthern, Sask., is among the historical artifacts that Terry Jensen, the owner of the Saskatchewan Valley News, is donating to the Mennonite Historical Society of Saskatchewan Archives. (Photo by Donna Schulz)

I am very sad to see the demise of the Saskatchewan Valley News after so many years of serving the community of Rosthern and the entire region between Saskatoon and Prince Albert. But I am glad to see this effort has been undertaken to preserve the very valuable archive. I worked as a reporter at the Valley News ("The Valley Man is here," many people would say when I showed up at events with my notepad and camera) in the summer of 1991, when Ewold Epp was publisher. I remember seeing the old issues stored in the basement and had the chance to look through some very interesting old editions. I would love a chance to browse through the old issues again someday!

can you tell me how to access the valley news archives