‘Our children need to know’ 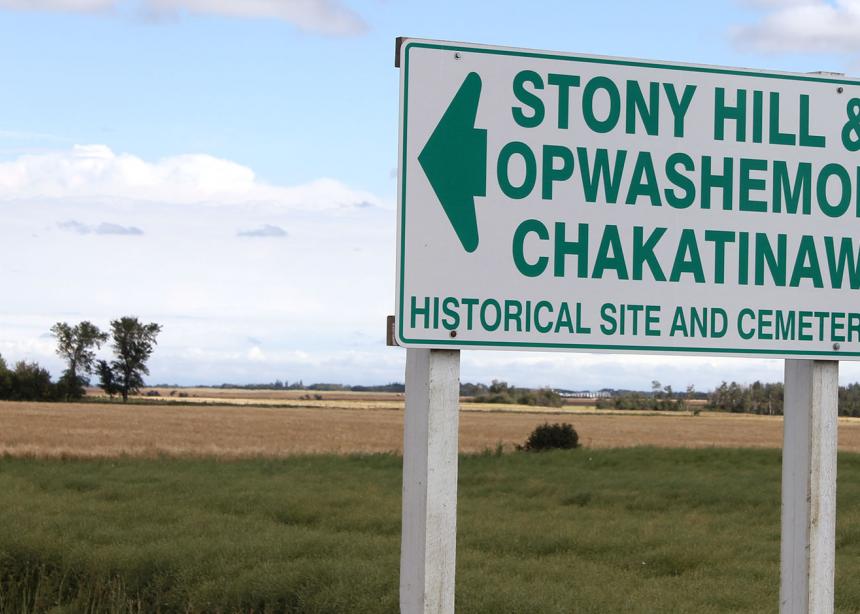 “It’s really cool to see white people here today,” said Cheyenne Fineday. The first nation teenager was speaking at the 140th anniversary of the signing of Treaty 6 on Aug. 23, 2016. Held at Stoney Knoll, 76 kilometres north of Saskatoon, the celebration included both indigenous and settler peoples.

The 1876 treaty granted the Young Chippewayan band land known as Reserve 107. But not many years later, hunger and political circumstances surrounding the Riel Resistance drove the people from their land, and the federal government sold it to Mennonite and Lutheran settlers without the consent of the Young Chippewayan people. Band members, now landless, were forced to make homes for themselves in other first nation communities.

“Until 1976, our people lived on this land unaware that it had been stolen from the Young Chippewayan band,” said Leonard Doell, coordinator of Mennonite Central Committee Saskatchewan’s Indigenous Neighbours Program. That year, some Young Chippewayan descendants travelled to Stoney Knoll to see the land that once belonged to them. Their goal, said Doell, was to talk with local farmers about their band’s connection to the land. “This created a lot of fear and anxiety in the settler community, and the Young Chippewayan who came hoping to build some understanding and empathy for their situation left frustrated by the experience,” said Doell.

In spite of their initial failure, said Doell, the “courageous but awkward” efforts of these Young Chippewayan members served as a catalyst for both Mennonites and Lutherans to learn about the injustice the band had suffered.

About the video: Participants at the 140th anniversary of the signing of Treaty 6 receive commemorative medals. Families with young children were invited forward first. Harry Lafond, Office of the Treaty Commissioner, urged parents to use the medals to teach their children the meaning of the treaty.

Thirty years later, in 2006, Chief Ben Weenie approached Doell about holding a gathering at Stoney Knoll, at which Young Chippewayan, Mennonite and Lutheran people could come together to observe the treaty’s 130th anniversary and begin to build relationships. Weenie made it clear that his people had no interest in displacing anyone from the land, but that they were seeking friendship and understanding. The community held meetings to discuss Weenie’s proposal, and on Aug. 22, 2006, the historic gathering took place. There, representatives of each of the three groups signed a memorandum of understanding, pledging to work together to redress past injustices.

This year, on Aug, 23, the Young Chippewayan people again welcomed Mennonites, Lutherans and others to Stoney Knoll, to celebrate the treaty and continue the friendship. Participants heard elders, dignitaries and guests address the theme of reconciliation.

Many spoke of the legacy of the late Ben Weenie.

Chief Sylvia Weenie described her late husband as a visionary. “One of his visions was to get along with one another,” she said, adding, “Our children need to know” about his efforts to bring about reconciliation.

Bobby Cameron, chief of the Federation of Sovereign Indigenous Nations, remembered Weenie as “a kind man, a role model and an inspiration.”

Gary LaPlante, a Young Chippewayan descendant and member of Moosomin First Nation, recalled Weenie’s acknowledgment that the Mennonite and Lutheran farmers “really love the land.” Weenie recognized that the settler peoples felt the same kind of attachment for the land that his own people felt, he said.

Jason Johnson, pastor of St. John’s Lutheran Church in Laird, said: “Ten years ago we began a journey together,” learning that “we truly are all part of the experience of treaty. . . . My wish for you is that you meet a new friend today.”

A.J. Felix of Sturgeon Lake First Nation noted that treaties are agreements between equals. “Treaty created a ‘Treaty Indian,’ ” he said, adding, “It also created a ‘Treaty White Man.’ Both are responsible for keeping the treaty.”

“We haven’t fared well with the provincial or federal government,” he said. “We need your help so we’ll have a voice in Regina and Ottawa, and declare our poverty to the lawmakers throughout the land.”

Each participant received a commemorative medal. Harry Lafond, executive director of the Office of the Treaty Commissioner, said the original signatories each received a medal, which was to be a visible reminder of the treaty. In the same way, he said the medals handed out on Aug. 23 should remind participants that they, too, are treaty people. He urged them to use the medal to teach their children and grandchildren the meaning of treaty, saying, “Take, cherish and teach.”

Although the Young Chippewayan land claim remains unsettled, Doell believes there has been progress in relationships between the band and local community. “There’s been huge movement over the past 10 years,” he said. “Even more so from 40 years ago.” But, he admitted, “there are still a lot of challenges ahead. Not everybody in the community is in the same place.” 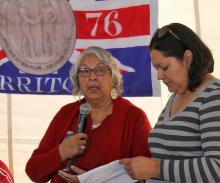 With her daughter Kimberley holding her notes, Chief Sylvia Weenie addresses the audience gathered to mark the 140th anniversary of the signing of Treaty 6. ‘Stoney Knoll history needs to be told,’ she says. ‘Our children need to know.’ (Photo by Donna Schulz)

Rita Macdonald of Rosthern Mennonite Church, left, visits with Marshall Williams and his wife Verna at the 140th anniversary of the signing of Treaty 6, held recently at Stoney Knoll, Sask. Williams is the hereditary chief of the Young Chippewayan band. (Photo by Donna Schulz)

Under darkening skies, participants line up to receive commemorative medals marking the 140th anniversary of the signing of Treaty 6. The medals are to be a visible reminder of the treaty, says Harry Lafond, executive director of the Office of the Treaty Commissioner. (Photo by Donna Schulz) 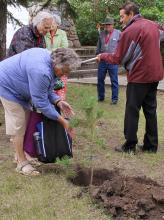 Edna Zacharias of Osler Mennonite Church tosses a handful of soil onto the roots of a pine tree planted to commemorate the gathering of friendship that took place at Stoney Knoll, Sask., marking the 140th anniversary of the signing of Treaty 6. (Photo by Donna Schulz)