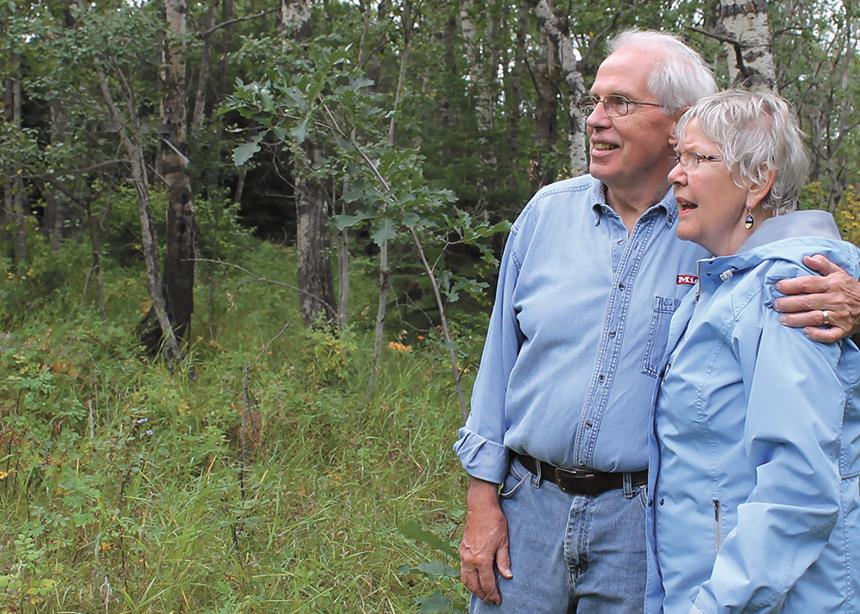 Wayne and Carry Dueck appreciate the wild beauty of the place they have come to call The Land. (Photo by Donna Schulz)

As they walk the length of their 32-hectare (80-acre) property, it is evident that Wayne and Carry Dueck share a deep love for the place they simply call The Land.

In 1981, Wayne was serving on the board of directors of Native Ministries in what was then the Conference of Mennonites in Canada. While attending a board meeting in Rosthern, Sask., he glanced through a copy of the local weekly newspaper and spotted an advertisement that read: “Land for Sale, 80 acres.” The ad included a Duck Lake telephone number.

“I called purely on impulse, remembering that I’d often commented to Carry that, as a first-generation urbanite, it would be a dream-come-true to own a piece of land other than the small residential lot [we] owned in . . . Saskatoon,” says Wayne.

He met the owner at the property that evening. “We sat on the end gate of his truck,” he recalls. “Sandhill cranes circled overhead. A Swainson’s hawk screamed off in the distance. Coyotes antiphonally sang to the east and to the west. It seemed so peaceful and quiet.”

It didn’t take Wayne long to decide to buy the property. Then he found a pay phone in Duck Lake and called his wife. “I asked Carry how she felt about my buying 80 acres of non-productive farmland,” he says. She was enthusiastic.

The property, located about 11 kilometres west and four kilometres north of Duck Lake, was home to mature spruce and trembling aspen trees. Diamond willow brush surrounded a 1.5-hectare slough at the north end of the property. Chokecherry, saskatoon berry and wolf willow bushes grew along the eastern border.

The Duecks wanted the property to remain in its natural state. But they also wanted to add trees.

“I decided that soil conditions were perfect, with a bit of help from Mother Nature, to grow coniferous trees,” says Wayne.

In 1986, he planted 10,000 white spruce and Scots pine trees. He planted another 10,000 seedlings the next year. In the years that followed, Wayne and his sons Colin and Greg, along with many friends, planted even more trees, bringing the grand total to 38,001 coniferous trees by 2014.

“I saw Wayne as a man who was passionate about planting trees,” says Carry. “The joy of seeing them planted and then grow was a gift to all who came to visit.”

Alluding to the allegorical tale, The Man Who Planted Trees, by Jean Giorno, Carry says, “The man [in the story] became a major inspiration for the idea of planting trees as a route to reparation, a way of making amends for the damage we have dealt to the natural world.”

Today Wayne estimates that some 10,000 second-growth conifers, some of them 2.5 metres tall, have sprouted from the ones he planted.

Animal life, too, is abundant on The Land. The Duecks have spotted deer, elk, brown bears, porcupines, squirrels and many species of birds over the years.

The Land was a special place for the Duecks when their sons were growing up. They spent summers camping on the property and hosted their sons’ birthday parties there.

“Over the years, several hundred individuals and many groups have spent time with Carry and me at The Land,” says Wayne. “For many, being so close to nature was a new experience.”

One group that spent time on The Land was Saskatoon’s Nutana Park Mennonite Church, Wayne and Carry’s faith community. On more than one occasion, the congregation enjoyed church picnics and Sunday afternoon faspa at the Duecks’ property.

The Land provided Wayne and Carry with many teaching opportunities. They delighted in seeing children peer into bluebird nesting boxes, climb trees, and listen, often for the first time, to coyotes singing.

He recalls family and friends playing baseball “using a bat carved from a poplar tree,” roasting wieners and sipping hot chocolate on cool fall evenings, and telling progressive stories around the campfire.

The Land allowed the Duecks “to create a place where many individuals and groups could experience each other and God’s nature in positive and engaging ways,” says Wayne. It has been “the near perfect environment to teach and demonstrate love, kindness, understanding, tolerance and forgiveness,” he adds.

These days, the Duecks live in Kelowna, B.C., near son Greg and his family. But they return to The Land whenever they can, marvelling at the growth of the trees, noting what has changed and what remains the same.

“The Land was considered agriculturally unproductive,” says Carry, “but, in fact, it was a huge gift of life.” 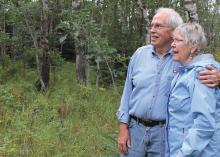 Wayne and Carry Dueck appreciate the wild beauty of the place they have come to call The Land. (Photo by Donna Schulz) 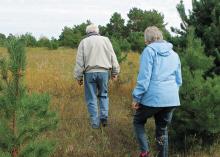 Wayne and Carry Dueck walk across the property they refer to as The Land. (Photo by Donna Schulz) 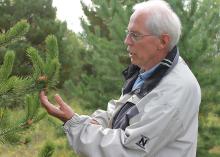 Wayne Dueck admires how the Scots pine trees he planted over 30 years ago have grown and proliferated over the years. (Photo by Donna Schulz) 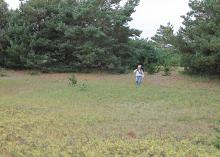 Wayne Dueck is dwarfed next to the Scots pine trees he planted on The Land over 30 years ago. (Photo by Donna Schulz) 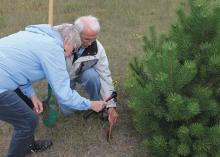 Wayne and Carry Dueck hammer a cedar shake into the ground in front of a pine tree. This marker recalls a special friendship. Other markers over the years have commemorated loved ones who have died, or recalled distant friends. (Photo by Donna Schulz) 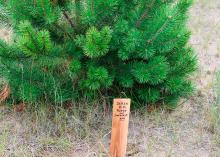 The names on this cedar shake will disappear with time, and the marker itself may disappear, as deer seem to find them tasty, says Wayne Dueck. (Photo by Donna Schulz) 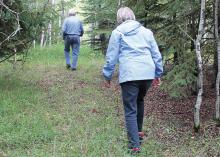 Wayne and Carry Dueck wander through the trees on the property they call The Land. (Photo by Donna Schulz) 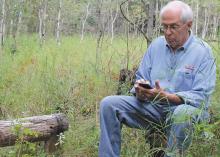 ‘Is there cell reception here?’ Wayne Dueck wonders as he sits in a former campfire circle on The Land. (Photo by Donna Schulz) 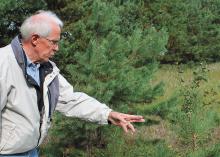 Wayne Dueck notes the proliferation and size of second-growth conifers that have sprung up in recent years on The Land. (Photo by Donna Schulz) 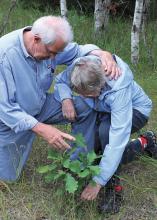 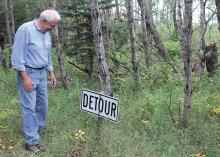 Wayne Dueck laughs when he sees an ironically placed detour sign. Spending time on The Land has been a detour of sorts for the Duecks as they have re-evaluated what is important to them. (Photo by Donna Schulz) 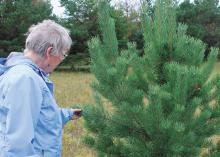 Carry Dueck marvels at the many second-growth trees that have sprouted over the years since her husband Wayne planted thousands of trees in the late 1980s. (Photo by Donna Schulz) 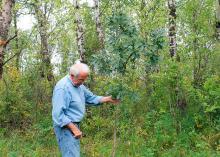 Wayne Dueck examines a burr oak tree he planted in the late 1990s. He expects that, if the tree survives, it may outlive many of the surrounding conifers. (Photo by Donna Schulz)

Thank you, Wayne and Carry, for recognizing and nurturing the Spirit of The Land. Your tender care makes it forever a place of rest and rejuvenation. It is holy ground!

Some years ago, I received an email from Wayne Dueck telling me about their tree farm. Wayne is the son of my late cousin, Lillian (Roth) Dueck.

I found his information quite fascinating, especially after he told me that they had placed a wooden stake beside the tree he planted for me with my name on it. Age and distance have prevented me from travelling to the farm to see it for myself.

What Wayne and Carry have undertaken is both interesting and very worthwhile. God bless them!

What a wonderful story. Planting trees is so good for the environment. I hope this place remains an inspirational legacy in perpetuity for the Duecks’ care for the God-created Land we share with our Indigenous neighbours