'We are willing to pay all our taxes. We just want some of them to go for peace, not war.' 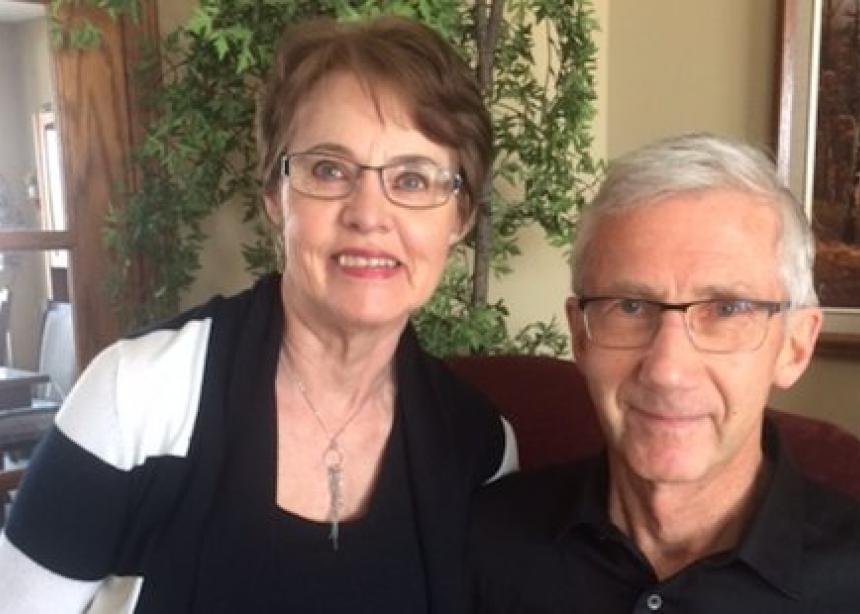 Instead of sending that money to the government, they will divert it to Conscience Canada’s Peace Tax Trust Fund.

“Christ taught us to be non-violent, to love our enemies, to pray for our persecutors, to break down barriers and animosities. That’s our starting point.”

Along with their Christian faith, they draw inspiration from their service as volunteers with Mennonite Central Committee (MCC) in Botswana from 1972-75, and from when Ernie worked with MCC from 1983-86 providing aid to people caught in conflict.

“I think of the horrors of war, the suffering of civilians,” said Charlotte. “My heart breaks for all the children in the world caught in war. It doesn’t make sense the world spends billions on arms. That money could be used for much better purposes.”

The example of family members who were conscientious objectors during the Second World War is also on their minds.

Charlotte’s father refused to fight during the war, doing alternative service in Alberta and B.C. Two of Ernie’s uncles were also conscientious objectors at that time.

Back then, the government “needed our bodies” to fight, said Ernie.

“Today, it just wants our money. How can we live out our convictions about peacebuilding in our time? How can we pray for peace, but pay for war? It’s contradictory. It doesn’t fit, doesn’t make sense.”

The couple attend the LaSalle Community Fellowship Church, a Mennonite Brethren congregation. They used to be members of Glenlea Mennonite Church, where Ernie was co-pastor from 1990-2008.

They have been diverting the military portion of their taxes for 10 years in the hope that one day the Canadian government will make it legal for people to pay taxes for peaceful purposes.

If that happens, the couple will happily give the money they have diverted into the Peace Tax Trust Fund back to the government.

“We will immediately hand the money over,” Ernie said.

The Canada Revenue Agency (CRA) isn’t willing to wait that long. Starting last year, it began deducting about $500 a month from Ernie’s government pension. About two-thirds of the amount has been recovered so far.

For Ernie and Charlotte, this is a change from the past; previously, the couple only received letters or phone calls from the CRA reminding them they owed money.

The government’s recent action won’t change their minds, though.

“We are not convinced to stop doing it,” Ernie said.

They are also quick to point out there is nothing secretive or furtive about what they do.

“Every year, when we file our taxes, we send a letter to the CRA, the Prime Minister, the opposition leader, our MP and the Minister of Finance, telling them what we did,” said Charlotte.

Over the years they have had many conversations with politicians and the CRA.

“They tell us they can’t give into everyone’s wishes, that the government can’t let Canadians dictate how it spends money,” Ernie said, adding he tells them he isn’t against support for veterans or for how the military helps people caught in disasters in Canada.

“But we tell them conscientious objection is a right in Canada, something that has been practiced in this country for over 200 years. It’s about freedom of conscience and religion, something enshrined in the Charter.”

For Doug Hewitt-White, president of the board of Conscience Canada, people like Ernie and Charlotte “are the core of what we are all about.”

They epitomize the spirit of conscientious objectors of the past, he said, noting about 150 Canadians divert their taxes to the Peace Tax Trust Fund each year.

“There is a long tradition of allowing people to follow their conscience in Canada in times of war,” he stated. “If people can refuse to serve in time of war, why can’t they be allowed not to pay for war?”

Ernie and Charlotte understand not everyone can do what they do. Most people have their taxes taken off at the source, and some wouldn’t want to do it for fear of getting into trouble with the CRA.

“But what if a thousand people decided to do it?” Ernie asked, noting people can also fill out a Peace Tax Return on the Conscience Canada website indicating they object to having some of their taxes go for military spending.

“It’s a really big challenge. We need more people to join us.”

To that end, the couple says they are happy to speak to any group that wants to learn more about their decision, and how they can become involved.

“We believe in this, and in what Conscience Canada is doing,” said Ernie. “It’s a way to honour the legacy of the young men who went before us, following their conscience.”

Adds Charlotte: “We are willing to pay all our taxes. We just want some of them to go for peace, not war.”

The idea for war tax resistance in Canada goes back to 1981, when Winnipeg Member of Parliament Stanley Knowles and five other MPs published a letter that said, in part: “In times of military conscription, exemption from service in the military can be claimed on grounds of conscience, and alternate service is approved. It should be equally possible to claim exemption from paying for war preparation, and an alternative provided.”

Conscience Canada was incorporated in 1983 to advocate for ways for Canadians to legally divert taxes to peaceful purposes. The first Private Member’s Motion calling for a National Peace Tax Fund was introduced into the House of Commons that same year; 12 other motions and bills have followed.

The most recent was Bill C-363, “an act respecting conscientious objection to the use of taxes for military purposes.” It was proposed in 2013 by Alex Atamanenko, an NDP MP from B.C. who served from 2006 to 2015.

Conscience Canada estimates $32 billion, or 9.7 percent, of Canada’s budget was spent on the military in 2018.

For those who want to divert that portion to their Peace Tax Trust Fund, or who simply want to indicate their “objection to paying taxes to support the military war machine,” it offers a Peace Tax Return on its website at consciencecanada.ca.