Ask Winnipeg filmmaker Paul Plett what it was like shooting his most recent project in Kenya, and he responds with two words: “Very intense.”

I have loved Mennonite Central Committee (MCC) thrift stores since I was a kid. An essential part of my childhood revolved around a big, old “tickle trunk” filled with frilly pink bridesmaids dresses, cut-off pirate pants, and scarves in all shapes, sizes and colours. These treasures were discovered in the racks at the Vancouver store.

It's been quite a while since I have posted here. This September is the least busy that I have been in a long time, and I intend to take some time to read, write, and reflect, as I work on my thesis project for the MTS degree at Conrad Grebel University College.

On their 20-day cycling trip from Bemidji, Minn., to Waterloo, Ont., earlier this year, Jami Reimer and Thomas Krause heard the chorus of bullfrogs, birds and rushing water. These melodies stood in stark contrast with the thunder of cars and trucks on the highways. 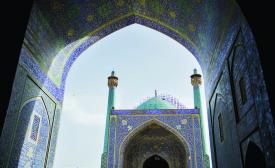 Construction of the Imam Mosque began in 1611. (Photos by Cecilly Hildebrand)

I’ve recently started the practice of praying with my one-year-old son before bed. We’ve had mealtime prayers going for a while now, usually in the form of a song, and at night I usually sing to him, too. Now that he’s starting to learn some words and showing evidence of understanding more and more of what we say to him, though, I thought it seemed like a good time to take up the spiritual practice of a spoken bedtime prayer with him; after all, it’s never too early to start a good habit!

I used to think I’d be flattered if evangelists targeted me. When someone tried to convert me to their belief system, I would surely see it as a selfless act borne out of genuine concern for my eternal destiny.

Last year I was asked if I was interested in serving on the planning committee for Mennonite Church Canada’s Native Assembly 2014.

It’s been over a month since the Mennonite Church Canada Assembly was held in my new/old hometown of Winnipeg, but I for one am still thinking about everything I heard there. I didn’t go as a delegate (being between churches makes that difficult!), but I wanted to make sure I didn’t miss out on the Being a Faithful Church (BFC) discussions. As some of my previous posts suggest, our Mennonite theologies of sexuality are of particular interest to me, so I wanted to share a few of my highlights of that aspect of the Assembly.

A Year of Reading Biblically (YORB) continues, and if you are following the reading schedule, you’re somewhere in Jeremiah by now. The year is more than half over, and I thought it would be fun to speak with some fellow YORB participants to hear about their experience so far. 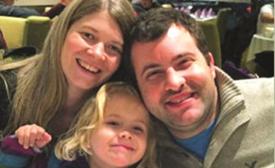 Today's guest blogger is Peter Brown, 23, is a recent graduate from CMU.  He recently took a trip to Iran (May 25 - June 15) for interfaith dialogues. He travelled to Qom, Isfahan, Shiraz, and Tehran. The following are some reflections that resulted from the interfaith dialogue.

Today's guest blogger is Tim Wenger, a masters student located in Winnipeg, MB. He writes about how  we need to remember that as Mennonites, our social justice work is rooted in us following Jesus. For more of Tim's writings you can visit his blog, http://tttpas.blogspot.ca/ .

My Saturday morning began with discord. I woke up, checked Facebook, and found my newsfeed full of statuses that made me feel sick. I couldn't stop reading, every line filling me with anger. Who were these people glibly posting such hurtful articles? How had I let myself become vulnerable to their opinions by allowing their voices into my life? I rounded these Facebook "friends" up and without a second thought, clicked delete.

In the song “Working Holiday” from his 2009 album Safe or Free, Matt Epp sings about Newfoundland, California and Alberta all feeling like home. The singer-songwriter grew up in Crystal City, a rural village in Manitoba, and started his music career in Winnipeg.

Young adults are often transient people. They move away from home, go to school, find jobs, travel, serve abroad. While that’s challenging enough, finding a new community to connect with can be even more difficult.

That’s why many believe intentional communities can be beneficial for them.

According to Merriam-Webster.com, the word “nerd” is defined as “a person who behaves awkwardly around other people and usually has unstylish clothes, hair, etc.” or “a person who is very interested in technical subjects, computers, etc.”

Less than a month ago a vigil was held in Winnipeg for the school aged girls kidnapped in Chibok, Nigeria.

Today I discovered, in much heartache, that our brothers and sisters in Christ continue to be persecuted. 56 people were said to have died in a recent escapade by a local terrorist group who are also responsible for the kidnappings.

As A Year of Reading Biblically continues, a handful of people have drawn my attention to a recent study on the Bible reading habits of Christians in Canada.

The American dream is just that for many—a dream. For Latin Americans facing violence in their home communities, the journey to make that dream a reality can be a nightmare.

Kyle Penner had one apple in his fridge and some leftover potatoes from his meagre meal the night before for lunch. After nearly a week of living on about five dollars worth of food a day, he says he started to look at his food differently.