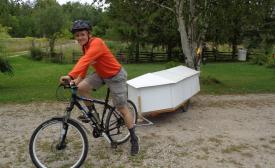 With the help of the internet, students, faculty and administrators from two Mennonite colleges in two different countries met on April 23 to launch something brand new in Mennonite higher education. The groups from Canadian Mennonite University in Winnipeg and Bethel College in North Newton, Kan., were celebrating the first issue, now live, of the Marpeck Undergraduate Research Journal (MURJ). The name is derived from a major source of financial support, the Marpeck Fund, set up by Robert S.

The time has come to move again. We were in Harrisonburg, Virginia longer than I thought we would be, and it's been good. But the end always comes and somehow we say goodbye.

Reflecting on international students and culture the other day, a colleague commented on how a group of students who had been struggling in classes refused to blame anyone for their failing grades, took responsibility, and made no excuses. He was surprised because U.S. students usually go on and on with excuses, blaming roommates, teachers, the school, society, but not accepting their own part in not meeting the expectations for the class.