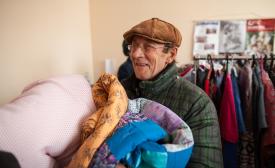 Aleksandr Dmitriyenko holds MCC comforters he received in Zhytomyr, Ukraine, in 2016 during distribution to people displaced by violence in the eastern part of the country. (MCC photo by Colin Vandenberg)

Mennonite Central Committee (MCC) will kick off its 100-year anniversary celebration in 2020 by bringing together volunteers in Canada, the United States and Europe to make 6,500 comforters in one day. 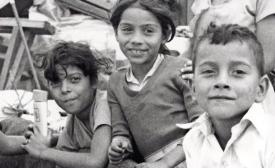 Mennonite Central Committee has helped people around the world since 1920. (Photo courtesy of YouTube)

Mennonite Central Committee is gearing up to celebrate its centennial next year, and the relief organization has started producing a number of articles and videos to mark the occasion.

You can watch one of those videos—a three-minute-long piece that covers MCC’s history from 1920 until the present day—below.