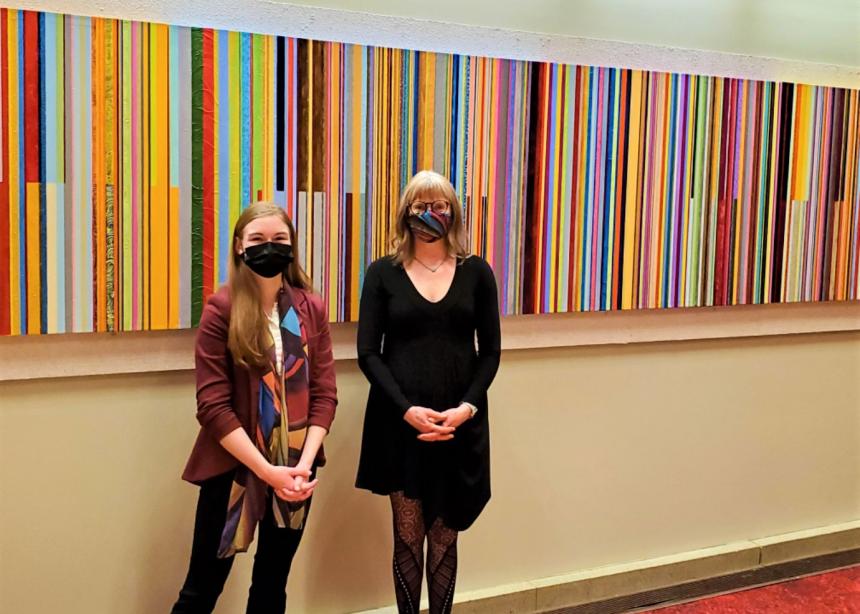 CMU student Anna Schwartz, left, stands with visual artist and piano instructor Shirley Elias in front of one of the artworks that make up ‘Spectrum – The Colour of Music; Precision and Impression.’ (CMU photo)

Imagine if you could see sound. When Anna Schwartz listens to music, she not only hears the different instruments, keys and dynamics—she sees them. That’s because she has synesthesia, a neurological condition in which information entering a person’s brain stimulates multiple senses at once.

Only four percent of people worldwide are synesthetes. For some, biting into a juicy apple might cause them to see a specific image, while others might experience a physical feeling of touch when they hear a certain word. Schwartz sees a kaleidoscope of colours when she listens to music.

Originally from Ontario, Schwartz is a pianist, composer, and fourth-year student at Canadian Mennonite University (CMU) in Winnipeg. She is working toward a Bachelor of Music with concentrations in piano performance and music education.

This spring, she shared her experience with synesthesia in a new way through a project with the Winnipeg Symphony Orchestra (WSO). She collaborated with Shirley Elias—visual artist, concert pianist and her piano instructor at CMU—to create a visual representation of Scheherazade, a symphonic suite composed by Nikolai Rimsky-Korsakov.

The result is a collection of paintings Elias created based on what Schwartz sees when she listens to Scheherazade. The series, titled, ‘Spectrum – The Colour of Music; Precision and Impression,’ was hung in Winnipeg’s Centennial Concert Hall and was projected on a screen while the orchestra performed Rimsky-Korsakov’s work at a concert on March 12.

The ‘precision’ portion of the project spans four canvasses, and consists wholly of vertical lines painted in the colours and textures Schwartz sees throughout Scheherazade, depicted exactly when and for how long she sees them. It features 537 stripes and 269 colours; spread over 45 minutes of music, this means Schwartz's colours change on average every three to five seconds.

For example, when a solo violin soars over the strumming of harps, she sees yellow, her colour for the key of e minor. The solo violin’s texture is wavy, while the harp underneath is cloudier, adding pops of colour here and there to the yellow.

Schwartz listened to the WSO’s entire season to figure out which piece would work best for the collaboration. She chose Rimsky-Korsakov’s composition because of its multitude of vibrant, distinct colours. “Every instrument had such a unique role in this piece of music, its own purpose and way of contributing to the overall picture,” she says. She discovered that Rimsky-Korsakov also had synesthesia, as did other composers like Franz Liszt and Olivier Messiaen.

The artistic process began with Schwartz reading through the whole musical score measure by measure, meticulously marking every colour and texture and when she saw it. Equipped with Benjamin Moore palettes—around 3,500 colours—she wrote down the six-digit codes of each colour, which Elias used to determine an exact colour match. The artist then mathematically calculated how wide each stripe on the canvas should be in relationship to the whole piece. “Some of those were milliseconds, sometimes there was two colours at one time,” Elias says.

For the ‘impression’ part of the project, Elias used Schwartz’s colour palette and descriptions to create her own artistic representations of Scheherazade’s four movements in four paintings. For the rhythmic second movement she painted in the style of cubism, while a gentler movement she likened more to watercolours. This gave Elias the chance to expand on details that had to be simplified and on occasion were too small to see in the ‘precision’ piece.

Schwartz’s synesthesia has also led to discoveries and unique learning methods in her piano lessons with Elias. They were once working on a difficult section of a Chopin piece with repeated octave chords in the left hand that were overpowering the downbeat in the right hand. When Elias asked Schwartz what colour the section was, she replied it was the blue section (the octaves) with a little red in the background (the downbeat). Elias suggested she switch her thinking, to consider it the red section with just a shimmer of blue in the background. “Once we changed the priorities of those, then it all switched” and Schwartz was able to tackle the section, Elias says. “Just to use the colours and the language rather than any physique or technique or even harmonies themselves, as an artist of course I found that fascinating.”

There are many kinds of synesthesia, and most people who have it experience multiple types. Schwartz also has grapheme—color synesthesia, which means her brain associates numbers with specific colours. It’s how she first discovered she had synesthesia, when at the age of six, she was distraught that the numbers on the wall of her classroom were the wrong colours.

Schwartz is also taking science courses alongside music and wants to pursue studies in medicine or music and health after she graduates. This symphonic exploration brought together her passions for music and science, something she says CMU excels at facilitating.

“One of the incredible things about the CMU music program is that there’s so many opportunities to do things that go beyond just the coursework, but are still a part of who you’re becoming as a student and as a musician as a whole,” she says, adding that CMU allows students to take courses in countless different fields and “professors encourage you so much to make connections across disciplines.”

She and Elias examined the brain and neurological side of synesthesia, but also how it affects piano music. They discussed education, asking questions like, “How can we create new ways of introducing people to classical music that are more accessible, through colour and visual aid?” Schwartz shared about the Scheherazade project in some of her classes, and in her music history course, she curated a full concert program of music that was inspired by colour and synesthesia.

“I really do feel like this project brought together so many different disciplines for me, all of which I find fascinating,” Schwartz says. “I’m just loving having a foot in the door of all these different worlds.”

Schwartz and Elias were featured in a short documentary, Spectrum: The Colour of Music, created by Les Productions Rivard. 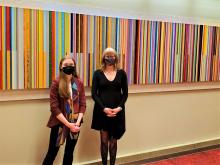 CMU student Anna Schwartz, left, stands with visual artist and piano instructor Shirley Elias in front of one of the artworks that make up ‘Spectrum – The Colour of Music; Precision and Impression.’ (CMU photo)