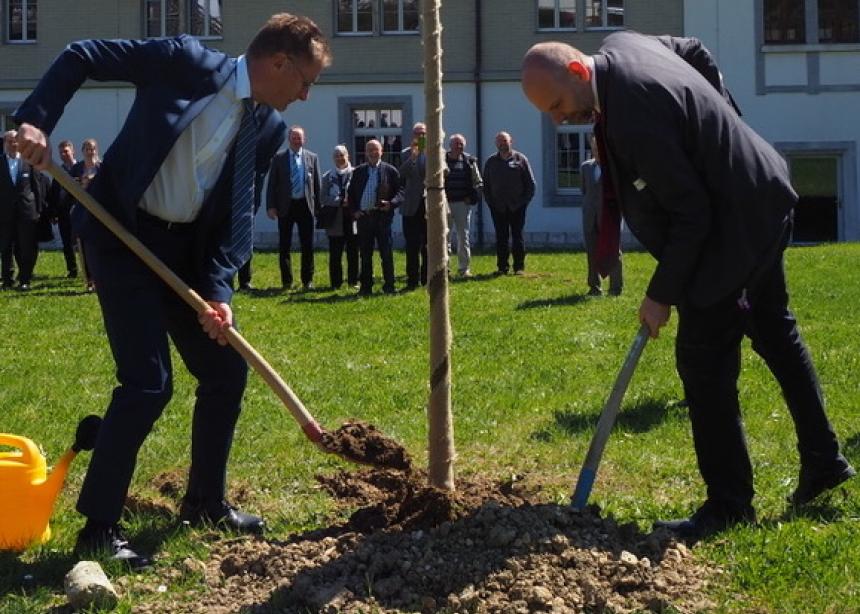 Delegates from every congregation in the Swiss Mennonite Conference (SMC) gathered to offer forgiveness to the government of the canton of Bern in a ceremony at Église évangélique mennonite Tavannes on April 20.

The celebration of reconciliation between Mennonites and government officials concerned persecution of Anabaptists in the region—including 40 executions recorded in Martyrs Mirror—that took place between the 16th and 18th centuries.

Christoph Neuhaus, Bern canton state councillor and director of church affairs, surprised Mennonites nearly two years ago when he offered an apology and asked for forgiveness at an event in Bern’s city hall organized by Bern Mennonite Church and the local Reformed Church parish.

“I apologize tonight for all that has been done to the Anabaptists in our canton,” said Neuhaus, who, at the time, represented the state side of the Reformed Church’s close relationship to the canton government. “No one can undo what was once done. But we can see what has been. Record it instead of casting it out.”

SMC general secretary Jürg Bräker said the action followed the mayor of Zurich identifying past persecutions as wrong in 2004 and asking for forgiveness. “We were delighted with the request for forgiveness,” Bräker said.

Unprepared for the request, SMC discussed internally how to respond to a matter that predominantly affected people centuries earlier.

“We are aware that we cannot really speak for those who suffered under persecution,” Bräker said. “But we know they followed Christ, and we can trust that they would have answered, ‘Yes, we forgive.’”

While the Mennonites’ desire to develop a joint declaration with the canton was not possible, SMC did develop its own statement: “Swiss Mennonites express hope that these steps to reconciliation might free up cooperative energies for peace and justice, which will bring benefit to our land and beyond its borders.”

The statement draws parallels between past persecution of Anabaptist nonconformists and marginalized groups on the fringes of today’s society. It calls on the state to respect and protect space where faith communities function peacefully.

“We confess that our search for forms of life and community that are oriented to Jesus’ life has, at times, led to a smug knowing-better and unjustified claims to moral superiority,” it states. “The striving for a life consistent with the gospel of Jesus Christ has not always sought for peaceable relations with everyone living in the land.”

Bräker said the stories of past persecution have been retold so much that they have become part of Mennonite identity and they influence relations with the state.

While the act of forgiveness is an opportunity to remind the government such oppression should never happen again, it also requires a commitment by the Mennonite community to reflect on how “dissident movements” contribute to—or impair—peaceful coexistence.

In addition to representatives signing the declaration and speeches from SMC officials and canton dignitaries such as Neuhaus, both parties picked up shovels to plant a tree together.

“The emphasis of the celebration was to look into the future and what we both can contribute to living together that is oriented toward just peace,” he said. “A tree has to grow.”

“We planted it together, emphasizing that we both toil the same soil—a common society—but with different instruments.” 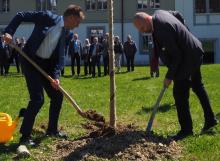