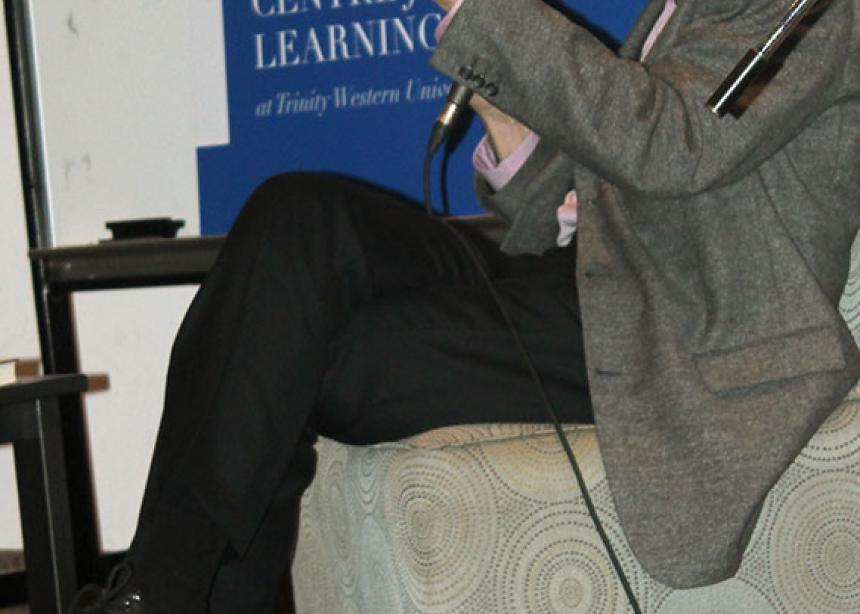 <p>Rudy Wiebe shares themes from his new book, Come Back, with an audience at Trinity Western University in Langley, B.C. (Photo by Amy Dueckman)</p>

Wiebe read from his latest novel, Come Back, a story in which protagonist Hal Wiens processes the death of his son, who committed suicide decades earlier. That struggle is one Wiebe knows intimately, as his own son committed suicide.

The Hal Wiens character first appeared as a child in Peace Shall Destroy Many, Wiebe’s groundbreaking 1962 novel. He described Come Back as “a book about an aging man who is remembering his life.”

Following the book reading and comments, Wiebe answered questions from the audience. One involved fact vs. fiction, and how closely this book reflects Wiebe’s own experience. He answered that he likes creating something new and more effective than facts themselves. “A fact is something that was done,” he said. “In fiction [the writer is] freer.”

Another person asked what role music played in Wiebe’s faith. “At one point I thought I might be an opera singer, but I got lured away into writing,” responded Wiebe, who lives in Edmonton, where he is professor emeritus of English at the University of Alberta. “Music is a marvellous, marvellous solace to the soul.”

The lecture was sponsored by TWU’s Anabaptist-Mennonite Centre for Faith and Learning and emceed by Myron Penner, the centre’s director. 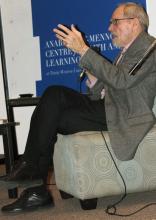 Rudy Wiebe shares themes from his new book, Come Back, with an audience at Trinity Western University in Langley, B.C. (Photo by Amy Dueckman)