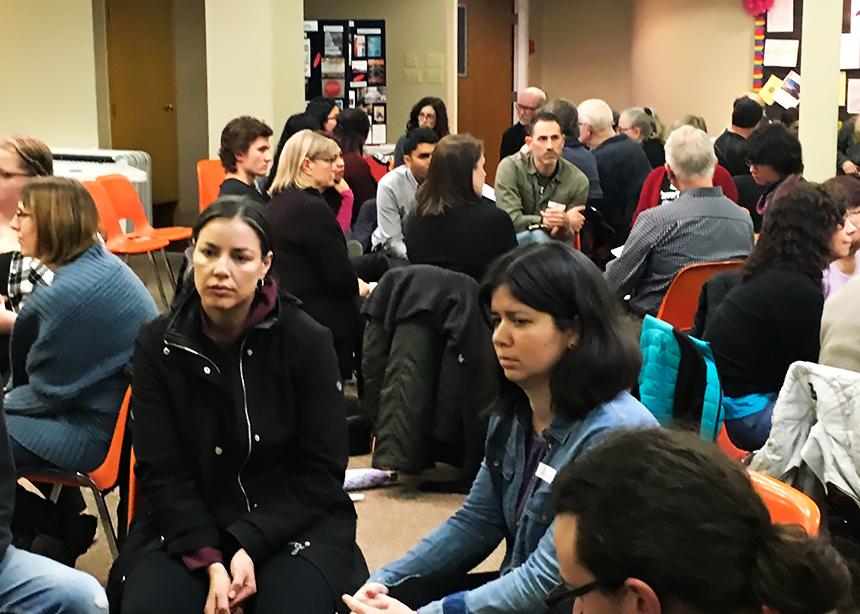 At ‘The cost of colonialism: Joy of jubilee’ workshop in Vancouver last month, a breakout group discusses what jubilee might look like in relation to Indigenous-Settler relations. (Photo by Henry Krause)

An interfaith workshop drew more than 80 registered participants to Peace Church on 52nd on Feb. 7 and 8 to learn about “The cost of colonialism: The joy of jubilee.”

Steve Heinrichs, director of Mennonite Church Canada’s Indigenous-Settler Relations, was the facilitator for the event and its main speaker. Heinrichs is passionate about the church’s call to solidarity and reconciliation with Indigenous Peoples in Canada.

Participants were challenged to take ownership of their identities and responsibilities as settlers.

On Feb. 8, Audrey Segel from Musqueam unceded land emphasized how the elders and ancestors gave her direction and strength to work for justice and reconciliation while reflecting on the cost of colonialism on Indigenous people.

Heinrichs then introduced a group exercise in which participants used words and illustrations on large sheets of newsprint to describe their ideal community. Concepts included housing for all, inclusiveness, food security, worship space, nature and clean water, among others. Each group then stood on its “creation” as Heinrichs read out a scenario of a mining corporation using several tactics to appropriate parts of each community in the interests of mining for coltan, a mineral used in the production of smart phones and consumer electronics.

Heinrichs’s morning lecture, entitled “Facing our shadows: Settler colonialism in the Bible,” dealt with its “colonial” passages: the land covenant with Abraham, laws of Israelite exceptionalism by Moses, and Joshua’s fulfilment of the laws and promises through genocide and assimilation.

The sharing circle that followed indicated that the weekend had raised the participants’ awareness and energized them to action. A group had left earlier to join a blockade of a Vancouver port, to draw attention to the arrest of Wet’suwet’en people and their supporters, including Christian Peacemaker Team members that were on site as observers. The participants also raised funds for the local Musqueam hosts and the Unist’ot’en defence fund. 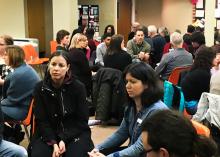 At ‘The cost of colonialism: Joy of jubilee’ workshop in Vancouver last month, a breakout group discusses what jubilee might look like in relation to Indigenous-Settler relations. (Photo by Henry Krause)

What was once a ministry of reconciliation with tangible results (Walter Franz-Lubicon) has devolved into a ministry of political agitation that ADDS to the polarization in our country, ADDS to the polarization in our communion and has no discernible benefit to anyone, except to keep the practitioner of this political agitation employed while his mandate for reconciliation goes unfulfilled. What folly.

It is time to close this chapter. MC Canada is failing, and one significant reason is that the last ministry subsidized by a full wage at MC Canada is not Christian education, family ministry, Biblical literacy, Overseas Mission---but political agitation. Political agitation is designed to antagonize and overthrow. It is not meant to seed, grow, nurture.

When workshop participants go out to participate in a protest on the streets of Vancouver, whom do they serve? Modern day Ba'al and Asherim?

This ministry has failed. It is time to close this chapter.