‘Woodworking is my meditation’

How creating beauty and function with wood intersects with a reflective life. 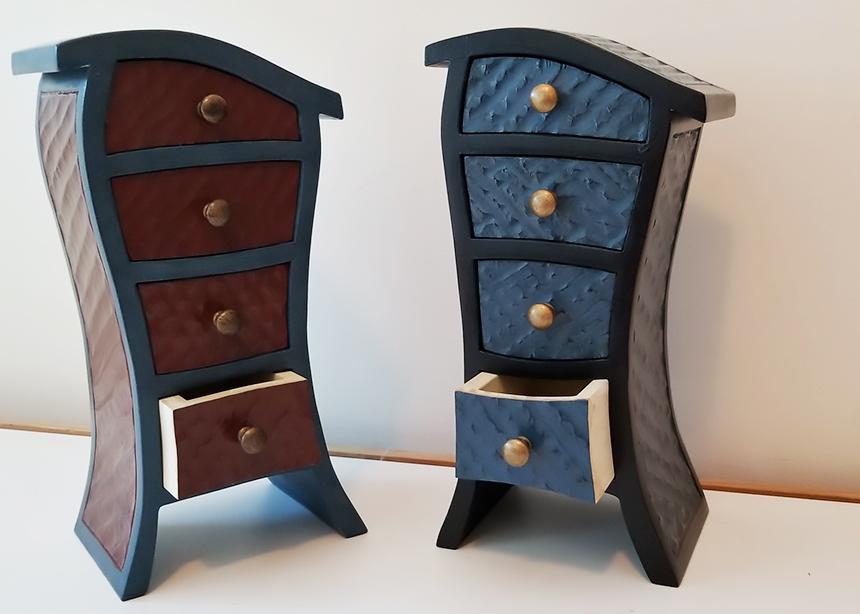 A miniature set of drawers. The wood is carved basswood, painted with milk paint and then burnished to allow the undercoat to show through. (Photo by Gerry Giesbrecht)

When looking for a spiritual activity, a mental-health strategy, or a chance to reflect and see things from a new perspective, woodworking may not immediately come to mind.

But, according to Gerry Giesbrecht, a member of Foothills Mennonite Church in Calgary, and associate professor in the departments of pediatrics and community health sciences at the University of Calgary, “woodworking is my meditation.” He calls his double-car garage his sanctuary, and every piece he creates is inspired in some way by things that carry meaning and purpose.

Giesbrecht’s love for woodworking began around Grade 5, when he built a ladder for Father’s Day. “I painted it John Deere green because it was my dad’s favourite colour,” he says. His next project was a milking stool, since they needed one on the farm. Unfortunately, he got in trouble for using sugar maple, an expensive piece of wood, for the seat and a little too posh for the barn.

He then graduated to using the Sears and Roebuck catalogue for inspiration, and it led to making gifts like night stands, coffee tables or entertainment cabinets for family members.

One year he volunteered with the Vancouver Island Woodworkers Guild that prides itself on woodworking craftmanship and wood recovery. After his volunteer assignment was completed, he was gifted with some of the reclaimed Garry oak from storm-damaged trees. He used it make bunk beds for his daughters.

“These trees [Garry oak] can live to be hundreds of years on Vancouver Island, meaning they have borne witness to a great deal of history,” he says. “One of the pieces that I used to build the bunk beds contained a musket bullet—a hidden reminder of our colonial past.”

“Finding symbols in the work gives it deeper meaning,” says Giesbrecht, who enjoys crafting serving trays because, as followers of Jesus, Mennonites are called to serve and to bless, seeing service as one of their core values.

The last two pastors of Foothills Mennonite received his serving trays as farewell gifts. He intentionally chose to use spalted birch, which was logged by his brother 20 years earlier. What made it special was that, in the process of decaying, the wood became beautiful. He thought it was a perfect wood to recognize the pastors’ past service as well as giving them a beautiful tool to serve others in the future.

Other projects are inspired by nature or architecture, with his goal to achieve aesthetic and functional balance. Examples include steam-bent quilt racks to resemble thick blades of pond grass; and birch and poplar plant stands resembling arches in a cathedral window.

Throughout the years, Giesbrecht has received much joy from woodworking, seeing it as an activity that isn’t just physical, but something that engages his entire being: his creativity, interest and skills.

As he reflects, Giesbrecht says he has grown in compassion as he has discovered his own limitations and how easy it is to make mistakes.

He has also learned that he can’t always make the wood do what he wants: “Trying to exercise dominion is ultimately an exercise in futility, because wood is a material that comes from a living thing and, even though it is not alive when I’m building with it, it has echoes of life.” He says this has led to respecting the wood and “paying more attention to what is around me and how my attempts to shape the world I live in are ‘working with,’ or ‘imposing.’”

These reflections have led to a philosophy Giesbrecht calls “emergent design.” He says, “This is a very organic way of woodworking, where the joy of discovery accompanies the process of creativity.” Instead of controlling the wood, he allows the wood to lead him.

Over the last number of years, Giesbrecht has been donating pieces to the Mennonite Central Committee Alberta relief sales. Because of COVID-19 restrictions, his creations have been piling up at his in-laws’ house, so he is open to selling them and donating the proceeds to MCC. For more details, email him at kidscientist@gmail.com. 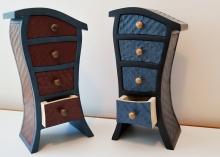 A miniature set of drawers. The wood is carved basswood, painted with milk paint and then burnished to allow the undercoat to show through. (Photo by Gerry Giesbrecht) 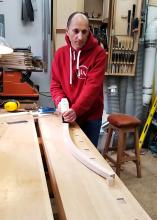 Gerry Giesbrecht of Foothills Mennonite Church in Calgary, in his woodworking sanctuary. (Photo by Pamela Giesbrecht) 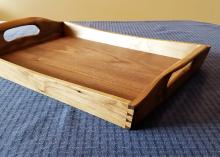 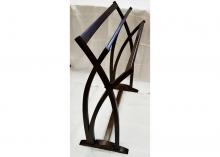 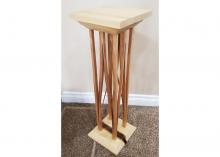 Steam-bent plant stand resembling cathedral windows. The bottom and top are poplar and the middle column is birch. (Photo by Gerry Giesbrecht) 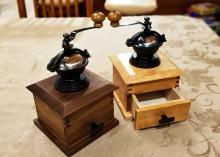 Two antique style ceramic burr coffee grinders. The left one is black walnut and the right is cherry. (Photo by Gerry Giesbrecht) 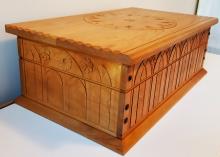 A 17th-century style chest with hand-carved gothic arches and Tudor roses. The wood is aspen with a pine base. The pins are black walnut. (Photo by Gerry Giesbrecht)