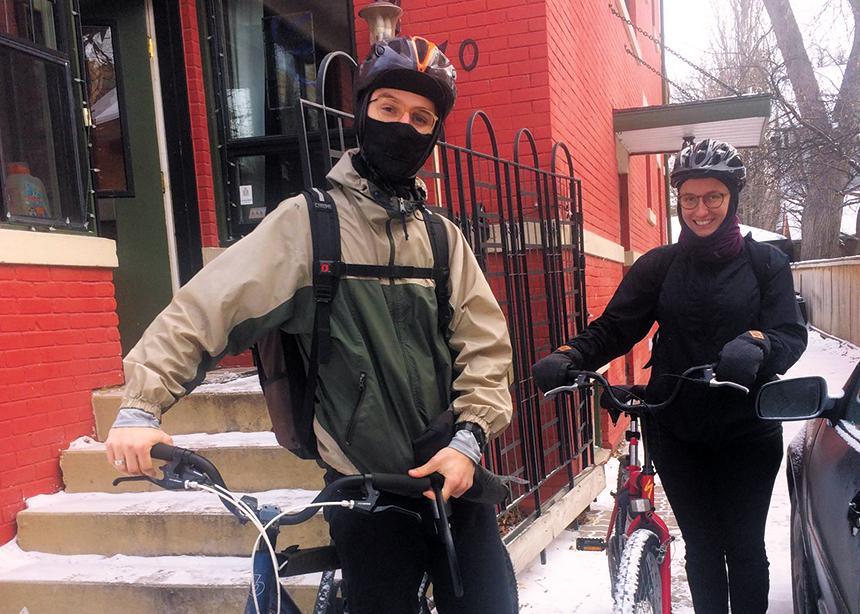 While a polar vortex and temperatures of -50C with the wind chill attacked Winnipeg, most people scurried from building to building, trying to be outside as little as possible.

All except a select few: the winter cyclists. Snapping on ski goggles and carefully covering every inch of exposed skin, these commuters brave the cold, snow and ice to bike all 12 months of the year.

Michael Veith, 25, has been winter biking for four years and uses it as his main mode of transportation, averaging about 10 kilometres a day. “It makes me feel amazing!” he says. “There is nothing like being groggy, waking up and then arriving [at work] feeling refreshed and rejuvenated!”

While many Winnipeggers complain about the seemingly endless and frigid winter, Veith, who attends Home Street Mennonite in Winnipeg, says many of those people just don’t dress properly for the weather even when they have the means. When he cycles, he wears multiple layers, gloves, a merino wool skullcap, neck warmer and ski goggles. The careful preparation cycling demands has helped him take fuller advantage of all winter has to offer and has increased his appreciation for the season.

Val Smith, a member of Charleswood Mennonite in Winnipeg, uses her bike for her regular commute to work, too. The 44-year-old has been winter biking for close to a decade and appreciates how it benefits her mental and physical health. Many people think you need to be a professional athlete or super fit to cycle in the winter, but she says that’s not the case: “I think there are quite a few people for whom it seems like a crazy thing. But it’s not! I’m just a regular mom biking to work.”

Emily Hamm, 23, is one of those enthusiastic people. Hamm, who attends Hope Mennonite in Winnipeg, has been riding her bike almost every day of the week, 12 months a year, for the last two years, although she began exploring winter biking four years ago.

“[Winter cycling] makes my life better,” she says. “I get exercise every day, which helps me maintain better mental health during the winter. I breathe fresh air. I pay attention to the world around me. I choose to commit to fewer things so that it’s possible for me to get to each of my commitments. I have a sense of the earth that I live on because every part of the weather and the ground and the air determines how my ride will go.”

This isn’t to say the freezing journeys don’t have their challenges. Although Smith’s bike continued to perform at -35C, some parts stopped functioning when temperatures reached -40C, and she ended up having to alternate between walking and biking during a morning ride to work.

Even more troubling is the ice, deep snow and cars on the road, says Veith.

For Hamm, the hardest part is accepting that she could do so many more things if she were to drive everywhere and that she has to change the way she makes choices.

There’s a reason they continue, though. Besides how it makes them feel, all three cyclists emphasize that winter biking is by far the cheapest way to commute and a way to achieve transportation with zero carbon emissions throughout the whole year.

The key thing about winter cycling is to not give up right away, says Veith. “You have to be committed to trying to find a system that works for you, and then it will be great.” 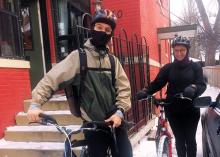 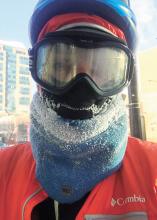 Michael Veith, bundled up and frosty, after a winter bike ride. (Photo courtesy of Michael Veith) 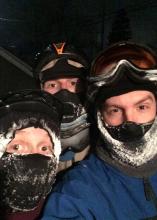 A passion for cold commuting runs in the family. Michael Veith, centre, and his siblings Marika, left, and Matt are all avid winter cyclists. (Photo courtesy of Michael Veith)