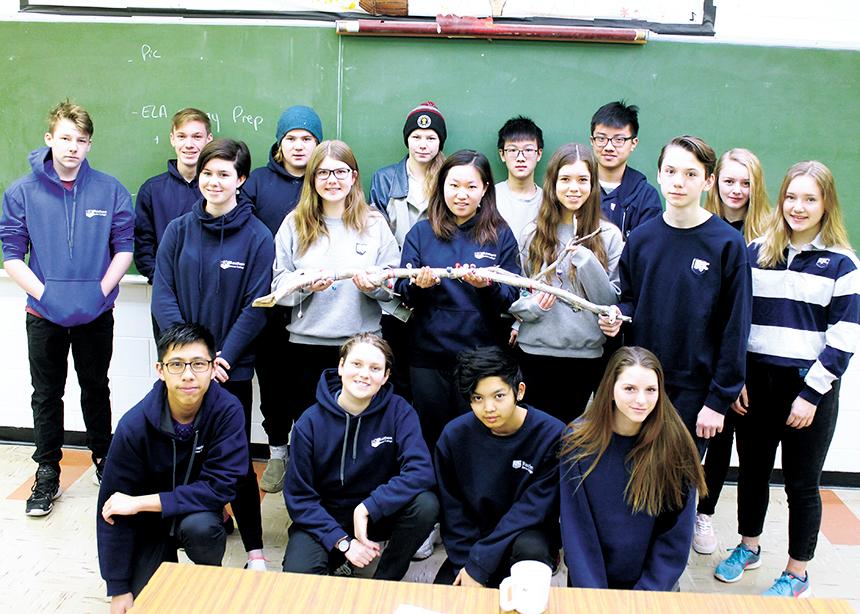 It’s called the Win-Stick and it tells a story. Created by the Grade 10 class at Rosthern Junior College (RJC), the Win-Stick expresses some of what they learned during a class trip to Winnipeg.

The trip, which took place early last December, focused on the theme “Insiders and outsiders,” and included visits to the Canadian Museum for Human Rights, The Forks National Historic Site and the Manitoba Museum.

At Initiatives for Just Communities, the students met Russ, a participant in a support program for adults with fetal alcohol syndrome disorder. As he told them his life story, Russ used a story stick, explaining to students that this method of storytelling is important in his Indigenous culture.

When students returned to the classroom, teachers David Epp and Zac Schellenberg invited them to reflect on their learning experience in a similar way, using a stick found on the RJC campus.

First, numbers were assigned to the different places, events or themes that students explored on the trip. Each student selected a number to burn into the stick and decided on its placement on the stick. No. 6, for instance, represented prisoners in Canada; the student who burned it into the stick chose to place it far away from other marks because prisoners are isolated from society. No. 17 represented the Holocaust; the student who placed it on the stick wrote, “I placed my mark on the bottom, far away from the good things. The Holocaust was a terrible thing, so it should be separated from the items on the top.”

In addition to the numbers, students painted wooden beads to represent what they learned that held the greatest significance for them. Then they tied their beads to the stick using coloured thread; each colour represented a concept such as “fairness,” “difference,” “uncomfortable,” or “respect.” Again, the students were encouraged to choose colours that expressed their experience and tie their bead at a place on the stick that had meaning for them.

Faith Akers painted her bead a mixture of browns, beiges and whites. She says, “It represents the world with all different shades of skin, and how we all live together and all deserve equal rights.” She says she found her class’s visit to the Canadian Museum for Human Rights to be most impactful, especially what she learned about Indigenous people through exhibits on residential schools and the Red Dress Project, which is an artistic response to the missing and murdered Indigenous women and girls in Canada.

Her classmate, Magda Metcalfe, chose what she learned about genocide and the Holocaust as the inspiration for her red and black marbled bead. For her, the colours represent blood, death and darkness, but also rebirth. “Through darkness [people are] able to heal and rebuild,” says Metcalfe.

Isabel Atherton-Reimer also used the colour red, but, for her, red represents women’s rights. On her red bead, she painted two dates: 1920, the year women were legally recognized as human beings in Canada; and 1982, the year Indigenous women were granted their own treaty status. She, too, found the Red Dress Project impactful. “It’s hard to believe that can still happen today,” she says.

Danielle Choi, an international student from Korea, painted multi-coloured stripes converging at one central point on her bead. She appreciated meeting with other international students at Canadian Mennonite University and wanted her bead to represent people with different interests and abilities coming together. She intentionally placed her bead at a fork on the story stick, saying, “I wanted to express how different people meet at one place.”

The four girls admit that what they learned in Winnipeg is just the tip of the proverbial iceberg.

Atherton-Reimer notes, “The [Canadian Museum for Human Rights] is so big, we couldn’t see it all.”

“Everybody needs to know about this,” says Metcalfe, reflecting on what she learned about injustice, particularly towards Indigenous women. “It’s kind of sad that we’re in Grade 10 and never knew this before.”

Atherton-Reimer admits that with their newfound knowledge comes responsibility. “If we have a chance, we have to do something about it,” she says, referring to the injustices they learned about.

Akers agrees. “I can’t sit back and do nothing anymore,” she says. “I want to do my little.” 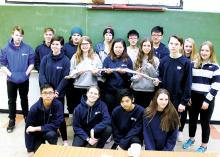 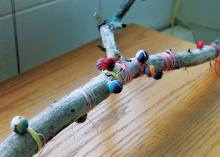 The Win-Stick, created by RJC’s Grade 10 students, tells the story of their class trip to Winnipeg, where they learned about many forms of injustice through the theme “Insiders and outsiders.” (Photo by Donna Schulz)