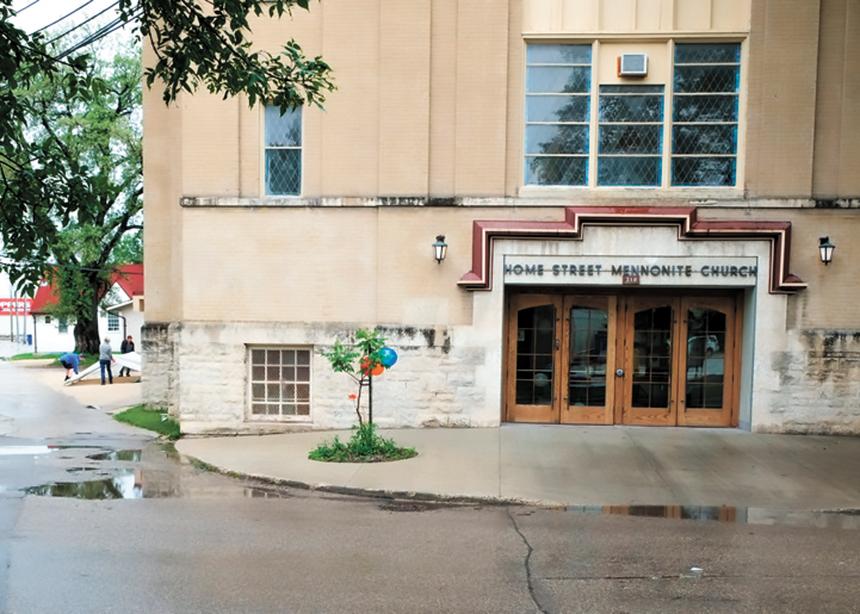 Every Sunday morning at Home Street Mennonite Church, two ushers hand out bulletins and seat guests for the worship service. But an hour earlier, a group of “Third Ushers” is already busy, welcoming in the church’s inner-city neighbours.

Third Usher, now called Coffee & Conversation (C&C), has been running for 15 years, providing hospitality through coffee, food and conversation to anyone who walks through the Winnipeg church’s doors.

Ten or so volunteers take turns, in pairs, organizing the fellowship time that runs during the church’s Sunday school hour. Sometimes people coming in from the street will listen in on the adult education class, and congregants often pick up mugs and join tables after the session is over.

“For us, it’s a matter of knowing what is church?” says Bert Siemens, C&C’s coordinator, about why the church runs the program. “And for a lot of the people who’ve come for coffee, they’ve seen our church as their community, too. . . . They feel it’s a safe spot.”

The organizers never know who is going to show up; it could be three or 15, says Esther Epp-Tiessen, the church’s mission coordinator and a C&C volunteer. There are many regulars, though, people who keep coming back over and over, and have developed deeper relationships with church members as a result, she says.

Some of them occasionally stay for the worship service and one person even became a church member, although that is certainly not the goal of the group, says Siemens.

Home Street is located in a poor neighbourhood in downtown Winnipeg. Most C&C participants come from within walking distance and live in the area, although some of them walk a long way.

“There’s one man who walks all the way from St. Boniface almost every Sunday,” Epp-Tiessen says. That’s at least four kilometres each way.

The initiative began in 2005 out of a desire to respond to people who came to the church doors asking for help. It was thought up by an intergenerational group of about 15 people within the church that had formed the year before, with a desire to be more regularly involved in the neighbourhood.

“We learned a lot in those first years about how to listen deeply, how to build bridges across socio-economic divides, and how to create a safe space within our church building,” says Pastor Judith Friesen Epp, who was one of C&C’s founders.

Most of their neighbours “have had a hard life. The stories they share are sad stories,” Epp-Tiessen says. Just in the last several months, a few people who used to attend C&C died tragically. But “there are also times we laugh a lot and have fun together,” she says. “I’m often struck by the incredible resilience of some of these folks, given what they have lived through.”

“I think it’s made us a bit more aware of . . . issues of poverty and accessibility to basic things like showers and washroom facilities, and what it means to be without a home for some people, the home being either a physical thing or a community,” says Siemens.

“We have learned one another’s names, shared our stories and seen the face of Christ in each other,” says Friesen Epp. “The ‘issues’ of poverty and injustice now have faces and names and stories. This constantly raises the questions, ‘What is our role and responsibility as a worshipping community in this neighbourhood?’ . . . ‘How do we actively work for justice together?’ ”

“We, as a church, have gained a lot through C&C,” says Epp-Tiessen. “We’ve learned and received a lot from the people who come. It’s not just something that we do for others, it has also been a blessing for us.”

In addition to C&C, Home Street hosts an annual block party; distributes food hampers for Winnipeg Harvest, the city’s food bank; and actively works at Indigenous-Settler reconciliation. In 2018, the church endorsed the Make Poverty History Manitoba initiative, “Winnipeg without poverty: Calling on the city to lead.”

Created in partnership with people living in poverty, the plan contains 50 recommendations for municipal action, addressing issues such as housing, transportation, food security, policing, reconciliation and more. Home Street members signed on in an effort to support systemic policy changes that could help build a more just city, asking Mennonite Church Manitoba to encourage other churches to do the same.

This article appears in the Jan. 20, 2020 print issue with the headline, "Connecting through coffee and conversation." 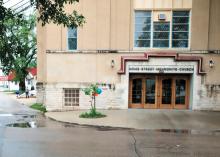 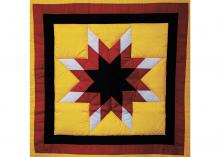 A star blanket, sewn by an Indigenous women's collective in Winnipeg, hangs in the Coffee and Conversation space at Home Street Mennonite Church. It symbolizes the congregation’s commitment to be treaty people and strive for reconciliation between Indigenous and non-Indigenous people. (Photo by Esther Epp-Tiessen)