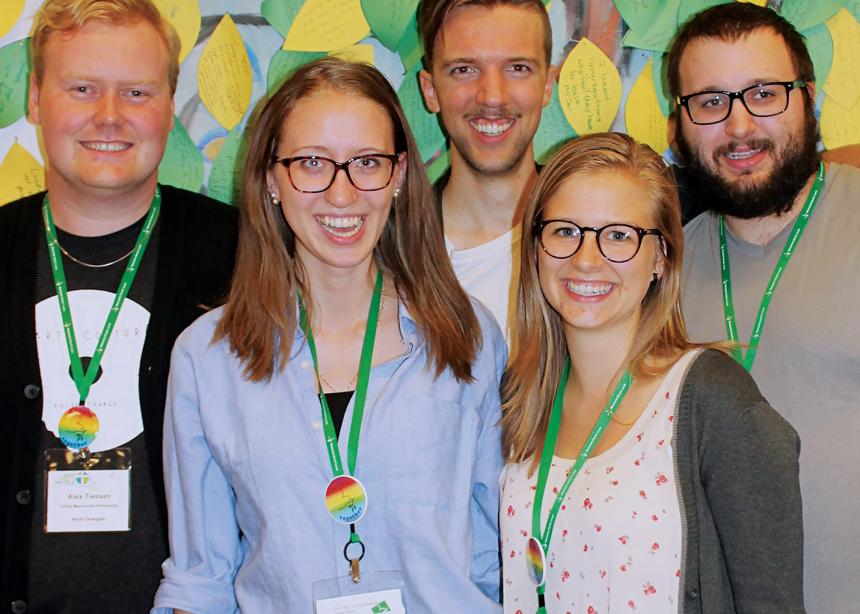 A group of young adults who formed in response to proposed changes to Mennonite Church Canada (now dubbed the nationwide church) has disbanded.

The Emerging Voices Initiative (EVI) announced its closing in a statement posted to its website on Oct. 31, two-and-a-half weeks after MC Canada’s Special Assembly 2017 in Winnipeg.

“As [MC] Canada delegates have affirmed a new church structure, we have decided to formally discontinue Emerging Voices Initiative,” the group wrote. “When we began, we focussed on the Future Directions Task Force’s final report, asking questions about the changing structure, and providing a forum for others to do so. We tried to listen closely and respond faithfully. With the new structure affirmed, our chosen task has reached a fitting end.”

For Laura Carr-Pries, an EVI member since its inception in late 2015, one of the best parts of participating in the group was seeing the progress it made in less than two years of existence. The 22-year-old told Canadian Mennonite she remembers a meeting early on with MC Canada executive director Willard Metzger (now executive minister), during which she felt as though the group was meeting some resistance.

In the months that followed, EVI members found ways to make their voices heard, whether it was on EVI’s website and through social media, at the special assembly, at the delegate assembly in Saskatoon in July 2016, or during the workshop tour the group organized in conjunction with MC Canada. (See more about the tour at “EVI listening tour roundup.”)

“When we began, it was almost like we were fighting for this space to get our voices heard,” Carr-Pries said. “Just realizing how far we’ve come is a highlight.”

Although not exclusively a group for young adults, EVI was made up primarily of students in their 20s from Canadian Mennonite University (CMU) in Winnipeg. The group formed after an initial meeting towards the end of 2015, during which students and university administration discussed some of the challenges facing MC Canada, including the recommendations of the Task Force. More than 40 students participated in that first meeting, with between 15 and 20 going on to form EVI.

One of the biggest highlights of the experience for EVI member Stephanie Wenger was the group’s weekly meetings, which usually involved a potluck. “It was refreshing to see there were other people like me who care about the church, because sometimes it feels like there isn’t at all,” said Wenger, 25. “You go to a congregation, and there’s only one or two other young adults, and they’re not necessarily invested.”

Another EVI member, Anika Reynar, said that one of the biggest things she learned from being part of the group is that the church is big. This became especially clear to her when she travelled to Alberta and B.C. as part of EVI’s tour.

Metzger said he has been grateful for EVI’s work. “They provided a platform for conversation not only among fellow young adults, but I think [they] also created a platform that engaged many other people across demographics and across our nation,” he said. “[Their] enthusiasm welcomed other people into the conversation.”

“I hope that the example of EVI will prove to be invitational for other students—young adults, high school students—to also lend their voice [and] to become engaged,” he added. (Read here about how EVI helped youth participate in Special Assembly 2017.)

EVI members hope for the same thing, saying in their statement, “Instead of continuing as a group, we want our story to encourage young people to be heard in their own church settings. We hope the church will create and maintain space for young voices without the container of Emerging Voices Initiative.”

Carr-Pries, Wenger and Reynar are looking forward to continued involvement in both the local and nationwide churches. “I’m excited that EVI is officially not a group anymore, but we’re still around and all doing the same things,” Wenger said.

Reynar recalled being at Special Assembly 2017 and observing delegates her parents’ age who have a long history with one another, greeting each other and talking together between sessions. “I said to Laura, we’re going to be those people when we’re 50,” Reynar said. “We’re not all best friends, but it’s this sense [that] we’re working at being the church together in a way that feels like it’s going to continue on past what EVI was. . . . That’s pretty cool.”

More about EVI’s vision and activities:
Youth wanted
Hearing each other
Laments and hopes for MC Canada
EVI announces workshop tour
Do young people care about the future of the church? 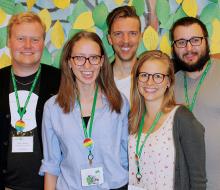 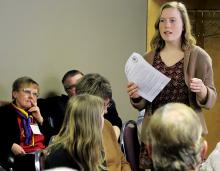 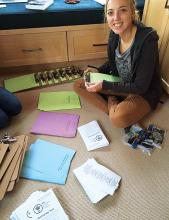