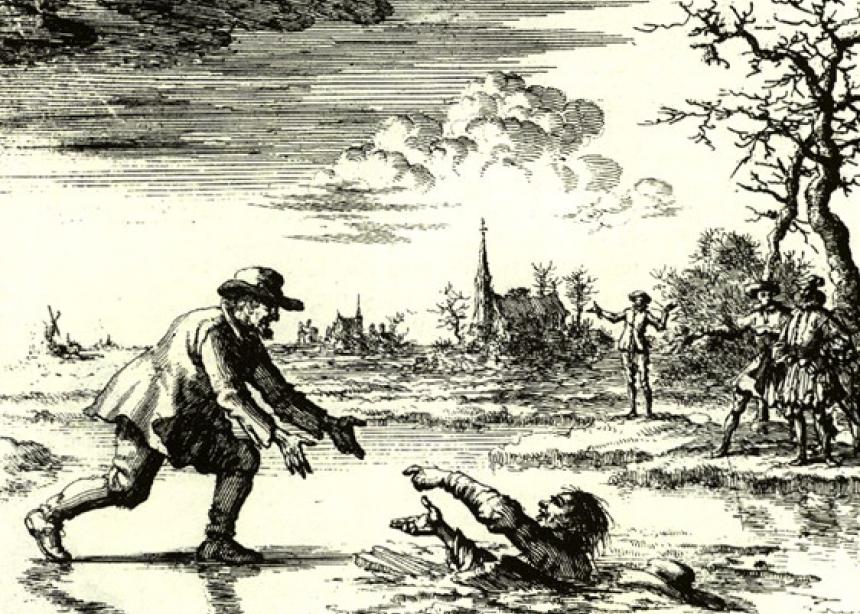 Based on an engraving of Willems, by Jan Luyken in Martyrs Mirror, the monument is intended to recognize the Anabaptist ideals of peacemaking.

The life-size statue, to be completed in 2018, will be the focal point of a new peace exhibit at Mennonite Heritage Village in Steinbach, Man. The Village attracts 40,000 visitors per year from around the world.

Sawatzky is renowned for various sculptures, including the “Seal River Crossing,” a 29-foot-long sculpture of nine caribou in downtown Winnipeg, as well as a 21-foot York boat in Selkirk.

Willems was one of around 4,000 martyrs killed in Europe in the 1500s. Holding to the doctrine that one should only be baptized upon confession of faith, Anabaptists re-baptized adult believers and refused to baptize infants. Willems became known for rescuing his captor after breaking out of prison. He was burned at the stake on May 16, 1569 near his home village of Asperen in the Netherlands.

The commissioning of the bronze, life-size statue involves something of a leap of faith for the committee, according to Peace Exhibit Committee chair Elbert Toews.

The sculpture and base will cost over $100,000. The completed peace exhibit, which will include an interpretive centre and cairn to recognize Mennonite conscientious objectors, will cost several hundred thousand dollars more. Mennonite Heritage Village is soliciting donations.

“In 2025 it will be 500 years since Anabaptist history started in Zurich, Switzerland,” says committee member and historian Harvey Plett.

The committee felt that the Willems monument would symbolize well the spirit of the martyrs.

According to the account in Martyrs Mirror, Willems was imprisoned in a castle turned prison and escaped by letting himself out of a window with a rope made of knotted rags. Emaciated from his imprisonment, he did not break through the ice surrounding the castle, but his heavier pursuer broke through.

Willems, hearing his guard’s call for help, turned back and rescued him. The guard wanted to release him, but the mayor ordered his recapture and imprisonment.

In 2007, a Mennonite delegation to the Vatican gave Pope Benedict XVI a framed picture of Willems saving his persecutor. Pope Benedict spoke of a common understanding of non-violence and active peacemaking at the heart of the gospel and a continuing search for unity. 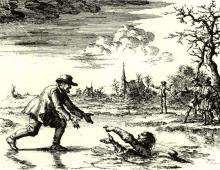