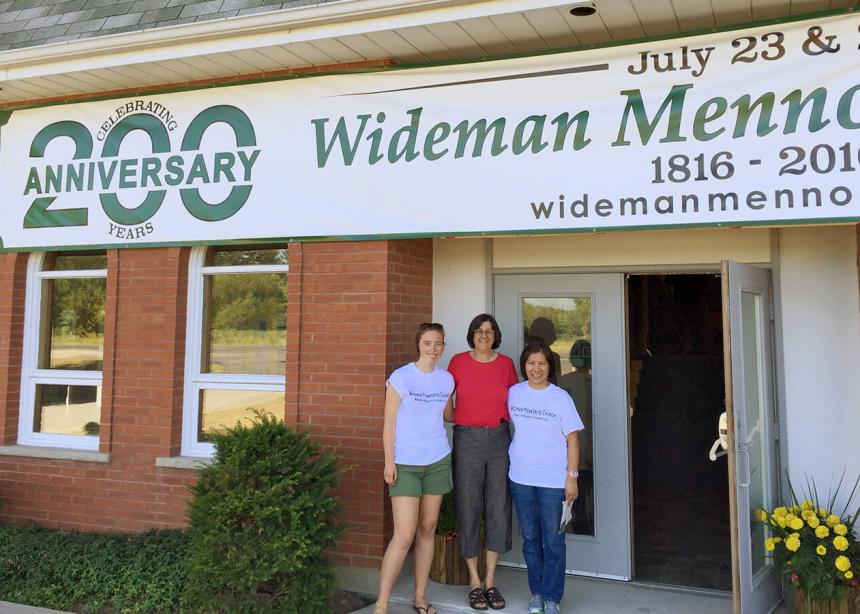 Hannah Taylor, left, Linda Ramer and Milissa Fortier stand beside an 'open door' welcoming guests to a barbecue and hymn sing that were part of Wideman Mennonite Church's 200th-anniversary celebrations over the weekend of July 23-24. (Photo by Joanna Reesor-McDowell)

Hundreds of friends from near and far attended Wideman Mennonite Church‘s 200th-anniversary celebrations over the July 23-24, 2018, weekend. It was a culmination of special activities over the past few months that helped members mark this significant milestone.

Beginning in January, a few minutes during each weekly worship service were devoted to sharing stories from the past. Monthly Sunday evening hymn sings started in April, with guest musicians and worship leaders returning to Wideman from other communities.

Wideman Mennonite Church is one of the oldest Mennonite congregations in Canada. The group began meeting in homes soon after Henry Wideman, its first minister, arrived in York County in 1803 as part of a migration from Pennsylvania to Ontario early in the 19th century. Sadly, he died in 1810 from a falling tree while clearing land. The congregation decided to build a log church in 1816, the first of several buildings and subsequent additions that have served the community over the next two centuries.

Beginning in the 1870s, tensions and controversies erupted over issues such as having Sunday school or the use of English in the services. During this period, some members left to help form the Mennonite Brethren in Christ congregation—later called the Missionary Church—in 1872, and the more conservative Wisler Church in 1889.

Sunday school and English as the language for worship were established by the 1890s, making Wideman more accessible to the community. J.S. Coffman preached at the first evangelistic meeting in 1892, and 22 converts were received from outside the congregation. Through the years, members of Wideman Mennonite were supportive of sister congregations that formed in the area: Cedar Grove, Danforth and Hagerman Mennonite churches.

The late 20th century brought massive changes to the community served by the congregation, as the Greater Toronto Area experienced unrelenting growth. Traditionally, most families in the church were farmers, and many moved away to other communities in Ontario where land and housing were more affordable.

A smaller and more diverse congregation remains. Although some members can trace their roots back to the original pioneers in the area, many come from other backgrounds. They engage with the community in meaningful ways: providing a space for Alcoholics Anonymous meetings, supporting an active sewing group, and sharing space with the Journey Church, a Mandarin-speaking congregation.

Wideman’s leadership group has committed regular time to prayer and is open to change and transformation as it looks to the future of the congregation with the support of Ken and Dawn Driedger, who have agreed to be their co-pastors for a two-year period.

Hannah Taylor, left, Linda Ramer and Milissa Fortier stand beside an 'open door' welcoming guests to a barbecue and hymn sing that were part of Wideman Mennonite Church's 200th-anniversary celebrations over the weekend of July 23-24. (Photo by Joanna Reesor-McDowell) 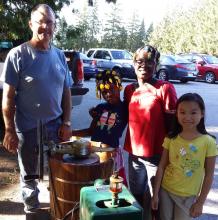 Congratulations to all of you at Wideman Mennonite for persevering in your goodly heritage. As a child, I was a visitor with my dear parents at Almira Mennonite and Altona Mennonite meetinghouses and the dear old people there were always mindful and prayerful for the congregations at Widemans and Reesors and Cedar Grove. Much more recently I became friends with Doug and Murial Hoover who also cared deeply for Wideman Mennonite. I dug thru my old files and want to honour the Mennonite ministers and deacons who served at Wideman. You will find most of them were buried in the old cemetery beside Wideman Mennonite Church.