Why not a letter?

The beauty of slow tech 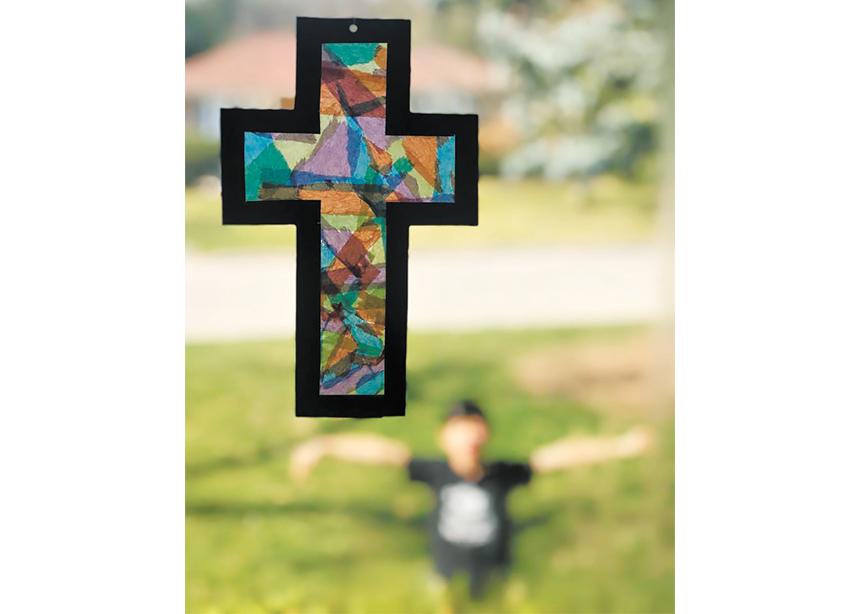 Jaxon Gin, a children’s ministry member of Toronto Chinese Mennonite Church, is pictured with a stained-glass cross he made. (Photo by Grace Ho)

“Let us consider how we may spur one another toward love and good deeds, not giving up meeting together, as some are in the habit of doing, but encouraging one another—and all the more as you see the day approaching” (Hebrews 10:24-25).

What does biblical togetherness look like during a pandemic?

For Toronto Chinese Mennonite Church in the East-End of the city, there have been warm greetings, collective singing, sharing communion and post-service conversations through online worship. However, for many in the congregation, a sense of togetherness is missing, causing many to lament this loss.

The church was planted in 1979 by former pastor Winfred Soong and his wife, as a ministry for newly landed Chinese immigrant families. Today, it  continues this legacy and has become a church consisting of three congregations—English, Cantonese, and Mandarin—with family members from all generations integrated in each community. The intergenerational nature of the congregation is unique and has been strengthened during the pandemic.

For some, technology has been a blessing, allowing congregational members to connect in new ways, but not everyone has had access to this. Many seniors from the church drop-in group, Kei Lok Yuen (KLY), suddenly found themselves at home alone. Without regular in-person gatherings, they quickly became discouraged and isolated.

The church began wondering how it could connect with its seniors and the community. What would be the most affordable technology? A thought percolated among church members of a return to slow technology: mailed letters.

Letter writing quickly became an integral part of the church’s ministries in reaching its seniors, and was inspired by a local initiative called “Letters of love for seniors,” a community project led by Nathaniel Erskine-Smith, the local Member of Parliament, who recognized the importance of keeping seniors connected.

The church’s children’s ministry contributed to the 700 handwritten letters that were sent out, alongside 14 local schools, to seniors in the neighbourhood, including Toronto Chinese Mennonite’s KLY group.

Beka Ly, a  Sunday school teacher, described the process as “heart-lifting when the children drew beautiful pictures and learned how to write encouraging notes and verses in Chinese.” These children’s letters were a reminder to the seniors that God loves them and that they were not forgotten.

It turned out that seniors were not the only ones feeling isolated. Many church youths felt the same, as they struggled to stay focused with long hours of virtual learning. Witnessing these challenges, the church decided to launch a mentoring project that paired students with adult members, who decided to extend the letter-writing campaign to their youth.

For some, letters became a meaningful approach to friendship and mentorship. Mentors have exchanged Bible verses and stories, and have offered encouragement.

Keira Hum, one of the church youths says, “When someone sends you a letter, it shows how much they care—the time and effort used—instead of a computer-generated message.”

Rediscovering the beauty and appeal of letter writing has been one of the ways the church continues to build trust and deep relationships. “Mail connects people. It’s like a present you can cherish and keep it as a memory forever,” she says.

Relational initiatives did not end there. Although parents were feeling connected with online church, they noticed their children were becoming less engaged each week. Kang Liang, one of the parents said, “Some children didn’t want to attend Sunday school anymore because online is challenging for them.”

Toronto Chinese Mennonite  mobilized its efforts to assemble craft-kits with art supplies, materials and an occasional treat. Ly describes the craft-kits as a mystery. “We open up the envelop together on Sunday and dump out all the contents,” she says. “It brings excitement into learning virtually through artful creations made together.”

The children became increasingly involved and now often share their creations during virtual church events. Liang says, “Seeing the crafts on our walls and fridges reminds us that we are still together because God is with us.”

Christen Kong is a member of Toronto Chinese Mennonite Church. 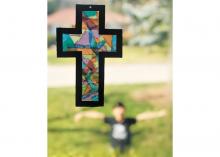 Jaxon Gin, a children’s ministry member of Toronto Chinese Mennonite Church, is pictured with a stained-glass cross he made. (Photo by Grace Ho)