Why Mennonites love their gardens 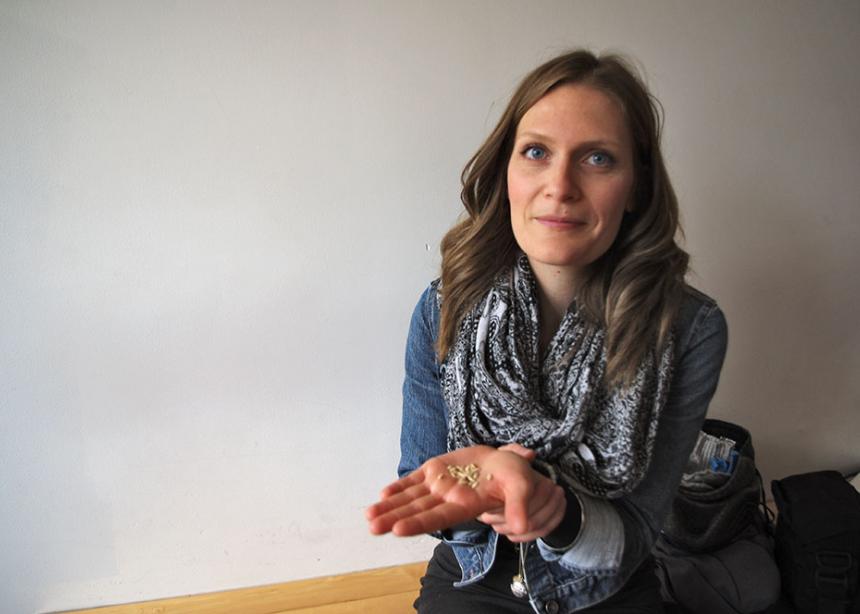 <p>Susie Fisher holds a handful of heritage cucumber seeds given to her by a Mennonite couple in Winkler, Manitoba. (Photo by J. Neufeld)</p>

In the village of Neubergthal in southern Manitoba, gnarled cottonwoods with deeply grooved trunks line the village streets and cluster along the edge of farmyards. Cottonwoods here and in nearby towns bear nostalgic meaning for many Mennonites. According to local mythology, the cottonwoods are descended from Russian trees brought to Canada as saplings or seeds by Mennonite immigrants in the 1870s. Some of them were planted on the graves of loved ones.

These emotional connections between people and plants fascinate Susie Fisher, a 31-year-old historian writing her doctoral dissertation on Mennonites and their gardens. Fisher isn’t a botanist. She completed an M.A. in religious studies at McMaster University and is working on a PhD in history at the University of Manitoba. She set out to write her dissertation on the emotional history of Mennonites who settled in the West Reserve—an area of 17 townships west of the Red River granted to Mennonites by the Canadian government in 1876. But when she started conducting interviews, she ran into trouble.

“I started realizing Mennonites don’t talk easily about their emotions,” Fisher says. Conversations drifted towards earthly things: trees, plants, gardens, tools, summer kitchens. Fisher discovered these very items of material culture contained the stories she was looking for. “A lot of them had to do with the land. So I thought, why not write my whole dissertation on the garden?”

A year ago Fisher bought an old house in the town of Gretna and moved into the heart of the West Reserve to better focus on her research. Since then she’s spent many an hour sitting in sunny kitchens, drinking coffee and talking to people about their gardens.

That’s when the stories come pouring out—stories of cuttings from a yellow rosebush brought over from Russia and confiscated by immigration officials, of seeds sewn into the hems of dresses and hidden in corsets, of dolls stuffed with beans or wheat. People have shown her acorns believed to be descended from an 800-year-old oak in Ukraine known as the Chortitza Oak, as well as the seeds of melons, plums, marigolds, zinnias and many other plants that once grew in Russian gardens.

Mennonites who emigrated from Russia in the late 1800s left behind elaborately cultivated flower gardens and orchards that were central to community life. Russian Mennonites sometimes celebrated weddings and funerals in their gardens. Often family members were buried there. When the Mennonites came to Canada, they sought to recreate some of that culture here on the prairies.

Fisher has yet to find an official archival record of seeds or plants brought over from Russia. In fact, botanical records from Neubergthal suggest the storied cottonwoods were likely transplanted from nearby riverbanks. But for Fisher’s purposes, the stories themselves matter more than the facts. “These stories speak to the efforts of trying to transplant a life and peoplehood into a new place,” she says.

An agricultural people understandably has deep emotional ties to seeds. One Mennonite gardener Fisher spoke to believes the Mennonites never really got over the trauma of their migration from Russia. “He thinks the reason people have so much energy and care for the seeds is that they represent life—that the seeds are life manifest,” says Fisher.

Fisher isn’t Mennonite. She grew up in Winnipeg in a secular family with English, Irish and Italian roots. But when her parents split up, Fisher’s mother sent her and her sister to Westgate Mennonite Collegiate. “I wonder if she wanted to give us a spiritual community that she didn’t feel she could do on her own,” says Fisher. Growing up among Mennonites turned out to be a “wonderful thing” for Fisher. “It changed my life to be close to a people with a religion and ethnicity that are so intertwined and a life that’s so rooted in Manitoba,” she says.

Fisher’s current research project doesn’t extend beyond the 1950s, but she sees an interesting link between her work and the new wave of young urban Mennonites working on organic farms or moving back to the country to start their own market gardens. She speculates that the impulse is coloured by nostalgia. “The root of the word is nostos—meaning a longing to return home. It’s there for these people too—just not for their home, but the home of their ancestors.”

Susie Fisher holds a handful of heritage cucumber seeds given to her by a Mennonite couple in Winkler, Manitoba. (Photo by J. Neufeld)

Bean seeds from the 1930s found in an attic near Mitchell, Manitoba. (Photo by Susie Fisher)

Women shelling beans in their garden in the 1930s near Horndean. (Photo courtesy of Carol Penner)