Whoever has a nose, let them smell 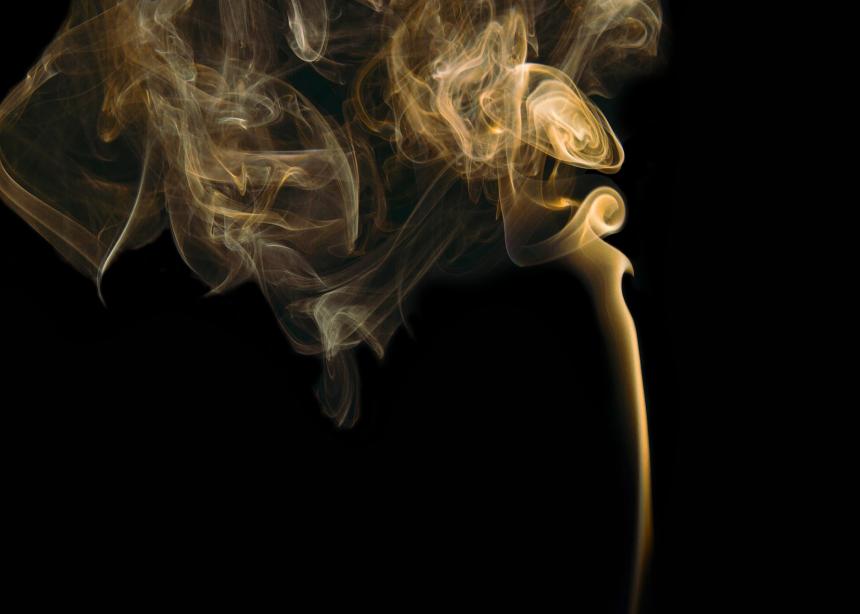 It was the first Sunday of Advent and we had lit a single candle in our living room as part of our online worship service. Our Advent wreath was neatly set up on the coffee table, safely away from anything flammable, and our children are old enough to know to be careful with fire.

Afterwards, my family transitioned from watching our service on the TV to a Sunday school Zoom chat on the laptop at the kitchen table. While we were all in the kitchen, our noses detected an awful burning smell. Still new to our house, I tried to imagine what unknown disaster we had inherited.

As I returned to the living room to investigate, the smell intensified, but it took my eyes and brain a few moments to clue in to what was happening before me. I realized the candle had been left burning, but it still stood there innocently enough, the flame still contained, with no immediate evidence that it was the culprit. Then, on the floor, I beheld strange, poofy, curled ashes that I couldn’t identify or figure out their origin.

While I stared, perplexed, our cat Ember appeared from around the coffee table. Instantly, everything made sense, when I saw her singed tail.

The name Ember, chosen for her black and orange colouring, now took on a new meaning. She must have jumped up on the coffee table and her tail had passed over the flame, instantly singeing her light, fluffy, tail fur. Thankfully, there were no serious burns. In fact, she seemed oblivious to what had happened, but the stench of that burned hair lingered in our house for a long time.

“Now, son of man, take a sharp sword and use it as a barber’s razor to shave your head and your beard. Then take a set of scales and divide up the hair. When the days of your siege come to an end, burn a third of the hair inside the city. . .” (Ezekiel 5:1-2).

When Ezekiel was instructed to burn his hair, the smell alone must have gotten people’s attention. Although I’m sure that a crazy prophet who had been eating bread baked over cow patties, and who’d spent the last year-and-a-half lying on his side in front of a miniature of Jerusalem, and who had just attempted to shave his head and beard with a sword, probably didn’t blend in too well to begin with.

If you want your message to have some punch and be memorable, this is one way to do it. God is getting Ezekiel to connect with all of Israel’s senses. It doesn’t say so directly, but I imagine this smell is meant to help Israel understand how their detestable practices smell to God.

In other places in Scripture the prayers of the saints are compared to sweet-smelling incense, but here the detestable idol worshipping of Israel is like the putrid smell of burning hair. Jesus says, “Whoever has ears let them hear.” It’s as if God is saying through Ezekiel, “Whoever has a nose, let them smell.”

Joshua Penfold (penfoldjoshua@gmail.com) senses something striking in the subversive, scandalous and sacred Scriptures.

Read more Tales from the Unending Story:
Matters of life and death
Like an adult on a spinning teacup
Living in the middle
Launched into oblivion
Sovereign of good and bad