‘Who will answer the call?’ 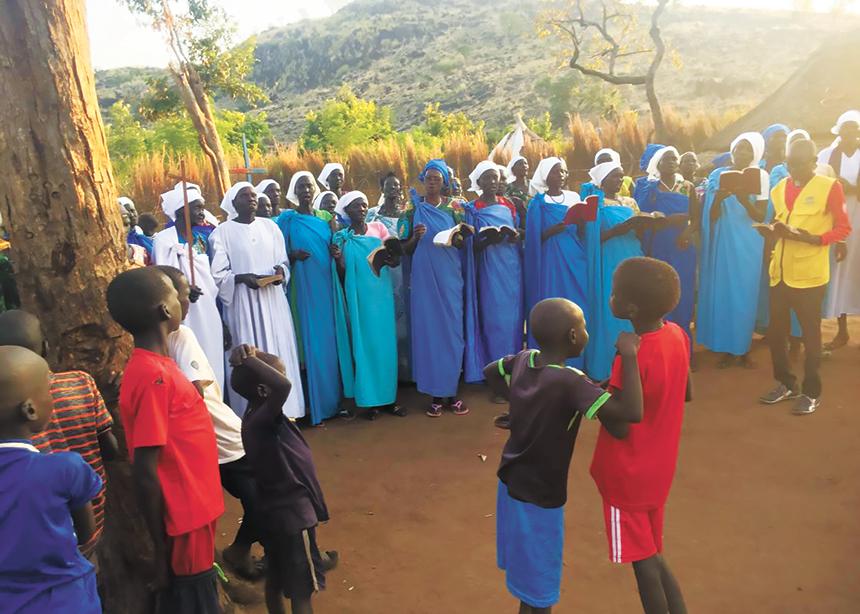 Leaders from Edmonton’s South Sudanese Mennonite Church are serving as connectors between refugees in Ethiopia and other Mennonites in Alberta.

In November 2018, people from the South Sudanese community, now living as refugees in Ethiopia, made an official request for help to their compatriots in Edmonton, who belong to Mennonite Church Alberta. They put a list together of all their needs, which included church repairs and roofs, Bibles, songbooks, and training and teaching for pastors.

Recently, the refugees in Ethiopia wondered if it was possible to get a hand pump so they could have clean drinking water. But, when asked, “If you could pick only one need to fill, what would it be?” they replied, “Discipleship training.”

Simon Hoth serves as the sole pastor for nine South Sudanese churches in Ethiopia. He explained, “The Mennonites brought us to Christ, so we see ourselves as Mennonites. Now we need to know how to live.”

The congregation in Edmonton has a 10-year history. In 2010, five South Sudanese families living in Edmonton were sitting at home every Sunday morning, not sure where they could worship and belong. Finally, after two years, the families got together and decided to approach MC Alberta for help. After researching different options, they felt Mennonites were the best fit for them, because the Mennonite church has a strong peace stance and cares about social justice.

“Where we come from, we need to live in peace. That’s what we want.” said Reuben Tut, the current pastor of the South Sudanese Mennonite Church in Edmonton.

He fled Sudan in 1995 during the second Sudanese war. His options were to join the rebels or leave, so he escaped to a refugee camp in Kenya. That civil war lasted 22 years and caused famine, disease and violence, along with more than two million deaths and the displacement of four million people. Although South Sudan gained its independence in 2011, war broke out again in 2013 and it continues today.

First Mennonite Church in Edmonton took the refugee families under its wing, including them in its church services for almost a year while helping them find a place to worship and supporting them while the group applied to be incorporated. Tim Wiebe-Neufeld, pastor of First Mennonite at the time, also offered them a series of classes on what it means to be a Mennonite, which was highly appreciated by the members.

Today the church has approximately 40 congregants. Its leadership team includes the pastor, an evangelist, a deacon, a secretary, a treasurer, a minister of children and a missions leader. Women also serve as deacons and wear blue dresses to signify their authority in the church. Every year the church sends a group of women to the MC Alberta women’s retreat.

Churches in Ethiopia were started by a Meserete Kristos Church (Mennonite) missionary named John Both, who has since died. Each of the nine churches has an evangelist who serves the congregation but receives no salary. According to William (Riek) Tut, a leader in Edmonton’s South Sudanese Mennonite congregation, “The evangelists must go to the forest to collect wood to chop and to find food for their families.”

In response to the request of South Sudanese Mennonites in Ethiopia, leaders of the church in Edmonton submitted a proposal to the MC Alberta Missions and Service Committee, suggesting that one person from MC Alberta should go to Gambela in 2020, to provide 10 days of discipleship training for 30 leaders on three main topics: discipleship, being Mennonite, and leadership training. The leaders also suggested that a member of the Sudanese church should be chosen to go along to assist with translation and cultural bridging. That request is now being considered by MC Alberta.

William Tut just returned from Gambela in January 2020. While there, he preached many times and told his people, “Mennonite churches are peace churches, so all of you need to be about peace. We hope our people will be able to come next year and teach you what it means to be a Mennonite.”

He also brought a message back from Hoth: “I am only one pastor. It’s too hard. We want to spread the Word of God in South Sudan and we can do it if you can partner with us. . . . We want to learn and grow.” 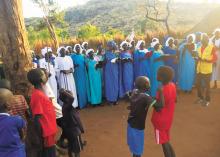 Pictured from left to right are the leaders from the South Sudanese Mennonite Church in Edmonton: Gatroup Mut, William Tut and Pastor Reuben Tut. (Photo by Joanne De Jong) 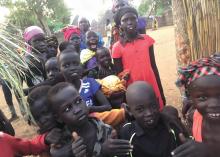 Mennonite children from South Sudanese refugee camps in Ethiopia smile for the camera after a church service. (Photo by William Tut) 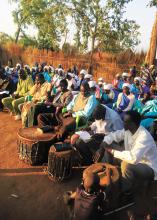