Who was Mary Magdalene?

A dedicated apostle in the very early church 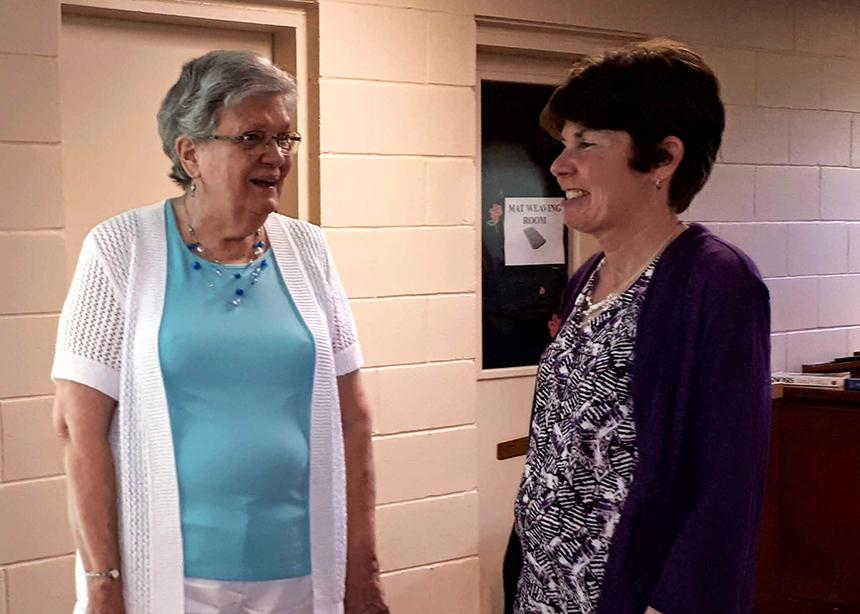 Organizer Martha Smith Good, left, chats with Amanda Witmer, instructor and lecturer who led a group of women in exploring biblical and Gnostic references to Mary Magdalene, at an event held at Wilmot Mennonite Church on July 22. (Photo by Janet Bauman)

Who was Mary of Magdala? What impressions do people have of her, and where do those impressions come from?

With these questions, Amanda Witmer, an instructor in religious studies at Conrad Grebel University College in Waterloo, Ont., opened her lecture, “Mary Magdalene: The dedicated apostle in the very early church.” Aptly held on July 22, the Feast Day of Mary Magdalene, the afternoon event, planned by Martha Smith Good and hosted at Wilmot Mennonite Church, was an opportunity for some 30 women to explore Mary Magdalene in her historical context.

First, it was important to clear up some misconceptions about her, said Witmer, noting that she is often confused with other Marys in the gospels. She is also associated with the so-called “sinful woman” who bathed Jesus’ feet with her tears and dried them with her hair, in Luke 7.

Witmer said that this association arose when Pope Gregory, in the sixth century, identified Mary Magdalene as the “sinful woman,” and described the seven demons Jesus cast out of her as the Seven Deadly Sins. Since then, she has been labelled a prostitute, even though there is no textual evidence for that in the gospels.

In providing context for Mary, Witmer said that she lived in a “highly politically charged context,” coming from Magdala, situated between the Roman city of Tiberias and Capernaum, where Jesus based his Galilean ministry. She was also caught in the tension between a conservative society that excluded women from the public realm, and the reality that some women became financially independent and supported various religious and civic movements.

Witmer also provided an introduction to Gnosticism, a movement that impacted early Christianity. It was based on the Platonic philosophy of radical dualism that separated the physical realm, assumed to be corrupt, inferior and evil, from the spiritual realm, considered to be ideal, good and perfect. Salvation meant release from the physical world by achieving a secret, mystical gnosis (knowledge) of Jesus and his teachings.

In 1945, many scrolls of Gnostic scripture were found in the hills in Egypt near Nag Hammadi, including the gospels of Thomas, Philip and Mary.

Witmer invited the women to explore in table groups the primary-source textual references to Mary of Magdala—first in the canonical gospels, and then in the Gnostic gospels—and make observations. There were lively conversations, especially about the less-familiar Gnostic texts with their references to Mary’s special relationship with Jesus and her leadership after his death.

What observations did they make?

Witmer said that Mary’s story was important enough to preserve in the early church, but later texts tried to subordinate her presence in the Jesus movement. “The Christian movement became more conservative and conventional over time, to avoid persecution,” Witmer said, and had a “tendency to limit women’s participation,” as a more hierarchical church structure took shape, as evidenced in First and Second Timothy.

Women left the lecture pondering how the church can make Mary’s story more credible once again. 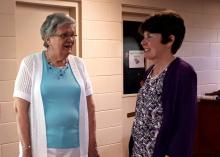 Organizer Martha Smith Good, left, chats with Amanda Witmer, instructor and lecturer who led a group of women in exploring biblical and Gnostic references to Mary Magdalene, at an event held at Wilmot Mennonite Church on July 22. (Photo by Janet Bauman)