Who goes canoeing with their mother-in-law? 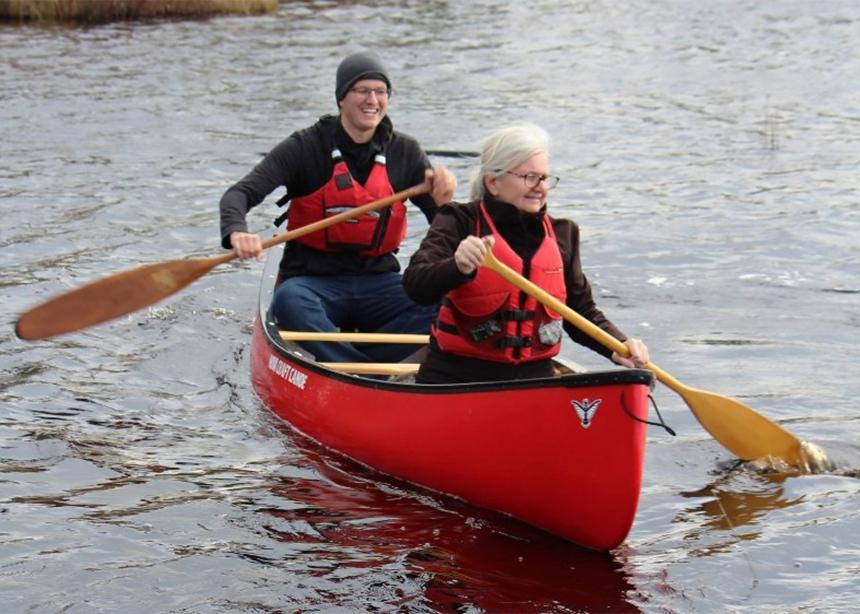 The adventurous canoe trip of Kyle Penner and Patti Enns is one of the 17 stories in the book. (Photo by Ashley Penner)

Kyle Penner’s December wasn’t filled with just Christmas preparations, but with a multitude of book launches. The associate pastor of Grace Mennonite Church in Steinbach, Man., released his first book, a compilation of tales of his outdoor adventures entitled Who Goes Canoeing With Their Mother-in-Law? The Misguided Tales of an Avid Paddler.

Last summer, he found himself continually telling people about his many canoeing expeditions in Manitoba and realized he should start documenting some of them. He ended up with a book containing 17 stories of canoeing, in which something unexpected usually happened or went wrong.

The book is illustrated by Patti Enns, Penner’s mother-in-law. But did they actually go canoeing together? Yes, indeed. When his wife and father-in-law refused to accompany him on a canoe trip, Penner was surprised when Enns offered to go. The experience that followed was unforgettable.

“There were four unmarked portages that we did not know we had to deal with, we were dragging up and down beaver dams, at least nine of them, we were in meandering boggy marsh with black flies and mosquitoes at our ankles,” he says. But they ended the day at a beautiful campsite on Francis Lake. “We watched the sunset together, just me and my mother-in-law.”

When Penner began writing the book, he realized that all good canoeing stories have maps and wondered out loud to Enns where he was going to find someone to draw them. She volunteered, and he loved the first one so much that he asked her to draw all 18 maps in the book.

Enns is a retired teacher who discovered her passion for drawing and painting when she was unexpectedly asked to teach an art class. She says she enjoyed seeing the maps take shape, mirroring the journey of the paddlers as she read through the book. “It really sparked my interest,” she says. “Now I have a journal and I draw every day.”

“Writing a book with my mother-in-law was great,” says Penner. “We play up the conflict between son-in-law and mother-in-law, but with us there actually is very little.”

He has been an avid paddler and outdoor enthusiast ever since working at summer camp and attending Canadian Mennonite University. When he and his wife got a canoe as a wedding gift, he took every opportunity to use it.

“When you’re canoeing, life slows down and you’re present to that which is in front of you, which is a gift in our busy, harrowed world,” he says. “It’s a place that fosters connection. . . . I’ve taken my kids canoeing and we’ve enjoyed those times of connection.”

He wanted to share these experiences mainly to tell a good story and make people laugh, but also in the hope that people might pick up a paddle and get outside.

Who Goes Canoeing With Their Mother-in-Law? is available for purchase and loan at CommonWord Bookstore and Resource Centre and for purchase in person at Mennonite Heritage Village in Steinbach, Man. 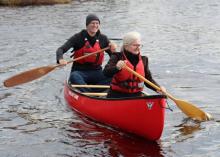 The adventurous canoe trip of Kyle Penner and Patti Enns is one of the 17 stories in the book. (Photo by Ashley Penner) 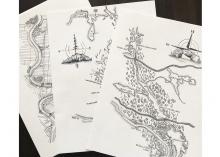 Who goes canoeing with their Mother-in-Law?