‘Who are we as the church now?’ 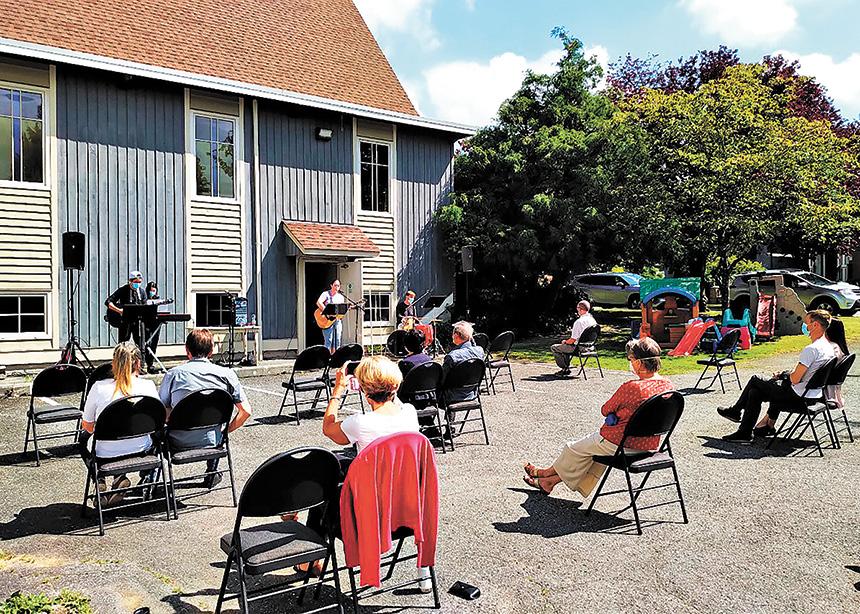 Following provincial protocols for meetings during the pandemic, members of Sherbrooke Mennonite Church in Vancouver gather for an outdoor service, in the summer of 2020. (Photo by Garry Janzen)

Justin Sun has never known pastoring other than during a pandemic. A year-and-a-half into his first pastorate, he says, “It’s been rough. How do I even do this job? I didn’t even attend a real in-person service until June.” That was nine months after he started in is job as a youth pastor in Richmond, B.C.

“It’s [been] two years now and we keep talking about ‘When we’re through this.’ This is what it is now,” says Marilyn Rudy-Froese, church leadership minister for Mennonite Church Eastern Canada. “We have to think that this is what the church will be like. Why are we waiting?”

The COVID-19 pandemic has impacted faith formation, congregational life, church finances, pastoral care, youth ministries and community outreach. It has raised questions like “Who are we as a church now?”

The leaders of MC Canada and the five regional churches interact regularly with many congregations. In interviews and emails shared with Canadian Mennonite they made observations on how congregations have responded over two years of the pandemic.

Adjusting and settling in

The first wave of COVID-19 hit Canada in March 2020, and provinces quickly initiated a variety of lockdown measures. Like the rest of the country, the approximately 200 congregations in MC Canada had to respond. Some quickly went online, using Zoom, livestreaming or pre-recorded services for Sunday worship.

But using these technologies has not been universal; rural churches and congregations where English is not the primary language seem to have developed less of an online practice. They also tend to be smaller. The pivot was easier for larger congregations that were more likely to have technologically skilled people handy.

Referring to specific examples, Tim Wiebe-Neufeld, executive minister of MC Alberta, says, “Both see getting together in person as the way to connect.” They might normally gather more frequently than urban congregations.

Some churches have still not met regularly.

Many churches relied on the recorded services sponsored by MC Canada during the summer of 2020. “We were all a little bewildered [at the beginning], but we have noticed an incredible resiliency among people,” says Doug Klassen, MC Canada’s executive minister.

Months of frequent adjusting to changing public health orders went by. When they could, some congregations met in person as soon as possible. Others were more cautious. Many churches have done a hybrid of online and in-person Sunday services, a practice that most expect to continue after the pandemic.

Online technology allowed people to reconnect with congregations across a distance, but across all congregations there were declines in the number of participants. Some barriers included the reliability of internet (sometimes a problem in rural regions) and data plans that were not large enough.

At first, seniors worried more about their vulnerability to the coronavirus. Later, families with children who could not be vaccinated were more hesitant. While programs outside the Sunday service declined in 2020, some of these returned in 2021, although often held online or in new forms. Church finances appeared to remain strong in 2020 because so much programming did not happen, and the donations remained robust. The executive ministers say that congregations have told them 2021 has been more financially difficult.

By now, two years in, a sort of long-suffering settling has become normal for many congregations and pastors.

Kevin Derksen, an MC Eastern Canada regional minister, says in an email: “When the omicron wave hit, I heard a lot of resignation from pastors: it wasn’t the crisis of 2020, because, for the most part, they knew how to manage the situation. But certainly [there is] a sense of low energy, capacity, inspiration.”

At the beginning of the pandemic, “There was a real focus on Sunday morning” says Wiebe-Neufeld.

Derksen echoes that. “Huge amounts of energy have been spent in this pandemic figuring out how to do worship,” he says. “But in many cases, there’s not much energy or capacity left for other parts of congregational life and ministry.”

This led to other concerns according to several church leaders.

“COVID-19 has highlighted the energy we put into Sunday services. But is that all we are? So, it raises questions about identity and purpose,” says Rudy-Froese.

The extensive focus on Sunday mornings, especially in congregations where the pastor remained responsible for operating the technology, meant that less time and attention could be given to other ministries. Children’s and youth ministries have been hardest hit during the past two years, along with community outreach.

Garry Janzen, MC B.C.’s executive minister, says, “I am impressed by the hard work to make life interesting for youth, but they really struggled.” He thinks that youth pastors probably had high fatigue levels because it has been hard to develop regular creative alternatives to in-person events.

Keeping youth engaged online is difficult because so many are not part of Sunday services, and because other youth programs are also not happening. Several church leaders say it is unclear if those families are engaged or will return to church activities.

Rudy-Froese reports, however, that one church said its youth-group numbers have never been higher—because other churches in their community were not doing any youth programming.

Pastoral care has been difficult, too. “Pastors felt disconnected from their people,” says Rudy-Froese. Hospital visits and other in-person practices were also constrained. And pastors also found themselves navigating ever-changing pandemic guidelines and different risk tolerances among congregants.

Sun says that this required constant second-guessing: “Should I or should I not do this?” He serves as youth pastor for both Peace Mennonite and Peace Chinese Mennonite in Richmond B.C. Adding more complications is that the two congregations have slightly different approaches to pandemic guidelines. “It’s a bit different messaging from each church,” he says.

Eventually “the infrastructure for online services stabilized, even for the smaller congregations, so now pastors can attend to other things like congregational care,” says Michael Pahl, MC Manitoba’s executive minister. The extra effort is especially crucial for trying to reconnect with congregants who used to be involved but now don’t seem to be participating in online worship. “There is a percentage that had been involved and don’t seem to be present,” he says. “And you just don’t know where they are at.”

It is already known that pastors have some of the highest chronic-stress levels of all occupation types, but the pandemic added more stress to their work. Stephen Reist, an MC Eastern Canada regional minister, writes in an email: “One contributor to pastor fatigue might be having been put in a position to discern and speak and lead in the midst of such widespread uncertainty and anxiety at every level of our lives.”

Overall, pastors have had extra tasks made more complex because of public-health orders, technology and a lack of clarity about recommended practices. They expend emotional energy responding to the heightened distress of congregants.

Constant worry about the safety of their congregations was also a burden. Josh Wallace, who serves as interim executive minister for MC Saskatchewan, explains the demands on pastors with the constant adjustment to health rules: “There’s the extra decision fatigue: ‘Is this safe for me to do? Is it safe for the person I’m visiting to do?’ ”

Most respondents thought that mental health will be a more significant part of post-pandemic congregational life than it was pre-pandemic. There may be pent-up aspects that surface later.

Klassen notes a potential problem arising from the smaller attendance for events like funerals. “I think there will be pretty significant arrested grief,” he predicts. “There were no big gatherings to remember people, and no potlucks.”

Wallace also suggests that even youth “are carrying extra worry and trauma. There’s climate change and other things. The pandemic has forefronted some of this.”

Who will we be after this?

Based on what they have heard during interaction with pastors, each of the church leaders mentions the question of how the pandemic will shape the church. Wiebe-Neufeld says, “At first it felt like a waiting process, but now, we can’t just wait. So how do we be church this way?”

Noting the extensive energy devoted to maintaining Sunday services, Derksen says: “At the very least, I think the experience [of moving online] has shown many congregations that their identity and purpose is not/cannot be housed in the people who show up for worship on a Sunday morning. This may be a gift, as we are reminded that the purpose of the church never was contained in the people who show up on a Sunday morning.”

Still, pastors are less certain about who is participating in congregational life now. “The move online has opened doors for some and distanced others,” says Rudy-Froese.

Wallace echoes others in thinking that volunteer and pastor fatigue, the decline in youth programs, and former congregants who no longer participate online, may leave “a scar we wear for a long time.” The pandemic has amplified trends in church closings and people leaving churches, phenomena that may have existed before the pandemic but are more noticeable now and will affect the church in coming years.

Lastly, all church leaders expect online and hybrid worship to continue, especially for church meetings. Several wonder about the implications of some participants being physically afar. It is possible that connecting online might lead to even further detaching a congregation from its geographical location and neighbourhood. Online services have the potential to be more inclusive, but they can also be exclusive, Wiebe-Neufeld observes.

Pahl hopes that congregations will put careful thought into the new practices that came about because of an emergency pivot and ongoing adjustment, so as to “strengthen who you are as a church and [not] diminish it.”

Getting specific, Wallace hopes that “we have grown in our awareness of vulnerabilities in our midst.” For example, a possible long-term cultural shift would be to protect others by masking when a person has a cold, or even staying home.

“We’ve developed habits and patterns over these two years,” says Rudy-Froese. They should be carefully examined.

Randolph Haluza-DeLay is a regular Canadian Mennonite columnist and a former sociology professor.

1. What adjustments have your pastor, church staff and congregation made during the COVID-19 pandemic? What things do you anticipate will change in the coming year?

2. Randolph Haluza-DeLay writes, “Many churches have done a hybrid of online and in-person Sunday services, a practice that most expect to continue after the pandemic.” What are the advantages and disadvantages of having worship available both online and in person? What are the privacy and copyright challenges with online worship?

3. The concentration on Sunday morning worship has resulted in less energy for children’s and youth ministries, say pastors. Is that true for your congregation? What are the things you worry about for the future of the church?

4. How do you think the pandemic will change the church? What are some potential positive outcomes from this major upheaval that has now lasted two years? 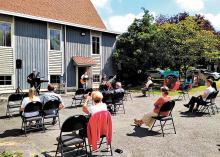 Following provincial protocols for meetings during the pandemic, members of Sherbrooke Mennonite Church in Vancouver gather for an outdoor service, in the summer of 2020. (Photo by Garry Janzen) 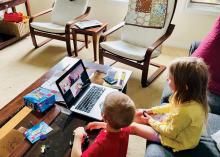 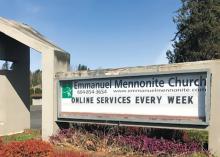