Where do we go from here?

A follow-up to Special Assembly 2017 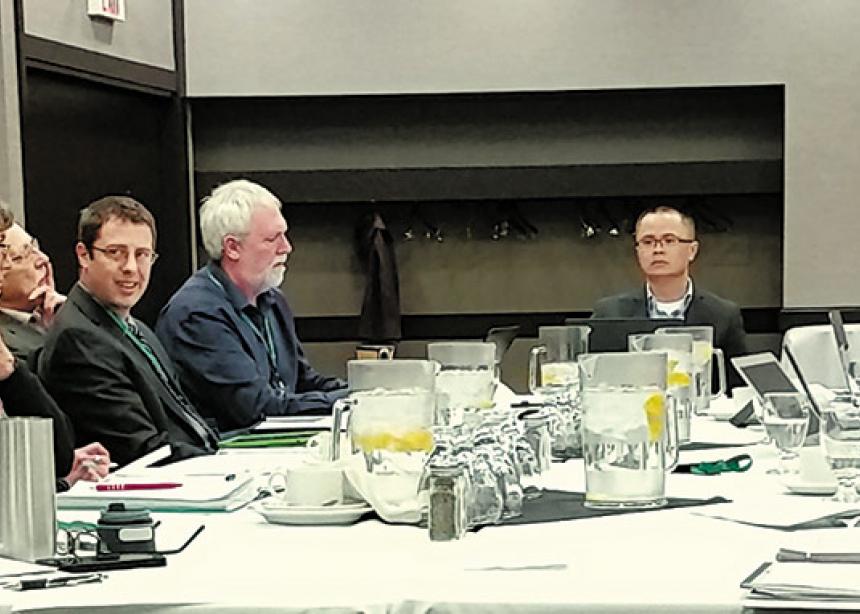 On Oct. 14, 2017, delegates at a special assembly in Winnipeg approved a restructuring plan to shift the centre of ministries from the nationwide church office to each of the five regional churches. A 94 percent vote gave a clear mandate for change, but how clear is the way forward for a new Mennonite Church Canada? (See more at “Overwhelming vote in favour of new MC Canada structure.”)

The General Board and its commissions have been replaced by a Joint Council, made up of a nationwide executive, and a moderator and representative from each regional church, to jointly determine nationwide priorities and oversee MC Canada ministries. An executive staff group, consisting of the MC Canada executive minister and the five regional executive ministers will coordinate the work of the nationwide body and regional churches. It will act in an advisory role to the Joint Council. A significant change is that delegates to MC Canada business sessions will now be sent from the regional church body instead of from individual congregations.

An immediate and painful effect of restructuring was the dismissal of eight MC Canada staff. Willard Metzger, MC Canada’s executive minister, met with each staff person to discuss employment changes. Employees having served at least four years were given one month of severance pay for each year of work, to a maximum of 13 months.

Another staffing concern is the fate of Witness workers. Metzger says the General Board, before its dissolution, had decided that Witness worker terms would be fully funded until the end of June 2018, at which time they will return to North America. Terms may continue, depending on the reorganization of support and funding. “[We are] transitioning toward some form of relational funding,” Metzger says, noting that congregations and regional churches are encouraged to consider expanding or developing direct partnerships with workers. (Read more at “All International Witness workers being recalled next June.”)

Communication and budgeting are certainly top of mind for regional executive ministers and executive directors.

Asked what is the first thing for MC British Columbia’s restructuring, Garry Janzen replies, “Communication—making sure people are on board with understanding, especially in donations and finance.”

With the dissolution of MC Canada’s Engagement Council, fundraising responsibility falls directly on each regional church, but regional church minister Ryan Siemens says, “Saskatchewan has never done this in the past—directly appealing to donors. An effort is being made to communicate what is being supported: China, Indigenous relations, the general budget. . . . Our relationship [to these ministries] is now built through the regional office.”

Ken Warkentin, MC Manitoba’s executive director, says, “The first thing is simply coming to a clearer understanding of the financial implications,” while regional minister Tim Wiebe-Neufeld says that Alberta’s first priority is “communication with congregations about what [restructuring] means, particularly with donations. MC Alberta is now the conduit through which everything happens.”

Budgeting work is moving ahead, though. “We are still working on the fiscal year that ends Jan. 31,” Metzger says, adding that discussions for the new budget, which begins Feb. 1, 2018, are ongoing. (See “Is it a financial plan or a budget?”)

MC B.C. remains uncertain about whether congregations unhappy with the “Being a Faithful Church” process on same-sex relations will remain with the regional church. This uncertainty makes budgeting and programming difficult to predict. “[We will] keep working at it and building healthy connections, and see where that takes us,” Janzen says. While there is uncertainty, he is hopeful for a simplified reality that puts “conversation partners closer to home . . . [and] the fullness of the church will come home in a whole new way.”

Alberta, the smallest regional church, has no physical office and a widely scattered part-time staff. The July 2017 death of moderator Dan Jack has presented extra challenges. “One of the questions is about our capacity. . . . Do we have both the money and the people to provide the needed structure?” Wiebe-Neufeld wonders. On the positive side, he says, “If we are able to flesh out this structure, it will be good for us to have some local sense of presence in the larger church.”

In 2017, Saskatchewan has had its own visioning process called “Refresh, refocus, renew.” Siemens sees the nationwide restructuring as a good connection to this process, and he hopes for an increased engagement for those with limited participation in the past. “I am a strong believer in our polity. We make it happen,” he says.

Because MC Manitoba shares office space in Winnipeg with MC Canada, the emptiness of the building now is striking. “Just by proximity, we feel the weight of the layoffs more heavily,” says Warkentin. “Most of the employees are members of our congregations.” Pain is present, but so is hope. “The missional drive that is beginning to kindle the imagination of congregations will be served well in this new model,” he says.

MC Eastern Canada is the largest regional church, and executive minister David Martin writes in an email: “MC Eastern Canada is also interested in connecting congregations to the larger MC Canada family. By raising the profile of MC Canada within MC Eastern Canada congregations, it is our hope that we will develop a more robust identity as a nationwide Mennonite family of faith, collaborating together as regions around a common mission and purpose.” He looks forward to the new structure encouraging regions to work together, share resources and to “follow God’s invitation to be agents of Christ’s healing and hope in our world.”

While “what next” is clearly a work in progress, leaders of the regional churches are hopeful that the new structure can help congregations engage and thrive in the larger church by more closely connecting people with its mission and work. In this process, Metzger appeals for “some grace and patience as bumps and gaps are attended to. There is enthusiasm across our constituency,” he says.