‘And that’s when it happened!’ 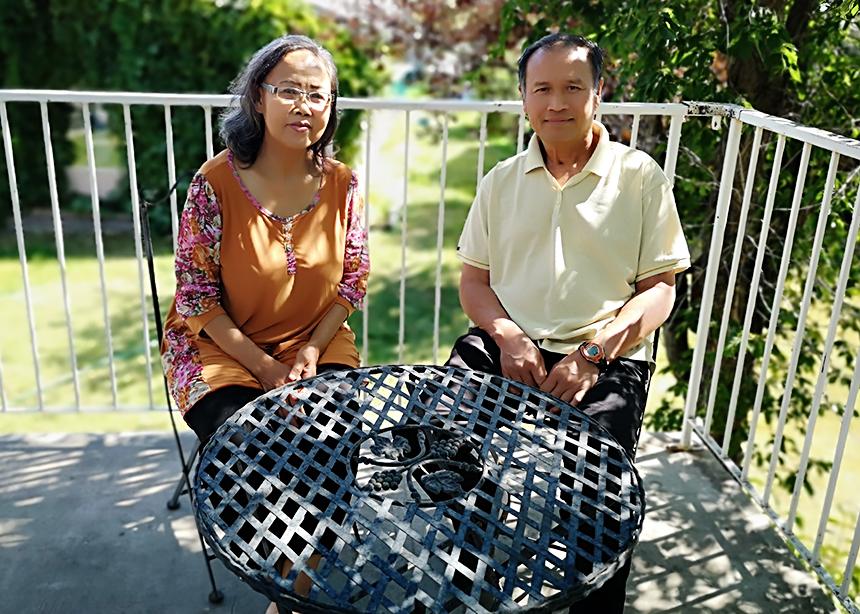 Paul and Vila Phomsouvanh are pictured at their home in late August. (Photo by Will Loewen)

I was caught off guard when I got the call that my friend Paul Phomsouvanh was in the hospital with COVID-19 last fall. At that time, the new more contagious Delta variant had recently arrived. Cases were on the increase, so I shouldn’t have been surprised.

I had seen Paul bounce back quickly from serious workplace injuries in the past, so he didn’t seem to be more susceptible than anyone else. I would also find out later that Paul was a heavy smoker as a younger man, and people with weakened lungs were especially vulnerable to the virus.

But mostly, I was surprised because, to that point, our work as a congregation was more about responding to the lockdown than to the coronavirus.

When I asked how serious it was, I was only told that Paul had driven himself to the South Health Campus in Calgary on Nov. 10, unsure if what he was feeling was, in fact, COVID-19. The hospital quickly decided it was, and that he should be admitted.

It didn’t sound very serious, but I knew from the news that hospital beds were in short supply, so the hospital’s admitting him was a recognition that he needed more than he could administer to himself at home. I also knew that hospital rules at that time meant that I couldn’t visit him, so I said that I would pray for him. I sent out the news to the whole congregation, inviting everyone to pray for him.

We waited for the updates, expecting that he would get the regular mix of medications and treatments, and that he would be returned to us in a week, but that update didn’t come. Instead, we heard that he wasn’t responding to the treatments the way medical staff hoped, so they were trying new and different antibiotics. The longer he stayed, the more the reality set in that this was quite serious, and that Paul’s future was in doubt.

What we didn’t hear would have unsettled us even more. When Paul was admitted, he quickly texted his wife to say that he needed to stay at the hospital. He said he loved her and asked her to pray for him. Within hours, he was in an induced coma with a mechanical respirator set up to cover for his failing lungs, and various new medications flowing through his veins. He was given medication to fight the infections in his body that resulted from the COVID-19 infection. Those antibiotics succeeded at fighting off one infection, but when a new one came, Paul’s body became resistant to the old antibiotic, and this became a repeating pattern.

At first, only his wife Vila was able to visit him. She would try talking to him, praying over him and reading scripture for him. When I and others were finally able to visit him, we would cover ourselves in protective gear, and we would also talk, pray and read scripture.

Paul had spent some time as a deacon in our congregation. He was a leader among the local Laotian-Thai Christian community. He had also recently started giving leadership to an online Laotian Bible study that had people joining from around the world. He had spent time in Canada, Thailand and Laos preaching the gospel, mentoring leaders and supporting churches. On top of that, he gave support to a long list of neighbours, business partners and friends. So, it wasn’t a stretch to say that people were praying for Paul all over the city and all around the world.

That pattern of medicine working, failing and then being replaced by something new repeated until the hospital ran out of antibiotics to administer. The doctors called his wife in for a conversation. As the pastor, I was invited to join as well.

One doctor explained that they were out of options. Not only had they run out of ways to fight off infections, but the ventilator was doing all the breathing for him. Paul had been in the hospital for almost a month and had made almost no progress.

His lungs were no longer infected, but they had started to harden from not being used. The best-case scenario was that, even if he managed to avoid further infections, he would never breathe again without the help of a machine. Was this the quality of life we wanted for Paul? Vila responded by saying that she understood the bad news, but she still felt that she was not ready to interrupt his care.

A second doctor explained that he knew that Paul and Vila were people of profound faith. He explained that he was a Christian too. He had done missions and charity work in different parts of the world, and he had seen God’s miraculous power at work. So, he invited us to join him, stand around Paul’s hospital bed, and pray for a miracle.

He said we needed to pray hard, push every doubt from our minds and implore God to intervene. So, we did. I don’t know about everyone else, but I had doubts, many of them. But I pushed them aside and trusted that God could provide a miracle.

A week went by. There was no progress, and so we were called in for another difficult conversation. There were no new infections, but one was inevitable. There was no medical reason for hope, so the doctors argued it would be better for them to remove support with his loved ones in the room rather than for him to slip away alone in the night.

The same doctor who prayed with us explained that the doctors and nurses around him drew encouragement and hope from watching people recover, and since it seemed no miracle was coming, maybe it was time to give Paul’s ICU bed to someone whose chance of survival was better. Still, Vila prayerfully decided that it didn’t feel to her that this was God’s timing.

Throughout all of this, people were praying. When possible, local friends and family would drop in to visit. Others joined by internet video calls. After another week, there were still no changes, good or bad, so it was decided that Paul could be moved to another wing of the hospital to wait out the inevitable.

And that’s when it happened! On Dec. 20, with only basic care, Paul’s body started to respond. His heart rate increased, and his lungs started working. Very slowly at first, so slowly that everyone was cautious not to read too much into it, but he was improving. After a week, he was moved to a physiotherapy/rehab centre, and came home after a three-week stay there.

Paul was in a coma for 40 days and nights. The last thing he remembered was being admitted to the hospital, and then nothing until he heard a voice from God. The voice said, “Paul, I need you to build my church. I need you to bring my message to the Lao people.” Then, Paul opened his eyes. It would be a week before his throat was strong enough to speak. It would be a month before his muscles could be rehabilitated, and he could walk on his own. But Paul was back.

He said he didn’t remember the visits, the readings, the stories and the prayers, but he knew that he had received a miracle. He only has gratitude for the doctors and nurses who cared for him. He was humbled by the support of the church, locally and globally, who prayed for him. Already, he is taking every chance he gets to tell people his story, and when he gets his strength fully back, the work will continue.

When Paul fell ill, we all prayed. We prayed, of course, that a husband would be restored to his wife. We prayed for our friend, neighbour, teacher and business partner to be restored to us. But right alongside those personal prayers, we asked that whatever happened, that the work he started, the work that he and Vila were so passionate about, would continue. All of this is an answer to prayer.

Paul and Vila also asked to share that they are grateful for the prayer and well-wishes he has received from supporters at Trinity Mennonite Church, Mennonite Church Alberta, and MC Canada Witness 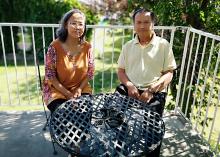 Paul and Vila Phomsouvanh are pictured at their home in late August. (Photo by Will Loewen)