When the church listens 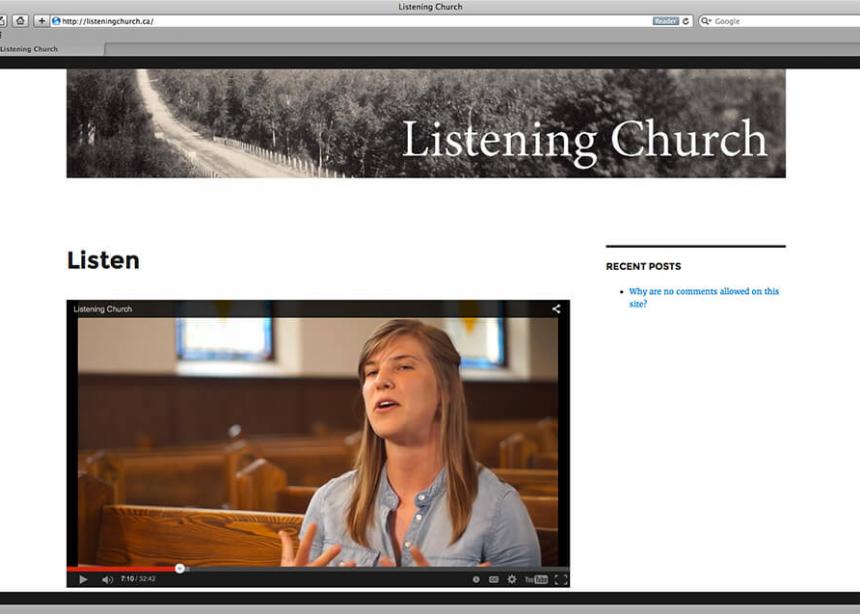 Listening Church, which weaves together interviews with 22 LGBTQ people from across the geographic and age spectrum, was produced at the request of MC Canada leadership and was financed by $5,000 from an anonymous donor. Canadian Mennonite University (CMU) freed professor Irma Fast Dueck to work on the project and MC Manitoba contributed some of Darryl Neustaedter Barg’s time.

Setting the tone for the film, Gini Bechtel sits comfortably in a church pew and says softly and confidently, “The level of acceptance I’ve felt [in church] has exceeded my expectations.”

Similarly, Craig Friesen says his experience in the Mennonite church has been “very positive, very welcoming,” and John Rempel, who retired last year as director of the Toronto Mennonite Theological Centre in Toronto, says, “I was a recipient only of kindness.”

While those in the film speak also of difficult times, the tone is decidedly positive. This surprised co-producer Fast Dueck, who has heard from many LGBTQ students at CMU of their struggles in church. She says of her conversations with people in the film: “It gave me a hope for the church I hadn’t had for a long time.”

She notes that the tone would have been different had they included LGBTQ people who had left the church. The people in the film are those who have found a place of belonging, although often only after intense struggle.

“I prayed for a number of years that God would make me straight,” says Mark Brubacher, “but it didn’t happen.”

The film is marked by a tenderness that comes when people who care about the faith community share in a deeply personal way. The film comes across not as a theological argument or ethical affront, but rather as people simply telling their varied stories of church involvement.

In that telling, some of the underlying hurt surfaces. In reference to letters in this magazine, Maggie Perquin says, “We repeatedly get Bible passages put in front of us that say why we shouldn’t be here or why we’re dragging the church down.”

“Reading those letters to the editor is incredibly difficult,” echoes Sharon Campbell. “I feel like people forget they are talking about people.”

Indicative of both the hurt and the hope is the story of Clare Schellenberg, a 2015 CMU grad. “Since I was young, the church has been the place that has shaped who I am,” she says sitting in a hard wooden pew. But when she came out five years ago, what she knew of the church was “completely shaken and stripped.” Church “suddenly became a place that held a lot of fear.” She felt for a time that it taught her that God didn’t love her any more.

“As much as coming out to friends and family was very difficult,” she says, “it has by far the church that has been the hardest and has hurt me the most.” Yet she has stayed, saying, “I do think that if Jesus was here today . . . I would be invited to the table to eat with him.”

While Listening Church is obviously related in content to the Being a Faithful Church (BFC) process, the producers have minimized the link. Fast Dueck says some interviewees feel let down by the BFC process and didn’t want this film to stand as their implied affirmation of it.

“I’ve lost patience with the discernment process the church is going through,” says Perquin in the film. “It just seems like it’s endless.”

According to Fast Dueck, some interviewees feel a project like this should have come at the outset of the BFC process, not at the end.

She says that she and Neustaedter Barg have thought about a follow-up event that would provide church leaders the chance to hear from people, both in and out of the church, who have been hurt as a result of church attitudes and actions toward LGBTQ people. She said the aim would not be discernment or coming up with recommendations, but simply the spiritual process of reconciliation.

The film, which can be watched online at listeningchurch.ca, is receiving considerable attention.