‘Whatever happened to simple living?’ - Part 1 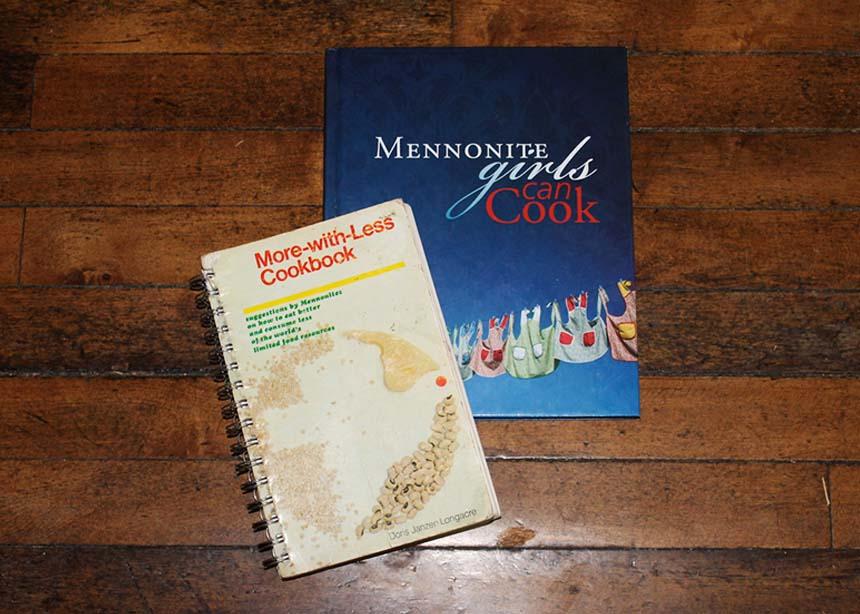 The More-with-Less Cookbook and Mennonite Girls Can Cook have both been popular. (Photo by Will Braun)

Going right back to Menno himself, Mennonites have valued simplicity. But to what extent has this ethos survived the age of gadget-saturation, relentless advertising and soul-numbing consumption?

It feels odd to even use the term “simple living” now. It feels outdated and unsophisticated at a time when doing right is often intertwined with constant refinement and reinvention of terminology.

Still, material modesty is deeply rooted in our faith tradition. Jesus was clear about the lilies of the field and the “least of these.” Early Anabaptists took heed. The material trappings of the Roman Catholic church were rejected. Sharing with others was emphasized over personal accumulation.

Menno Simons wrote: “We are prepared with all our hearts to share our possessions, gold, and all that we have, however little it may be; to sweat and labour to meet the needs of the poor, as the Spirit and Word of the Lord and true brotherly love teach and imply.”

Those words are quoted in the preface to the More-with-Less Cookbook, a more recent landmark in Anabaptist simplicity. Written by Doris Janzen Longacre and commissioned by Mennonite Central Committee (MCC), the 1976 cookbook is the best-selling Mennonite book ever. The tagline on the cover reads: “Suggestions by Mennonites on how to eat better and consume less of the world’s resources.”

It was part of MCC’s call for “each constituent household” in North America “to look at its lifestyle,” as explained in the preface. “Noting the relationship between North American overconsumption and world need, a goal has been set to eat and spend 10 percent less.” The cookbook is a guide to attaining this goal, tapping into Euro-Mennonite sensibilities around practicality, resourcefulness and thrift.

These sensibilities are codified in our Confession of Faith. Article 21, entitled “Christian Stewardship,” reads: “As stewards of money and possessions, we are to live simply. . . . We cannot be true servants of God and let our lives be ruled by desire for wealth.”

The Confession clarifies: “Our tradition of simple living is rooted not in frugality for its own sake, but in dependence on God . . .”

It does not clarify that the distortion of simplicity can be a soul-stifling, justice-ignoring obsession with deals. In my experience, this shadow side of simplicity is as easy to detect among Mennonites as the more virtuous side.

By “simple living” I mean consuming less than the norm—choosing to buy less than you could out of concern for the earth and others. It may or may not be combined with organized movements to change government policies and corporate actions. It is, by definition, the realm of the privileged, or at least those with the potential to have more than enough.

Views on simple living are as diverse as the Mennonite community itself. Joon Park of Emmanuel Mennonite Church in Abbotsford, B.C., says that in his experience, simple living has received less emphasis in ethnic communities than Mennonite values like peace, community-centered life or radical discipleship. While Park’s country of origin, Korea, is relatively wealthy (ranking higher on the United Nations Human Development Index than France or Italy), many Mennonites come to Canada from less prosperous countries and they come in part because they want greater security and safety. Many want to have more than they had back home. This may be symbolized, Park says, as “being diligent, independent, and materially blessed, following the footsteps of the settlers’ spirituality-comfort and enjoyment.”

Park says, within Korean Christianity, simple living is not something that would be spoken of or considered attractive.

He emphasizes that “each person from each specific region of the world brings in a different set of values.” His guess is that many or most of these people have been influenced by “western evangelical missionaries or itinerant preachers” such as Billy Graham. These expressions of faith lean much more toward prosperity than simplicity.

Faith in a land of plenty

That propensity has arguably taken hold among a great many Mennonites in Canada as well. While we may not hear about it from the pulpit, by any global measure, our churches are almost all prosperous. Some extremely prosperous.

I see a shift away from simplicity as illustrated in the marked difference between the More-with-Less Cookbook and Mennonite Girls Can Cook, which first came out in 2011. One talks about global food needs, the other talks about comfort foods. One provides many windows into the Global South, the other shows page after page of magazine-perfect, fully first-world delights (all of which I would love to try). One involves a lot more dry beans than the other, as my neighbour pointed out.

I borrowed her near-pristine copy of Mennonite Girls Can Cook. She is a highly experienced Mennonite cook and gardener. She says Mennonite Girls Can Cook is not “practical” enough for her. Flipping through it as we chat, she glances randomly at the list of ingredients for Stuffed Pork Loin, asking, rhetorically, “Do I have frozen orange juice concentrate in my fridge? Am I going to go to town to get some?” Still, with genuine admiration, she describes the book as “lovely.”

According to Menno Media, which publishes both cookbooks, More-with-Less has sold “700,000–800,000 copies” over 45 years (all editions combined) while Mennonite Girls Can Cook has sold “in the range of 50,000 copies lifetime,” with the “Celebrations” edition selling a bit less than half of that. More-with-Less sales data for recent years was not provided.

Averaged over their lifetimes, More-with-Less has over twice the annual sales. Of course, we cannot conclude much more from this than that both are popular. I would suggest that they also aptly demonstrate two competing emphases.

For the second part of this series, I talk to Kenton Lobe, who teaches a course in simple living, and a group of women from Steinbach, Man., who undertook their own informal simple-living project. Look for Part II online on Wednesday, Oct. 6. 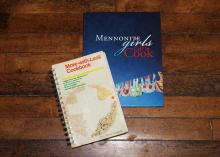 The More-with-Less Cookbook and Mennonite Girls Can Cook have both been popular. (Photo by Will Braun)