What is Mennonite identity and why does it matter? 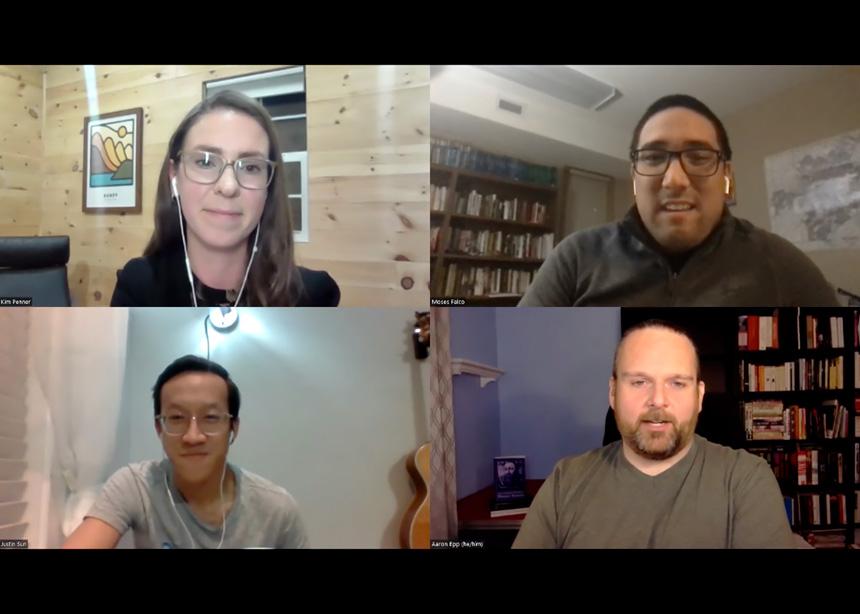 “Why are you a Mennonite?”

That’s the question panellists were asked at the third instalment of Canadian Mennonite’s online discussion series. People on 47 different screens tuned into the Nov. 16 conversation, engaging in a lively back-and-forth with the speakers.

Hosted by CM’s Aaron Epp, the event featured three pastors—Justin Sun, Kim Penner and Moses Falco—who explored what it means to be Mennonite and why this faith and community are relevant today. The panellists came to the dialogue with perspectives from different locations, genders, races and Mennonite backgrounds.

Moses Falco grew up in the Baptist church tradition in Toronto, and joined the Mennonite church as an adult, when he married into it. Now he is pastor of Sterling Mennonite Fellowship in Winnipeg. Three core Mennonite beliefs attracted him are: the centrality of Jesus, the dedication to community and the importance of pacifism. When he first joined the Mennonite church, he was amazed by how genuinely people cared about these values and how welcome he felt, despite having no cultural connections.

Kim Penner was born and raised in the Mennonite church, as the daughter of a pastor. Her experiences in the Mennonite church have disappointed her but have also left her hopeful. It is her family’s story that has shaped her—fleeing persecution, singing, working for peace—specifically the trailblazing women in her family. She is pastor of Stirling Avenue Mennonite Church in Kitchener, Ont., and an academic who writes and teaches on power and sexuality.

Justin Sun pastors Peace Mennonite Church and Peace Chinese Mennonite Church, both in Richmond, B.C., although it wasn’t that long ago that he didn’t really know what a Mennonite was. He grew up in the Chinese Alliance Church and jokes that he became a Mennonite by accident when he studied and lived amid them at Columbia Bible College. “I think you know the values and theologies of a faith tradition by its fruit, the people it seems to crank out, and there are some pretty cool folks that I continue to get together with across Mennonite circles,” he said.

But identifying as Mennonite can mean so many different things sociologically, politically and theologically.

“In a time where ‘Mennonite’ is a word that can be defined and claimed broadly, what unites us, what divides us, and why?” Sun asked.

A viewer offered their insight: “I've come to think about Mennonites as more united by our common questions than common answers, where my church is the community I commit to pursue those questions with.”

“Identifying ourselves around the questions we ask opens us up to diversity and doubt, and seeing our connection even though we might not end up with the same answers,” Falco said, musing that Mennonites have traditionally liked to live in the grey areas.

Penner agreed about the importance of questions, which, she said, “reveal our openness to learning and to the mystery of the Spirit and God's ongoing revelation.” She also observed: “Sometimes only asking questions leads to a grey that is actually not a question, but an answer. The lack of decision is a decision. It's a decision not to say something, and that has implications for people.”

There is beauty in trying to hold unity in tension with difference. But Penner sometimes wishes the Mennonite church and its people could agree on more, like definitions of peace, violence, justice and love. “I wish we would start by affirming each person's humanity, understanding that humanity includes our sexual diversity, racial diversity, cultural diversity, gender diversity, diversity in every way, and that we don't make identity the moral issue,” she said.

Being Mennonite shouldn’t be a static identity confined rigidly to one confession of faith or amendment, Sun said, because that wasn’t the spirit of the early Anabaptists. “It was a constant spirit of growth, development and evolution, asking deep questions about who we are and having that awareness and radical reformation,” he said. “In a way, what we're doing today is part of that.”

CM’s online discussion series explores current events that are impacting the church and wider world. It launched on May 25 with a conversation about the climate crisis and followed that up with a discussion on Indigenous-settler relations. The magazine plans to host more events in 2023.

“Online panel discussions are part of CM’s mission to foster dialogue on issues facing Mennonites in Canada,” says publisher Tobi Thiessen. “By discussing difficult topics as a community, we hope the events model healthy dialogue. . . . We also hope the audience will get practical ideas on how to respond to issues in their own contexts.” 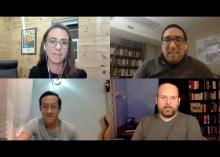