‘This is what God calls us to do’ 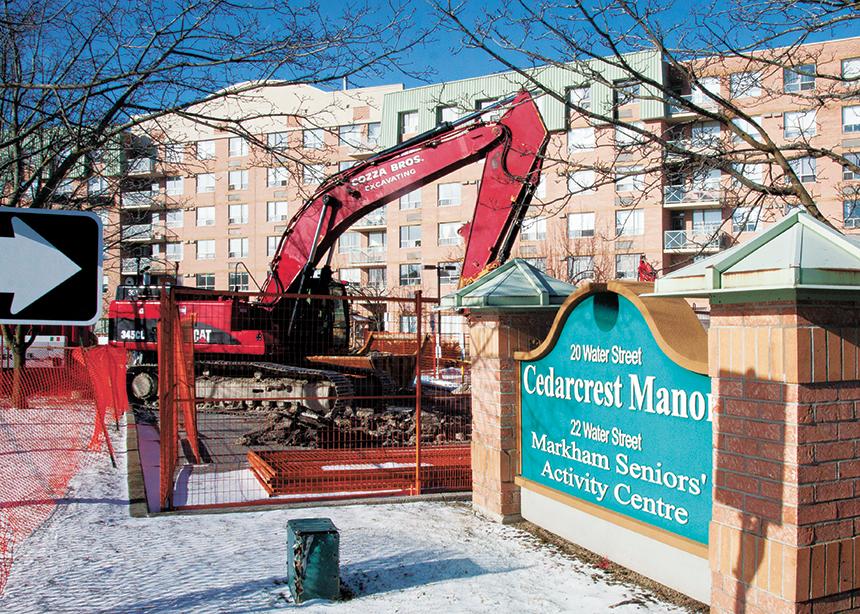 A crane breaks ground on the former parking lot at Cedarcrest Manor in Markham, Ont. The new building will have 32 units for low-income and disabled tenants. (Photo by Myron Nicholson)

A group of churches in Markham is ready to break ground on its latest affordable housing project.

Markham Inter-Church Committee for Affordable Housing (MICAH) is a group of 13 founding-member churches in the Markham area, including Hagerman Mennonite, Rouge Valley Mennonite and Wideman Mennonite. Since 1988, the committee has provided an estimated 5,000 homes in Markham, a city in the Greater Toronto Area.

Its latest project will provide 32 new units for seniors and at-risk children and youth.

“Markham is a rather affluent community,” says MICAH president Mike Clare, noting that rents in the area are much higher than the Canadian average. Because of this, people with low incomes and vulnerable populations like seniors and children have difficulty finding appropriate housing, he says.

In the late 1980s, a group of churches in the area banded together and decided to respond. While each church was passionate about creating housing, “the churches realized that if the building project failed, they would be responsible for the shortfalls,” he says. To avoid this, MICAH was incorporated to shoulder the legal responsibility.

The Committee’s first project, Cedarwood Manor, was completed in 1991. The building houses 150 units for seniors, with 80 percent of the rental units subsidized to a percentage of the tenant’s income. The group has since built two other projects in the area.

While the original building is still going strong, demand continues to grow.

“In order to get into a Cedarcrest Manor apartment, there’s a 10-year waitlist,” Clare says. “For every [successful] application there are 2,400 others.”

MICAH was looking to do another building project. “We tried a couple of ideas with the City of Markham, and they didn’t quite take off,” he says.

In December 2015, York Region requested shovel-ready proposals. The Committee knew that, with high land prices in the Toronto region, the only way it could put a proposal forward would be if it had land donated.

That was when MICAH realized some untapped potential at Cedarcrest Manor. Because many of the building’s residents no longer drive, much of its parking lot was not being used.

“There was a chunk of land that we didn’t have to buy,” says Clare. “We jumped at the opportunity.”

The new building will offer 32 units and is expected to be five storeys high. Twenty-five units will be standard one-bedroom apartments for seniors; five will be barrier-free apartments accessible for seniors with disabilities; and two units will be designated for use by 360Kids, a local organization that helps at-risk children and youth.

The designated apartments at the new building will be held for teens or young adults exiting the program, who are waiting for permanent housing and are ready to move on to schooling or apprenticeship programs, according to Clare.

“We’re trying to get a mix of young people and seniors,” he says. That way, “seniors get a chance to see young people in a positive light,” and the young adults, some of whom may not have spent much time with seniors or elders, can benefit from the stability of the building. There may also be opportunities for practical apprenticeship at Cedarcrest Manor, he adds.

Clare, who attends Grace Anglican Church, adds that he has been impressed with the participation of the Mennonite churches in the area: “They really walk the walk.”

When asked why it’s important for Christians to be involved in affordable housing, he says, “If you want to build community and do Christ’s work, the fastest way is to provide shelter.”

A housing-first model, in which permanent housing is provided to all regardless of employment status, sobriety or any other factor, offers both individual and social benefits, he says. If people have housing, they experience less police interaction and use fewer emergency services. Those living with mental health issues are able to fill prescriptions with a permanent address. There is also less anxiety and pressure when housing is secure. Providing housing helps people find “a place to sleep and some permanency in [their lives],” he says, adding, “This is what God calls us to do.”

If all goes to plan, the new building is expected to be completed by the end of this year and ready for occupancy in January 2020, according to Clare. 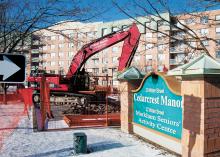 A crane breaks ground on the former parking lot at Cedarcrest Manor in Markham, Ont. The new building will have 32 units for low-income and disabled tenants. (Photo by Myron Nicholson)