What is appropriate humour? 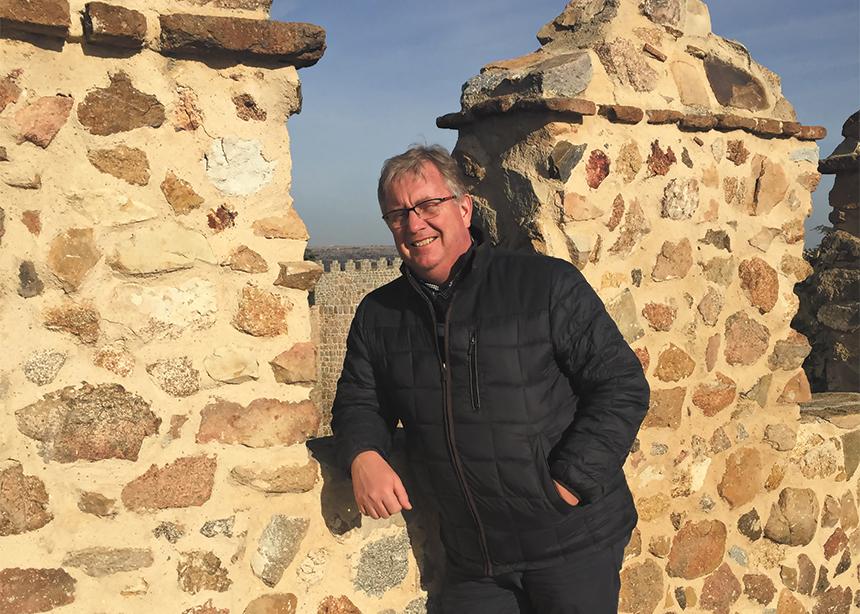 Brian Froese, associate professor of history at Canadian Mennonite University (CMU), takes a break from his walk along the Walls of Avila, Spain. He recently led a CMU Portable titled ‘You had to be there: A history of humour, laughter, and comical Christianity.’ (Photo by Lorelee Froese)

Edmonton First Mennonite Church invited Brian Froese, an associate professor of history at Canadian Mennonite University (CMU) in Winnipeg, to speak on this very theme, in a four-part series entitled “You had to be there: A history of humour, laughter and comical Christianity,” over a week in early February.

Froese led the congregation to consider the use of humour through the early church era, the Middle Ages and the Renaissance up to modern times. Reading excerpts from various plays, the congregation experienced humour from different ages and discussed whether the humour was appropriate.

The series began with Froese commenting on how humour can build or destroy people, making them feel better or worse. Aristotle saw humour as a form of abuse, reacting to those who made fun of people in the lower classes. In his book Nicomacheas Ethics, he wrote, “[T]hose who carry humour to excess are thought to be vulgar buffoons.” Tertullian felt it was poor form to mock downwards, but making fun of the emperor was acceptable.

Stories of laughter in the early church were rare, Froese said, and Christianity was a call to suffering, not to frivolity. According to Froese, if John Chrysostom, an early Church Father, was asked, “Can you live the true Christian life and be jovial?” his answer would have been a hard no. He saw humour as an affront to the suffering of Christ and used John 16:20  to justify the position that laughing was for heaven only.

As the church entered medieval times, the church’s position started to soften. One practice during this period was called “Easter laughing.” In this practice, the Easter story was told as jovially as possible, in costume with joy, jocularity, and lots of jokes. Since Jesus got the last laugh—having defeated Satan on resurrection day—pranks were encouraged.

St. Benedict was open to joking yet strongly felt that humour should never be at the expense of others. He came down hard on laughter as a distraction from one’s duties as a servant of Christ.

Thomas Aquinas believed that Jesus’ life must have included humour, since he was fully human, according to Froese. Aquinas explored the questions, “Is there virtue in playing games? Is there sin in playing too much? Too little?” Aquinas believed that it was part of humanity’s created nature to participate in humour and that a joyless life was an error.

Froese asked members to read parts by the female playwright Hrosvitha von Gandersheim. Her Latin comedy, Dulcitius, told the disturbing story of three women who were raped and later martyred. At one point, the rapist becomes confused, kissing the pots and pans. Discussion was had around whether rape can ever be humorous.

Moving on to the Renaissance,  Froese highlighted Erasmus’s work. Author of Praise of Folly, Erasmus enjoyed skewering the elites and the laity for their superstitions, Froese explained, adding that, as a satirist, Erasmus expounded on corruption in society and in the church.

Participants discussed the popularity of The Cat Massacre in the 1730s, a humorous tale that was repeatedly told about the killing of hundreds of cats. Some people were amused by torturing animals, especially cats, as they represented the elite, often being better fed than labourers. The cats were dressed up in papal gowns, set on fire and tortured. Froese said that this would not be considered funny today.

The question of appropriate humour was discussed in the novel The Screwtape Letters by C.S Lewis. In Chapter 11, Screwtape, a senior demon, reverses the ranking of human humour. For him, joy is no longer the best form of humour because it leads to kindness; flippancy replaces it, since it is the least useful. According to Lewis, any humour that leads to vulgarity is a triumph for the devil.

Mennonite historian Marie Funk Wiebe wrote about the trajectory of humour from 1900 to 1952, stating that overt humour was initially frowned on in Mennonite society and was treated with suspicion. Tall tales were considered lies. At the 1908 assembly of Canadian Mennonites, the telling of jokes was verboten but, at a 1952 assembly, J.C. Wenger declared that “good, clean humour” was healthy. 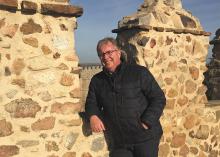 Brian Froese, associate professor of history at Canadian Mennonite University (CMU), takes a break from his walk along the Walls of Avila, Spain. He recently led a CMU Portable titled ‘You had to be there: A history of humour, laughter, and comical Christianity.’ (Photo by Lorelee Froese)

I agree fully that humour is certainly essential to have a healthy life.

Proverbs 17:22 tells us, "A merry heart doeth good like a medicine: but a broken spirit drieth the bones." The concern that I have is that it is with the Trojan Horse of humour that much harm can also be done. Personally, I would place the TV show, The Simpsons on the top of the list that has mocked and diminished much of what is sacred in our society. Yes, there are issues and hypocrisies that need to be addressed but unfortunately, many people enjoy the safe place of a soft comfortable chair from which they laugh at the problem rather than getting up and doing something about it.

When there are hypocrisies in the lives of adults in the faith communities young people enjoy mocking the inconsistencies because it provides a release for the pain of confusion. For some, it gives them an excuse for not doing what is right. When the leaders fail as illustrated by Jesus' comment, "Do as they say but not as they do..." they were likely the laughing stock of the community.

Unfortunately, laughing at them did not help to improve or correct the situation. Humour alone can be dangerous when the humorist is using the failures of others to get a laugh for their own benefit. In reality, they are mocking the pain of the victim and legitimizing the offence of the offender.

Jesus exposed the failure and He also gave serious instruction as to how to correct the situation. I believe that more than once Jesus might have finished his message with, ... neither do I condemn you, go, but sin no more.

Yes, laugh and the world laughs with you, it funny until you are the object of someone's joke.
We need to learn to laugh at our own mistakes and never take ourselves too seriously.

If you have ever tried to learn a second language as an adult you certainly need to be able to laugh at your mistakes.