MCC Saskatchewan delegates explore a response to the refugee crisis 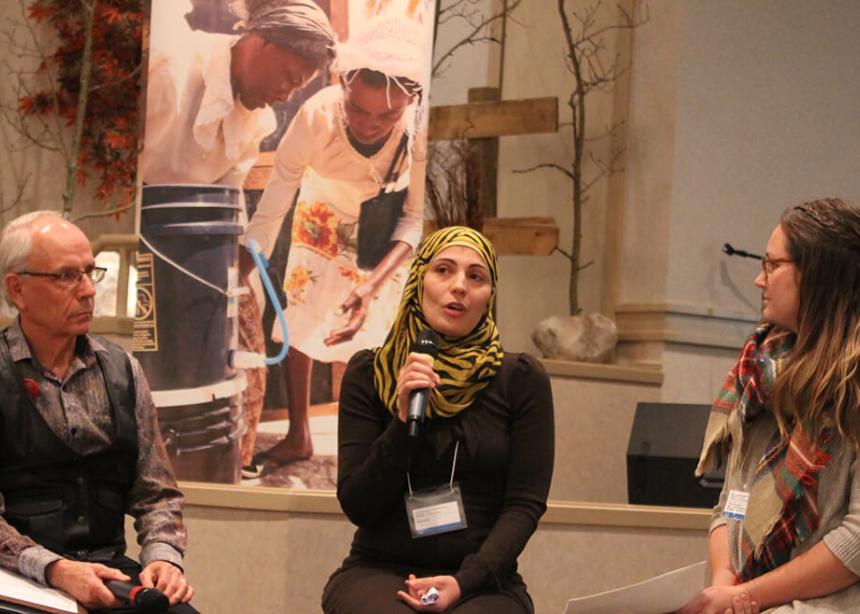 “You maybe can’t save all the lives, but you can save some.” With these words, Doha Kharsa encouraged her audience to sponsor refugees. Kharsa, herself a Syrian refugee who arrived in Canada a year ago, spoke at Mennonite Central Committee (MCC) Saskatchewan’s Encounter and annual general meeting, held Nov. 7 at Parliament Community Church.

In her opening meditation, Rose Graber, pastor of Grace Mennonite, Regina, reminded delegates, “We are [all] strangers and aliens, caretakers of the earth God owns,” adding, “We welcome [strangers] because when we do, we welcome Jesus.”

Hany Al Moliya, a 22-year-old Syrian who documented his life in a Lebanese refugee camp through photographs, shared his story in an Encounter workshop. His vision severely impaired, Al Moliya’s camera became his eyes as he snapped pictures of family members and friends in the camp. But his handicap also became his ticket out of the camp. Because of his need for medical treatment, Al Moliya and his family were selected to come to Regina for resettlement.

Although he came to Canada with his parents and siblings, Al Moliya’s uncles, aunts and cousins remain in Lebanon. He wants to help those still living in the camps, and believes one of the greatest problems faced by refugees is boredom. “What they need most is to fill their minds,” he said of his fellow refugees. Many are educated professionals, but they are “sitting doing nothing,” he said. For this reason, Al Moliya dreams of establishing the first-ever library in a refugee camp. “If [Syrian refugees] came here,” he added, “I would be the first to volunteer to help them.”

Peter Neufeldt of Grace Mennonite, joined them in urging delegates to consider sponsorship. Since 1979, his congregation has sponsored refugees from numerous countries. “They have enriched our lives,” said Neufeldt. “We have become friends. I would encourage us all to do what we can to help those who have had their lives turned upside down, and to share of the abundance that we have.”

Rami Shamma of the Development for People and Nature Association in Ramallah, Lebanon, which cooperates with MCC on several projects, spoke of the desperate situation facing his country. With the influx of refugees from neighbouring Syria, the Lebanese population has grown by 25 percent. Tensions are also growing between refugees and Lebanese citizens, as jobs are scarce and the country’s infrastructure cannot support the increased population.

He described a summer camp the association held for 80 Syrian, Lebanese and Palestinian youth; through art, music and video-making workshops, the youth learned peacebuilding skills. He said the greatest need in his country is the establishment of a peacebuilding institute.

Brian Dyck, MCC Canada’s national migration and resettlement program coordinator, offered statistics to help delegates understand the scope of the refugee crisis. Syria is the country of greatest need, both in the number of refugees who have fled the country and in the number of internally displaced persons, he said.

The ultimate goal for refugees is repatriation, said Dyck. When this is impossible, the second choice is integration in the country to which they have fled. The third choice is resettlement in another country, such as Canada.

Refugee resettlement was a major issue in the recent federal election, and the new Liberal government has promised to resettle 25,000 Syrian refugees by the end of 2015, said Dyck. This means that the Prairies can expect a 360 percent increase in refugees in the near future. Dyck suggested that delegates educate themselves and their churches, advocate on behalf of refugees, and pray for peace and for the safety of people in the Middle East.

For more stories on Mennonites and refugees, see: