‘We want to tell the story’ 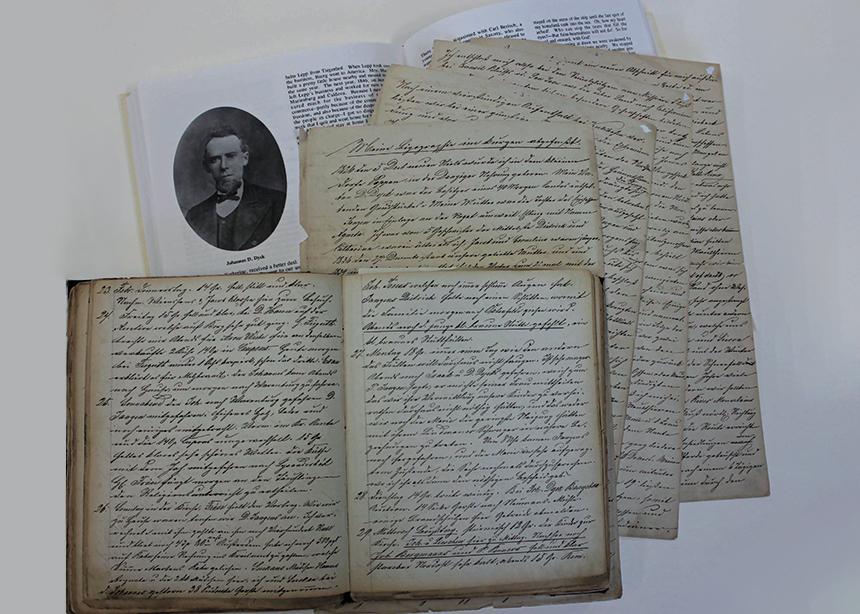 The original diaries of Johannes D. Dyck (1826-1898) tell, among other things, the stories of his adventures in America, including an escape from an ambush during the California Gold Rush. (Photo by Conrad Stoesz)

A Mennonite man escapes an ambush during the California Gold Rush because he had a fast horse. We know his story because he left behind a set of diaries.

Another Mennonite stuffs his child’s doll with British and American currency, and smuggles it out of Russia in 1927. When his whole family is ordered off the train at the border and searched for valuables, the money remains safe inside the doll, sitting under a bench in the waiting room of the train station. Later, he uses the money to buy a farm in Saskatchewan, where the family eventually settles. We know this story because the family donated the doll to a place where it can be preserved.

As Conrad Stoesz, archivist at Mennonite Heritage Archives in Winnipeg, said, “Each piece tells a story.” The diaries and the doll are just some of the pieces he showed during a recent virtual tour of museums and archives dedicated to preserving Anabaptist-Mennonite stories.

TourMagination, which normally leads faith-based group tours to many destinations around the world with heritage and cultural interest to Mennonites, had to get creative while travel is on hold due to the COVID-19 pandemic.

Audrey Voth Petkau, the company’s president, who is passionate about history, and Sandra Reimer, communications strategist, initiated a meeting with eight archive and museum leaders from Canada and the United States who are struggling to “keep the story alive” while their centres are closed to the public during the pandemic.

TourMagination, which celebrates its 50th anniversary in June, has now paired up with these heritage experts to host “The Anabaptist story lives on: Virtual museum and Archive tour,” highlighting unique artifacts, photographs and documents that are part of the Anabaptist-Mennonite story.

Reimer facilitates the online tours on Tuesday evenings in May and June. Each week archivists describe the features of their facilities and highlight some of the unique pieces of the story they house. There is time for participants to ask questions, and the virtual tours are recorded.

During the first tour, Stoesz discussed the importance of stories and how they can raise important questions and reflections.

Was this Johannes “a clever man who fooled officials?” Or was he greedy, putting his family and others desperate to flee Russia at risk? These are the interesting and complicated questions that history invites people to ask, according to Stoesz.

In the second virtual tour, Richard Thiessen, executive director of the Mennonite Heritage Museum in Abbotsford, B.C., took his turn to help “connect and tell our stories” during the pandemic. Using several artifacts, he told the story of a Mennonite church in the Prussian/Polish village of Deutsch-Kazun that faced many transitions and tragedies from the time it was opened in 1834.

During the Second World War, the village was caught between warring sides. Hit by German shelling in September 1937, the church suffered severe damage. A half-dozen Mennonite homes were destroyed and seven Mennonites were killed. The Polish army, suspicious of German-speaking Mennonites, arrested and executed eight men and incarcerated the rest of them.

Within a matter of days, the Germans released the men. A stamp with a swastika on one of the church documents indicates that the Third Reich ruled the region for a time before the Soviet army advanced. Just before the village was overrun by the Soviet army in 1945, the last minister of the church had the foresight to grab several items from the church, bundle them together and carry them with him to Germany, and eventually to Canada.

In his virtual tour, Thiessen showed the church registers, communion cups, plate and tablecloth that the last minister rescued in order to “preserve the story of the church.” One of the registers was damaged by a shell from the initial German attack. Thiessen posed the questions, if people today had to flee on short notice, “would we take anything from church, and, if so, what would we take?”

In describing the role of archives and museums, Thiessen said, “We want to tell the story.”

These virtual tours offer participants a window into the unique artifacts that can help to do just that.

Future virtual tours will visit the Centre for Mennonite Brethren Studies in Winnipeg, and the Mennonite Archives of Ontario in Waterloo, Ont., as well as make stops in Lancaster and Harleysville, Pa., Hillsboro, Kan., and Freeman, S.D. The complete list of tours, information on how to register, and links to recordings from past stops can be found at tourmagination.com/vtour/.

TourMagination anticipates resuming its regular tours in 2021, or whenever the World Health Organization deems it safe to do so. Reimer said that tourism provides important income for many communities it visits around the globe. 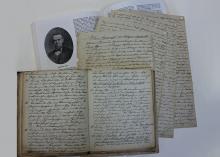 The original diaries of Johannes D. Dyck (1826-1898) tell, among other things, the stories of his adventures in America, including an escape from an ambush during the California Gold Rush. (Photo by Conrad Stoesz) 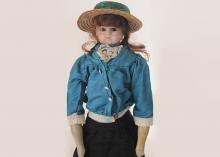 In the doll that Johannes J. Dyck (1885-1948) gave his daughter he hid money and smuggled it past guards as he and his family escaped Russia by train in 1927. (Photo by Conrad Stoesz)