‘We have no safe area under the sky’

In a nation famous for famine, Ethiopian Mennonites seek mutuality while facing drought 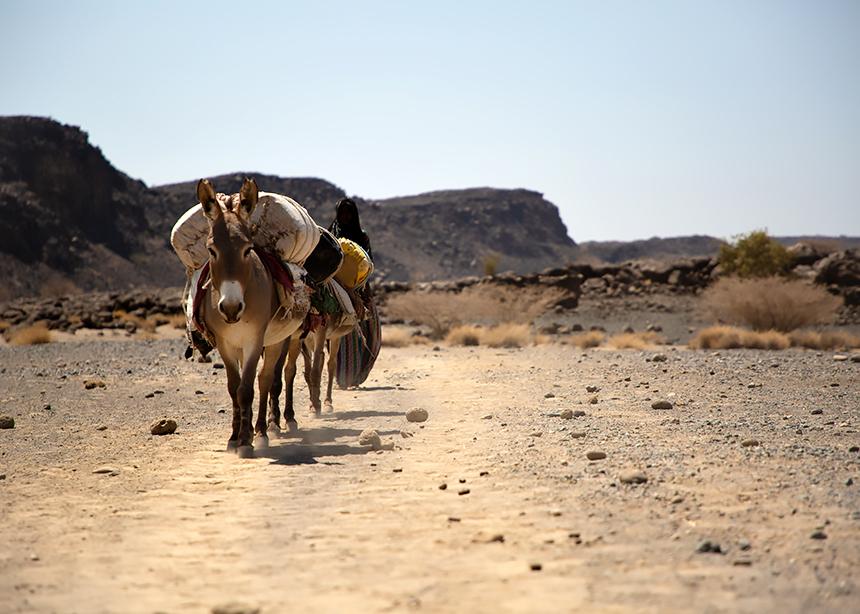 Displaced by conflict and trapped by drought, this woman seeks water in the Afar region in northern Ethiopia. (UNICEF on Flickr.com / Creative Commons 2.0)

For much of my life I associated Ethiopia with famine. I’m just old enough to recall the searing scenes from Ethiopia in the mid-1980s: windswept, dull-beige landscapes; skeletal cattle; distended bellies; flies; people crowding trucks laden with sacks of food; and charitable rock concerts.

It was the most famous famine of modern times, made so in part by BBC journalist Michael Buerk’s landmark report of the “biblical famine,” which, in turn, inspired Irish rocker Bob Geldof to organize Live Aid, an international concert extravaganza watched by an estimated 40 percent of humanity.

Millions were raised, people were fed, Geldof was knighted, and Ethiopia became the face of famine.

While I cannot erase those images from my mind, I now associate Ethiopia more with Meserete Kristos Church (MKC), the rapidly growing Anabaptist denomination in the country. As MKC president Desalegn Abebe notes, Ethiopia is home to a quarter of the Anabaptists in the world.

For perspective on the size and vibrance of MKC, Mennonite Church Canada executive minister Doug Klassen points out that the number of people baptized annually by MKC is greater than the total number of people in MC Canada. (At the time of writing, Klassen, and fellow Canadian Mennonites Norm Dyck and Fanosie Legesse were visiting Ethiopia for the MKC annual gathering.)

Ethiopia is clearly a place of spiritual wealth and vitality for Anabaptists.

But the country is also in the news again because of drought and hunger, in addition to ongoing civil violence.

“Red alert” reads the World Food Programme (WFP) website: “2022: A year of unprecedented hunger.” The alarm sounded by the world’s largest humanitarian organization is not related only to Ethiopia, but Ethiopia is one of the “hunger hotspots.”

WFP reports that “50 million people in 45 countries are teetering on the edge of famine.” In Ethiopia, more than seven million people require food assistance, according to a United Nations report in June referenced by Abebe. At that point, nearly 2.1 million livestock had perished, with another 22 million “very weak and emaciated,” and thus unable to provide the milk that is a main source of nutrition for children.

While northern and western parts of Ethiopia have been hardest hit by the civil violence—compounded by dry conditions—the worst drought is hitting the southern part of the country. Speaking by video call from Addis Ababa, Abebe says that eight MKC churches are in the area hardest hit by drought. They are semi-nomadic pastoralists, he says. Their livestock have died.

MKC sent a team there in August to provide training, encouragement and grain.

While Mennonite Central Committee (MCC) works with MKC and other partners in the areas affected by violence, MCC is not currently active in the southern drought region. It does, however, work in numerous other countries on WFP’s list of emergency areas.

All those emergencies are, of course, both eclipsed and exacerbated by the crisis in Ukraine. In addition to dominating headlines, the Russian offensive has restricted food supplies, and increased food and fuel prices. Unprecedented need meets an unprecedented jump in the cost of meeting that need.

At the time of writing, a ship chartered by WFP was headed from Ukraine to the Horn of Africa with 23,000 tonnes of wheat.

One lesson of the famine in the 1980s was that the world needed to start caring before scenes of disaster appeared on their screens. That moment is now.

With reporters and experts drawing links between the ’80s and the present famine risk in Ethiopia, I asked Pastor Abebe the question on the top of my mind: What is it like to be from a country known for war and hunger? He responds: “You feel bad inside. . . . We, the people of Ethiopia, are sandwiched between drought and war. This is a desperate thing to see happening in your nation. . . . I have no words to explain how it feels to be a minister for people [in this situation].”

Abebe says the worst part is the compounded disasters of conflict, drought and, most recently, flooding. “We have no safe area under the sky,” he says, explaining that there is no place to relocate people to. “It is heartbreaking. We have no option except praying to God to do something from nothing. . . . Our challenge is not bigger than God.”

Abebe draws on the biblical story of Hagar. After Abraham sent her and their shared son Ishmael into the desert, her supply of water ran out and she gave up hope for the child. But an angel appeared, and with the angel water also materialized.

“That is my prayer,” says Abebe, “[for God] to refresh our dry land with blessings of rain from heaven.”

For him, drought not only causes suffering, but it hampers the work of the church. “Brothers and sisters who could play a great role in the ministry for the kingdom are dying because of lack of food,” he says. Supporting them will allow them to return to the work of “reaching unreached people.”

“This is a mutual thing,” Abebe says, “We are all created in the image of God.” While Ethiopia is currently lacking in some ways, he says the country and church have “many good things to share.”

Indeed, MKC will share much as host of the next global gathering of Mennonite World Conference in 2028. Abebe looks forward to providing opportunities for Mennonites from elsewhere to learn the story of MKC and how it has grown. He believes that, if people learn the history and culture of Ethiopia, they will not see it just in terms of poverty, drought and war.

To contribute to relief efforts, visit mcccanada.ca or donate to Mennonite Church Canada or your regional church with the designation: "MKC Emergency Relief."

By Will Braun, Senior Writer

Mennonite Central Committee (MCC) donors contributed $1.1 million to the most recent urgent appeal. The appeal was a joint effort with other aid agencies and the federal government, which matched donations.

Donations are being used to respond to the unfolding humanitarian crisis affecting sub-Saharan Africa, as well as other regions. The number of severely food-insecure people has doubled in the last two years.

MCC’s involvement in the appeal is through its membership in the Canadian Foodgrains Bank.

Bruce Guenther, director of disaster response for MCC, emphasizes the multiple factors causing hunger. Conflict, displacement, changing weather patterns and COVID-19 often compound natural disasters. On top of that, the “inflationary effect of the Russian invasion” of Ukraine has made matters much worse, he says. Food has been stuck in Ukrainian ports, causing shortages, as well as steep increases in global commodity prices. Oil prices also play in significantly.

Guenther says the price of sorghum in South Sudan is up 43 percent since the last time MCC made a purchase there. The cost of the food basket MCC distributes in Syria have gone up 38 percent since last year. It all means MCC needs more money to maintain existing levels of support.

MCC’s largest humanitarian responses are in Syria and Lebanon. Other countries in the Top 10 in terms of MCC crisis response include, in alphabetical order: Colombia, the Democratic Republic of the Congo, Ethiopia, Haiti, Myanmar, South Sudan, Ukraine and Zimbabwe.

Do you have a story idea for Will Braun? Send it to seniorwriter@canadianmennonite.org. 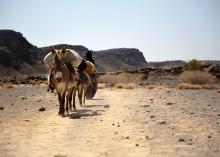 Displaced by conflict and trapped by drought, this woman seeks water in the Afar region in northern Ethiopia. (UNICEF on Flickr.com / Creative Commons 2.0) 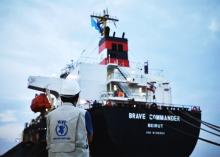 Disaster relief for Ethiopia (and the rest of the Horn of Africa) is an absolutely vital response to the misery, helplessness and disempowerment of the present crisis. But we also need to look at the root causes. It is now clear that the increase in both the frequency and the intensity of droughts in that part of the world is primarily a function of the climate crisis, and therefore a result of our fossil fuel dependency. Love for our Ethiopian brothers and sisters must include taking urgent action, not only to reduce our personal and church carbon footprints, but also engaging in the advocacy and direct action necessary to achieve real government policy changes to drive down the the over 60 percent of emissions from Canadian heavy industry. For the sake of our neighbours, we cannot afford to hide from our responsibility as citizens to work for transformational change.