Land acknowledgment can be bridge with Indigenous Peoples 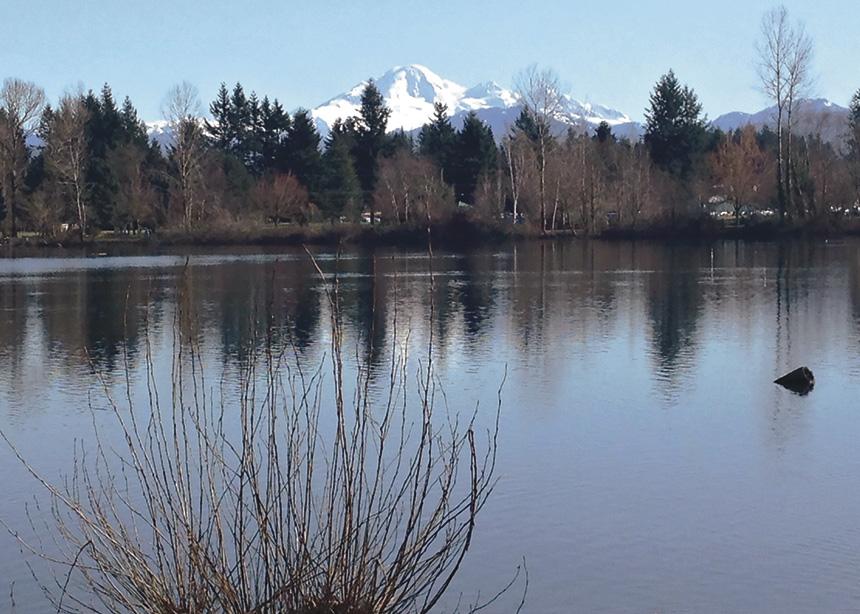 Although Mt. Baker is located in Washington state, traditional Salishan territory, its presence is part of Abbotsford, B.C.’s skyline. Abbotsford is home to the Matsqui First Nation, affiliated with the Stó:lo Nation. (Photo by Amy Rinner Waddell)

In recent years, whether attending church meetings or public or community gatherings, Canadians may have heard opening words similar to these: “We gratefully acknowledge that we are meeting today on the traditional, ancestral territory of [local Indigenous group].”

Especially since the national Truth and Reconciliation Commission’s (TRC) report and Calls to Action published in 2015, Canadians have tried to acknowledge wrongs done over the years to Indigenous Peoples. One step in this process is recognizing that all of Canada was once inhabited solely by First Nations peoples before it was settled by others.

The idea for making land acknowledgment statements may seem new, but it dates back to the tradition of Indigenous nation-to-nation protocol in visiting and welcoming. “It was common practice among Indigenous people to acknowledge being on each other’s territory,” explains Bridget Findlay, coordinator for Mennonite Central Committee B.C.’s Indigenous Neighbours program. Findlay also works alongside the Indigenous Relations Task Group of Mennonite Church B.C.

As congregations consider their use of land acknowledgments, many issues arise. Why make such statements at all? What is the proper wording? How and when will it be used? Is a mere statement adequate and what are the implications of making it?

While many people appreciate the effort to make public land acknowledgment statements, the practice is not embraced by all. Findlay says the reasons for objecting to the practice are varied.

“Some people don’t like the term ‘colonization’ and just want to move on from the past. Others have been concerned that in making the statement [about Indigenous land claims], legally it could be used by Indigenous people to reclaim the land, and people worry that they will lose their homes or be forced to return to their family’s country of origin.” Others think that Indigenous people get enough recognition—why should we highlight that culture above all others?”

Last year, Mennonite Church B.C. developed a land acknowledgment with non-specific geographic wording so it could be used anywhere in the province. It reads as follows: “We respectfully and gratefully acknowledge that we gather on the unceded, traditional, and ancestral lands of Indigenous First Nations.”

The MC B.C. Indigenous Relations Task Group prepared the statement and presented it to the Leadership Board last fall. It is now posted on the MC B.C. website and letterhead and was used to open this year’s MC B.C. annual general meeting.

Several congregations in MC B.C. have also made efforts to acknowledge their presence on what was once Indigenous territory.

Land acknowledgment for the congregation dates back to 2016, when Brander McDonald was Indigenous Relations staff person for MC B.C. “At the MC B.C. annual meeting in February 2016 he encouraged and challenged congregations to be more engaged in the work of reconciliation, especially as the 94 Calls to Action from the TRC had been released the previous year,” recalls Henry Krause, who was Langley’s pastor at the time. “He said that the least we could do as congregations was to adopt a land acknowledgment statement to recognize the First Nations.”

The land acknowledgment statement is printed in the church bulletin and other documents and can be found on the church website.

According to Tim Beachy, the current board chair, “In the beginning, we simply inserted the land acknowledgment in our weekly bulletin. A bit later the acknowledgment was verbalized during our weekly services. While the document was started by a small group, it quickly moved to full and regular use. I do not believe it has ever been recalled forward for a ‘decision.’ It is an assumed and valued practice.”

The observance of the Lord’s Supper is also a place where the congregation uses a form of land acknowledgment. Pastor Ian Funk says, “For the past five years we have added a practice to our communion in which we recognize the land and history of the place we are journeying [through] with Jesus, through bread and wine. This changes from month to month, but there is always a component of recognition.”

Peace Mennonite Church
The land acknowledgment used by Peace Mennonite reads as follows: “Peace Mennonite Church in Richmond, British Columbia, humbly acknowledges that our activities take place on the unceded traditional territory of the Musqueam Nation. We are grateful to our hosts for their hospitality and commit to respect and steward with them this land Creator God has made and given us for that purpose.”

Lorne Brandt was a member of Peace Mennonite Church’s missions and service committee a couple of years ago and pushed for the congregation to make the land acknowledgment statement. “I consulted Tsawwassen Band elder Ruth Adam and Hummingbird Ministries Mary Fontaine (Cree),” Brandt said. “They were both against muddying the waters by bringing too many Christian-sounding words into it, even though both are Christian.”

The idea at the time of adoption in 2020 was for the statement to be used at general meetings and perhaps be added to the church website and/or bulletins. It was not originally intended to be used in Sunday morning worship but, Brandt notes, “Actually, many of our worship leaders are now using the statement or a variation of it at the beginning of most of our worship services.”

Eventually, this statement was passed by the church in 2019: “As a faith community, we believe that the earth is a gift from God, the Creator. Together with the first people of this land we are called to be stewards of this earth that sustains us, and we are grateful for the privilege. Therefore, we acknowledge with deep gratitude our presence on the unceded, traditional, ancestral homeland of the Matsqui First Nation, affiliated with the Stó:lō Nation. While the land is an important part of our faith, we recognize that it has always been at the centre of Indigenous life, culture, and spirituality. May we treat this land and all its people with respect as we strive for peace and right relationships with all who share it.”

However, at the Emmanuel annual meeting in February 2020, some members wanted clarification about how and when the statement was to be used. A majority said they preferred it not be used every Sunday. Then the process was put on hold during the pandemic that ensued.

At a congregational meeting on June 15, a motion was passed to have the land acknowledgment be used on the church’s website, in the National Day for Truth and Reconciliation Sunday service, and in any other Sunday service, at the worship leader’s discretion.

Relationship building
Land acknowledgment is a first step in recognizing local Indigenous Peoples and learning more about them and their culture. Before a church group moves forward with a land acknowledgment, Findlay says, they should ask why they are doing it. “What do you hope listeners will get from it? How will it be used? The whole idea is: it’s supposed to be honest, authentic, from the heart, showing respect to the Indigenous people who live here. Rote recitation doesn’t come across well. If it takes a year to develop a statement, that’s fine. And if you make a statement and don’t do anything else, it doesn’t mean a lot.”

Findlay says that fostering respect and relationship building are the most important thing in relating to Indigenous Peoples. She suggests that it is courteous to contact the local band to get their feedback on the wording of the land acknowledgment statement.

“It’s important to do your homework, to establish whose territory you are on,” she says. “Often, it’s multiple [groups] because traditional territories overlap. Furthermore, just establishing a land acknowledgment can be an icebreaker, a helpful step towards reconciliation as people learn more about Indigenous Peoples and their culture.”

Findlay has prepared resources to help church groups learn more about and prepare land acknowledgment statements, including sample statements. For more information, contact her at bridgetfindlay@mccbc.ca. 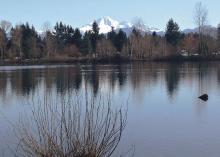 Although Mt. Baker is located in Washington state, traditional Salishan territory, its presence is part of Abbotsford, B.C.’s skyline. Abbotsford is home to the Matsqui First Nation, affiliated with the Stó:lo Nation. (Photo by Amy Rinner Waddell) 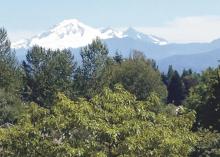 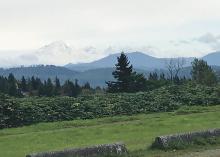 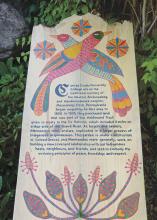 A sign at Conrad Grebel University College, Waterloo, Ont., was unveiled in September 2017 acknowledging the traditional land of the local Indigenous Peoples. It mentions the arrival of the first Europeans in the 1800s and expresses the intention of Mennonites today to “work on building a new covenant relationship with our Indigenous hosts, neighbours, and friends.” (Photo by Barb Draper)