We’ve heard the truth. Do we have the courage for reconciliation? 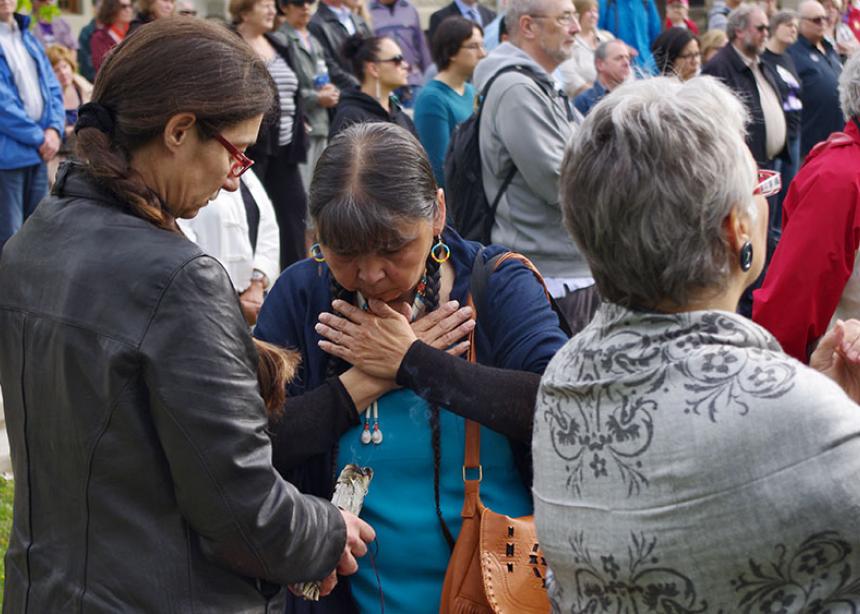 <p>Lorraine Clements holds burning sage for Gerry Shingoose, a residential school survivor, as she smudges at the closing ceremonies of the Truth and Reconciliation Commission in Winnipeg. (Photo by J. Neufeld)</p>

“Reconciliation is not an aboriginal problem. It is a Canadian problem. It involves all of us.” Justice Murray Sinclair spoke those words on June 2 at the closing ceremonies of Truth and Reconciliation Commission in Ottawa. I watched a live feed of Sinclair’s speech at the University of Winnipeg, among tens of thousands of Canadians who tuned in to witness the historic event. Sinclair reminded us that we were not simply spectators.

After watching the broadcast I joined a crowd who marched solemnly through the streets from the university to Thunderbird House, a centre for aboriginal cultural events. There we shared a feast and a pipe ceremony.

Standing in line for a bowl of stew, I met a young man named George. He looked to be in his early 30s—around my age. He had an easy smile and wore his hair tied back in a short twist at the nape of his neck. His eight-year-old daughter was climbing all over his arms and back. She was proud of having walked the two-and-a-half kilometres from the university. Now she wanted her dad to hold her so she could rest her feet.

I chatted with George about my own three-year-old son, and I tried to imagine how I would feel if government officials arrived on my doorstep, seized my children, and sent them away to an institution where they would be taught to forget their language and despise the spirituality of their parents. It was a terrifying thought. Earlier that day I’d heard an First Nations woman say that her generation was the first to raise their own children.

Both of George’s parents were sent to residential schools. His father died without ever speaking a word about the experience. His mother was watching the live feed of the closing ceremonies from her home in South Indian Lake. George felt he was representing her in some way.

As we sat outside on the grass eating our stew, George told me how he’d grown up without any knowledge of residential schools. Whenever he saw one of his people homeless or drunk on a street corner, he felt embarrassed. It was only after he started reading about residential schools and the history of colonialism that he began to understand the trauma his people had suffered. There was no animosity in his voice. He was open, eager to talk.

I told George about my own ancestors—Russian Mennonites who came to Canada to escape a different kind of oppression. They were given fertile prairie farmland that the Canadian government had recently been cleared of its Ojibway, Cree and Metis inhabitants through a combination of military force and unfair treaties.

“They didn’t know,” George said, shaking his head. I sensed he wanted to absolve me in some way.

While my Mennonite forebears may not have understood the extent to which they were displacing the inhabitants of their new home, they were—and still are—beneficiaries of a system built on the oppression of others. The consequences of that colonial policy can still be seen today in the disproportionate incarceration rates among indigenous people, the statistics of missing and murdered indigenous women, the abysmal state of Manitoba’s child welfare system where 87 per cent of children in care are aboriginal. Mennonites also had a hand in running residential schools.

Those are the facts. “But simply dealing with facts, dry and hard, will not resolve our differences,” said Stan McKay, a Cree elder and former moderator of the United Church of Canada who spoke at the event in Winnipeg. McKay had a kind smile and a gentle voice, but the thing he asked for was difficult. “I’ve spent a lot of time with church people,” McKay said, “I am very tired of people who want to help us. We don’t need help. We need relatives…Our philosophy is that we are all related. If we are to be truly healthy as a society we must be together in dignity.” McKay asked for an “attitude change” from non-aboriginals. “All of us need healing, all of us need each other, all of us can be transformed,” he said, “not because we are special, but because we are relatives.”

Cultural genocide doesn’t occur in a vacuum. It requires a foundation of cultural superiority. A Mennonite friend I met at the event confessed to me that his first thought when he showed up on the front lawn of the University of Winnipeg for the opening ceremonies was that “there was just a bunch of Indians here.” I understood what he meant. He used those shocking words intentionally to acknowledge his own inherited sense of superiority.

Mennonites have also been wounded by colonialism. Our wound is a superiority complex. I don’t believe true reconciliation will be possible as long as we harbour the belief that our culture, our values, our spirituality are superior to those of our First Nations relatives.

During the TRC hearings in Vancouver I listened to residential school survivors speak through their tears about the abuses they suffered at residential schools. Many of them also spoke with grief about the ways they had turned that abuse around and hurt their own children and families.

The courage it must have taken for them to be this vulnerable stuns me.

I wonder if we have enough courage to do the same?

“Children taught to hate themselves says TRC report”- Highlights of the concluding document and events in Ottawa surrounding its release on June 2, 2015.  (Janice Schroeder)

Lorraine Clements holds burning sage for Gerry Shingoose, a residential school survivor, as she smudges at the closing ceremonies of the Truth and Reconciliation Commission in Winnipeg. (Photo by J. Neufeld)

About 200 people marched from the University of Winnipeg to Thunderbird House for a feast and a pipe ceremony following the release of the Truth and Reconciliation Commission report. (Photo by J. Neufeld)