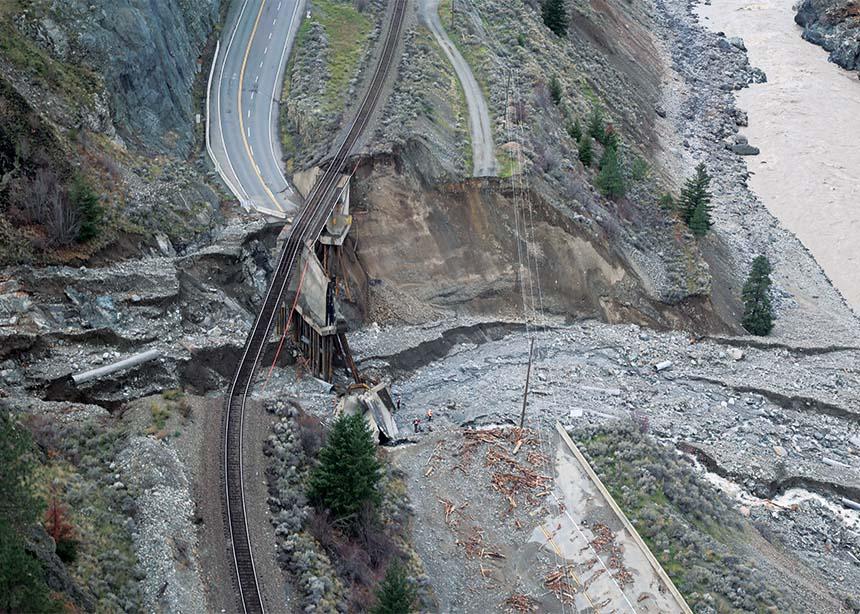 Highway 1 in B.C. washed out by severe rain on Nov. 17. (B.C. Ministry of Transportation and Infrastructure photo (CC BY-NC-ND 2.0))

Climate change has been on the agenda of our global village for a generation. The science, the discourse and the mood have shifted over time. As has reality. What was once a dark cloud in the distance has become an atmospheric river overhead.

At this particular moment, with the so-called “last chance” UN climate conference in Glasgow now behind us—an event reported on with the usual mix of grasping optimism and sceptical resignation—I asked eight people for their views on the climate crisis.

I asked several young people if they think about what the world and their lives will be like in 2050.

“I spend a disproportionate amount of time thinking about the future . . . imagining worst-case scenarios.” At the same time, she knows she needs to be “grounded in the moment rather than working from the terrifying unknown.” Thinking even further ahead, she wonders about people from whom climate crisis will be their starting point in life.

Hayden Epp says he is not the kind of person who thinks about the future a lot, although the fourth-year student at Conrad Grebel University College, Waterloo, says, “When I do, I don’t have warm and fuzzy feelings.”

Jonas Cornelsen has one grandpa who died at 101 and another headed in that direction, so he figures he better be thinking long term. He is 28 now, so the 2080s or even 2090s may well be in his genes. “I do fear for what that may look like,” he says.

He also wonders what the world will be like for his kids. If he has any. Climate change is one of the factors he and his partner consider when discussing the possibility of having kids. His friends talk about it too.

“What are the prospects of the generation of kids we would raise?” he asks. Will the world be one they would want to live in?

Cornelsen says there are still lots of good reasons to have kids, and he has “gotten past the notion that having kids is irresponsible,” but he surely feels a “moral responsibility” to the kids of the future, whether they are his own or not.

Like Cornelsen, Ava Wood, Sarah’s 15-year-old sister, thinks about her own future as well as the future of those who will come after her. She says her concern is particularly for the intense climate impacts that her grandkids “will probably have to face.”

She also talks about the heat and lack of rain last summer in her area of Saskatchewan, as well as abnormal winter weather. These noticeable changes help make something that can seem abstract much more immediate.

Similarly, Morton Ninomiya, who is currently at a work placement in Vancouver, talks about how the waves of extreme weather in B.C. have made the climate crisis hard to ignore.

What role do people see for the church?

Sarah says it is really important for her to hear about climate from a Christian perspective. Her message to church leaders and parents is simple: “Keep having the conversations. Don’t be shy or think that it is too late, or that it does not matter.” And to other youth, she says, "We are not too young to help."

Christen Kong talks both about her own church—Toronto Chinese Mennonite—and the broader church. She is a grad student at the University of Toronto. She speaks of the community gardens and pollinator garden on their church grounds. “Our church invited the community to build a relationship with the environment,” she says, “which, in turn, emboldened community resolve towards tending to their local environments and prioritizing the welfare of all of living beings.”

More broadly, she says, “I believe Mennonites can harness their knowledge of nonviolent negotiation, mediation, restorative justice and peace as assets when mending the relationship with our natural environment.”

Juliana Morillo, a member of the Mennonite World Conference Creation Care Task Force, says that environmental issues are not discussed a lot in her home church in Bogotá, Colombia, although she is part of a creation-care working group there. In her context, she says that environmental concerns are often overshadowed by other issues, including the violence and upheaval in Colombia following the collapse of the 2016 peace accord.

In Saskatchewan, Kirsten Hamm-Epp is helping to organize two climate-related events for youth within the regional church. The intent, she says, is to help provide them with language and tools “to sift through what they’re hearing, and to do so through the lens of a follower of Jesus.” After laying that groundwork, they will talk about how to use those tools.

“We’re beyond the point of needing to say this is important,” notes Hamm-Epp.

In Cornelsen’s mind, the task now is to “shape a generation that does not take our planet for granted.”

Back in Ontario, Hayden Epp, like the other young-ish people I spoke with, is not inclined to rant or point fingers at older generations. His tone is more matter-of-fact than urgent, including when he speaks of church response to the climate crisis: “[It's] something that’s gonna have to happen at some point, so why not get on it.” 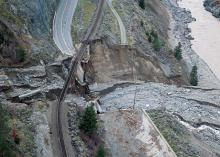 Highway 1 in B.C. washed out by severe rain on Nov. 17. (B.C. Ministry of Transportation and Infrastructure photo (CC BY-NC-ND 2.0)) 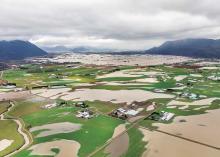