Walking together . . . rather than around each other

Christians and Muslims gather for dialogue 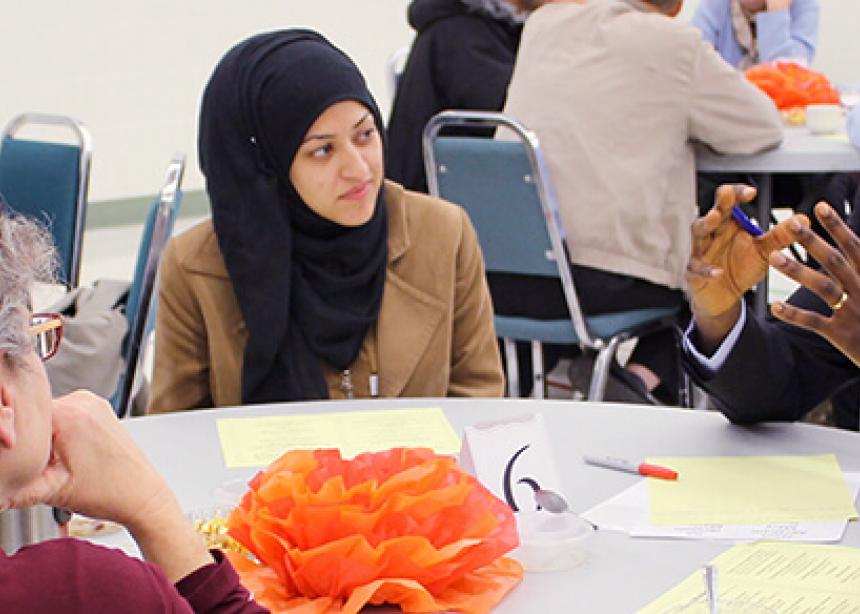 She is a novelist and world traveller, speaks Mandarin and has a brown belt in karate. Shaimaa Kraba also wears a hijab and is a Sunni Muslim. At the third annual Christian-Muslim dialogue in Edmonton on Oct. 17, 2015, emcee Miriam Gross humorously addressed the issue of stereotyping when she quipped, “There is more to her than a ‘scarf-clad’ girl. After all, it’s a hijab, not a halo!”

Clerical collars, thaqyiah (men’s caps), hijab and casual western dress were not reliable predictors of attitudes, abilities, personality or even faith perspectives, as the diverse group of 150 Christians and Muslims were intentionally assigned to mixed seating in the gymnasium of St. Charles Roman Catholic Church to encourage interfaith discussion. Questions such as “What do you most like about your faith?” and “If you could change one thing about your faith, what would it be?” helped to focus the interactions and kept discussions lively.

Between table sharing times, a variety of speakers from both Christian and Muslim traditions took a few minutes each to share personal stories and important aspects of their faith, and to encourage respect and love between groups.

Jane Alexander, an Anglican bishop, asked, “Could we walk together, rather than around each other?”

Farroq Maseehuddin, a Sunni Muslim, shared a story about an important friendship he and his wife formed with a Christian couple while they were all spending four years teaching in Kuwait. “We became very good friends, [resulting] in a deepening of faith and appreciation for the others,” he said.

Of the event, Donna Entz, one of the organizers and a Mennonite Church Alberta staff person, said, “My first impressions, as I talk to people, was that they said they had a really good time around the tables.” One of the main goals for this year’s event was to encourage personal sharing. “We worked hard on that,” Entz said.

The dialogue took on special urgency this year, because of the federal election campaign in which the niqab and Syrian refugee issues were being debated.

“One of the planners [of the event] was talking about being born in Canada to a Muslim family and growing up interfaith,” Entz said. “The last two weeks were the first time in her whole life that she felt uncomfortable knowing that her clothes identify her as a Muslim. The dialogue felt like a positive way to deal with the discomfort that the elections were bringing up.”

Asked about the importance of the dialogue during the election, a Muslim organizer who declined to be identified, said, “It is nice to see the support of our Christian friends because there are Muslims out there who don’t have this.” She expressed concern about “Islamophobia” in Canada, and said that the Muslim community is working on how to deal with it well.

When a few participants came to argue, instead of interact, organizers intervened. The same Muslim organizer sat at the back table with them, respectfully and firmly engaging their particular Christian views, while not allowing them to negatively encounter other participants. “I just didn’t want them to offend anyone else,” she said. “I think they were not educated about anything. All I know is that they were educated wrong if they believe the Qur’an was made of lies. They need to understand that we have Qur’an stories, just like they have Bible stories. Sometimes you can’t just walk away. You can’t walk away when you are an organizer and a promoter of peace and dialogue.”

The disturbance was kept to a minimum, and most participants remained unaware of it.

Counting conversations, not conversions
Deconstructing Muslim myths
Mennonites learn about hospitality and living for others
Responding to a more religious Canada
Learning to be good neighbours in Nigeria 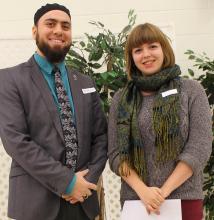