A walk through Mennonite history 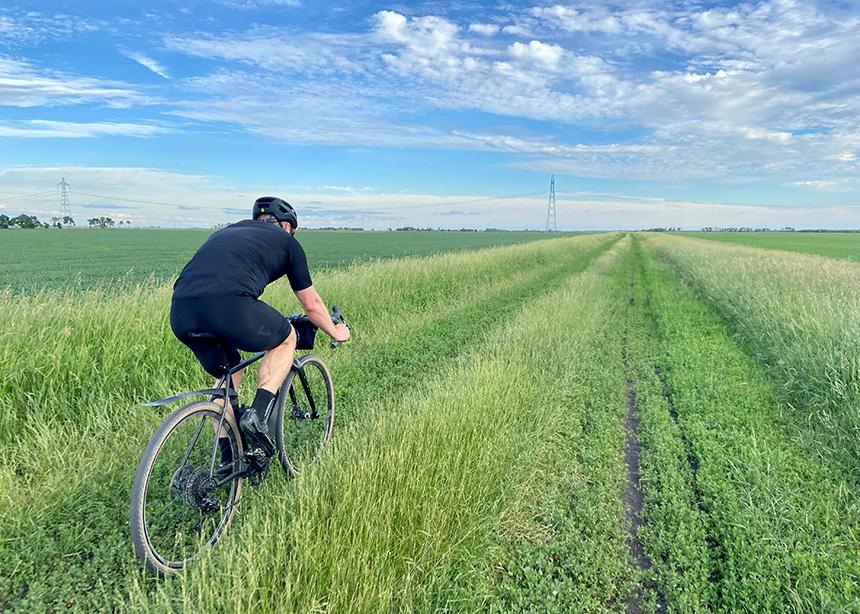 A new trail, spanning almost 55 kilometres across southeastern Manitoba, has been created by a group of Mennonites.

The Peace Trail was dreamed up and implemented by the EastMenn Historical Committee, a group under the umbrella of the Manitoba Mennonite Historical Society, along with community members volunteering on the Peace Trail working group.

“It was seen as a pilgrimage, sort of retracing the steps of the early Mennonites,” says Glen Klassen, a member of the historical committee and a retired microbiology professor who attends Grace Mennonite Church in Steinbach.

The trail begins close to Ste. Agathe, where the first Mennonites to arrive in Manitoba landed in 1874, at the junction of the Red and Rat rivers. It concludes at the Dirk Willems Peace Garden at the Mennonite Heritage Village (MHV) in Steinbach.

The route travels mainly along gravel roads, with sections on paths in the bush and alongside creeks, following the general route the first Mennonites would have used. It features more than a dozen waypoints, including Mennonite historical sites like the Chortitz Church and Cemetery, the oldest Mennonite church on the East Reserve; and the Shantz Immigration Sheds Cairn, marking where Mennonites first stayed when they disembarked from the International Steamboat.

The committee was inspired by another pilgrimage that took place in Manitoba during the COVID-19 pandemic. The Crow Wing Trail, which stretches from Winnipeg to the United States border, closely follows a former Red River cart trail. Many chose to walk a section of it that runs from St-Pierre-Jolys to St. Malo, in lieu of the Camino de Santiago, a famous pilgrimage in Spain.

“I heard about this and thought it was a great idea, and I figured that maybe we should have a pilgrimage for Mennonites,” Klassen says. “Hence the Peace Trail was born.”

Gary Dyck, MHV’s executive director, says it fits with the Mennonite narrative: “As Mennonites, for centuries we’ve been on pilgrimage. It’s not very often that we are long in a country more than 150 or 200 years. . . . We know how it is to have to keep moving and finding . . . .”

The Peace Trail isn’t just for Mennonites, though; it’s for everyone. People might travel the path for many reasons, whether as recreation, learning or a spiritual journey.

“It’s really exciting! We don’t have a lot of trails in our area, so I think this is right away going to be a signature trail,” Dyck says, adding that it feels reminiscent of the way Europe has cycling trails between villages.

He says, although one could drive the route in 20 minutes, it is important to slow down. “To walk through the land our ancestors first came to, at their pace, and to cherish it as we walk through it and notice the little things . . . creeks and wetlands, the wildlife. . . . The slower you get, the more you can appreciate life and others.”

Some waypoints have ecological focuses, like the Tourond Discovery Centre and Rosenthal Nature Park, while others are located in towns that offer many additional sites of their own.

The Crow Wing Trail River Lot Plaques waypoint highlights the Métis people, who first inhabited the land and were displaced from it, and the points of intersection and relationship between Métis and Mennonite peoples.

The Peace Trek opened with a land acknowledgment, and people were encouraged to reflect on it, but it was a minimal part of the day. The deeper work is happening at MHV, which is hosting reconciliation initiatives throughout the fall.

Klassen says the committee started planning the Peace Trail around a year ago, with hopes to dedicate it next spring. But the path has already experienced its first event: MHV and Eden Foundation’s inaugural Peace Trek on Aug. 20. The collaborative fundraiser involved 35 participants cycling, walking and running the trail, raising more than $14,000 for the two organizations to continue supporting the well-being and mental health of their community.

“People were often riding side by side and talking . . . there was a good kind of fellowship that way,” Dyck says. The Peace Trail passes through many Mennonite villages, and it felt significant to remember the importance of each one in the community, he says. “You get that connection as you go and you feel it together.”

Klassen says the committee has already done some fundraising for the Peace Trail and is hoping to get further financial support from the surrounding municipalities. The MHV is planning a two-day walking pilgrimage in 2024 that will be led by oxen pulling a Red River cart, to mark the 150th anniversary of the first Mennonites’ arrival in Manitoba. 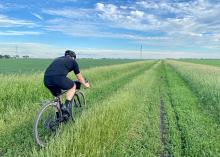 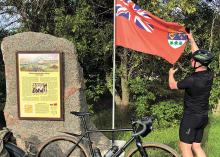 The Shantz Immigration Sheds cairn, one of the waypoints on the Peace Trail, marks where Mennonites stayed when they first landed in Manitoba. (Photo courtesy of Mennonite Heritage Village) 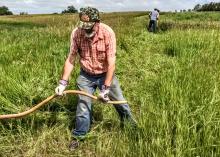 I “grew up” not far from this cairn, in Niverville and Strasburg area.

I am intrigued to read of this development, acknowledging family members who have already contributed and participated for awhile.