A vision for growth 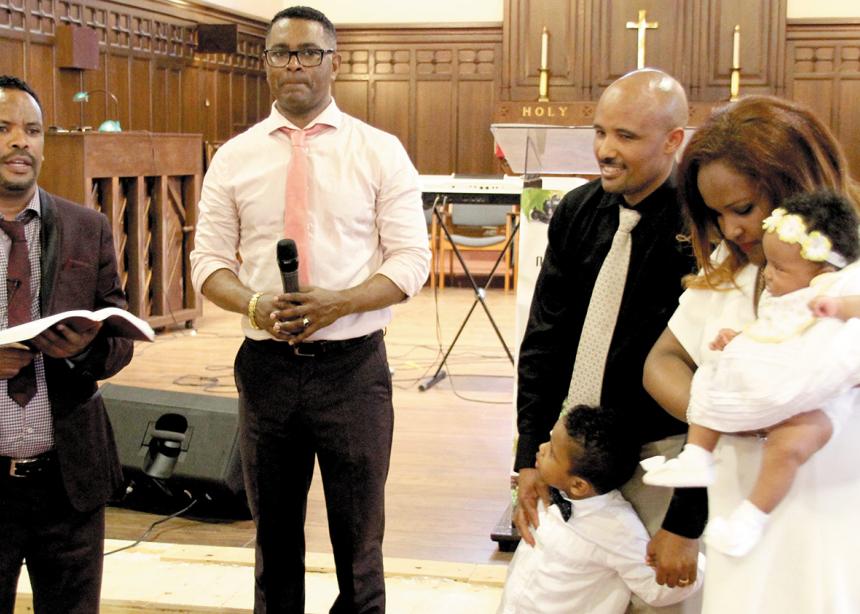 Meheret Evangelical Church has been meeting for worship in Kitchener for 20 years. Founded by four families, the church of about 15 saw slow growth over the years, as refugees from Ethiopia—who dispersed to South Africa, Greece, Sudan, Egypt and elsewhere—made their way to Canada.

But after hiring Pastor Yared Seretse directly from Ethiopia a couple years ago, the congregation has seen growth in many ways. Currently, about 20 percent of the congregation is made up of people who have recently accepted Christ.

In April, Meheret was accepted as an emerging congregation in Mennonite Church Eastern Canada. The church knew it needed to finally belong to a group. The current leaders come from Baptist, Pentecostal and other denominations in Ethiopia, although a few members come from Meserete Kristos Church, a Mennonite World Conference denominational member.

But after praying and searching, a friend of Seretse’s from Toronto encouraged the congregation to join MC Eastern Canada in order to grow in its ability to share the gospel, to carry out the mission to which it believes God has called it.

Meheret means “mercy” in Amharic, and the congregation wants the mercy of God to come upon many people, not just Ethiopians. Already Meheret has a satellite congregation in nearby Guelph with an evangelist working there, and it is planning another for Hamilton. Accompanying the growth in numbers—the congregation has about 120 adults, 50 youth and more than 60 children—is growth in discipleship.

On June 11, the adult sermon, preached in Amharic, was about learning to seek, find and apply the will of God. At the same time, an English service downstairs served both Ethiopian and other youth—from Jamaica and other countries—led by David Ens, the volunteer youth worker and a member of the congregation. After sitting in the first hour or so of the service, children were called to the front of the sanctuary at St. Marks Lutheran Church, where Meheret meets, for a blessing before being sent to Sunday school.

Leaders highlight the need for Meheret to have its own building, and they are negotiating the purchase of a commercial space to turn into a church. Sunday school classes contain too many age groups for effective teaching, due to a lack of rooms. Other programming, including Wednesday prayer meeting, Saturday evening teaching time, women’s ministry twice monthly and early morning prayer meetings, are often held in homes because of the expense of renting and the lack of available space.

The leaders of Meheret—pastors Seretse and Mike Shitaye and elder Aklilu Agonfer—invite their sisters and brothers across the country to pray for them about the building. But the building is a means to an end, they stress. The end is fulfilling the Great Commission given by Jesus to his disciples: “Go therefore and make disciples of all nations, baptizing them in the name of the Father and of the Son and of the Holy Spirit, and teaching them to obey everything that I have commanded you” (Matthew 28:19-20, NRSV).

Besides the work in Canada, the congregation prayerfully and financially supports Adanch Chokol, a blind woman married to a blind man, who works with the many blind women in Ethiopia, where dry, dusty winds contribute to the development of trachoma.