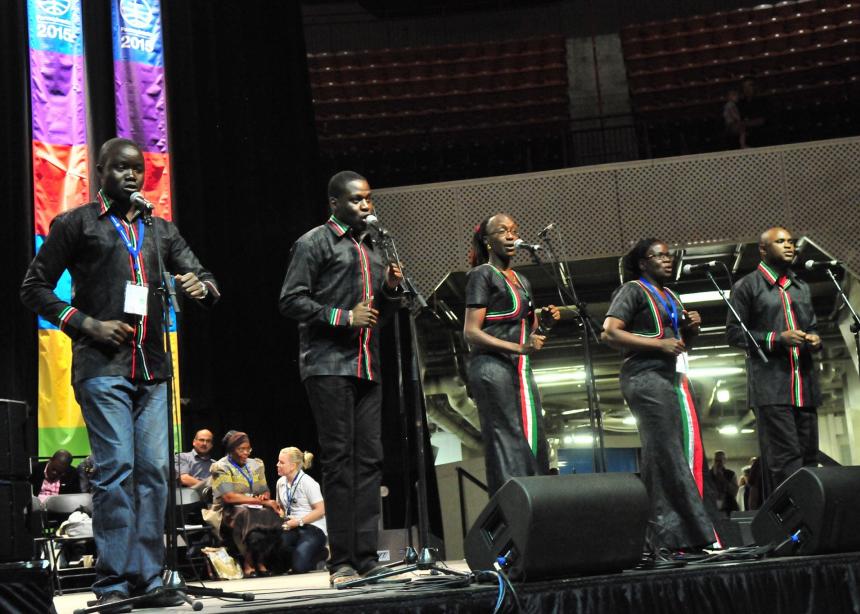 <p>A group of five singers from Kenya sang at the Thursday evening worship service. Of the choir of 30, only these five received visas to come to the U. S. (Photo by Dale D. Gehman for Meetinghouse)</p>

Applying for a visa to enter the U.S. was serious business for many internationals hoping to attend PA 2015, the Mennonite World Conference (MWC) assembly held in Harrisburg, July 21-26, 2015.

MWC organizers report that 75 percent of the applicants who applied for a visa to attend the assembly were successful.

The MWC visa task force–with two members on the ground in Africa, one who moved between Africa and North America, four in Asia, and two in Latin America–assisted visa applicants in completing their paperwork and prepping for their embassy interviews.

Judy Zimmerman Herr and Bob Herr, who were coordinators of the visa task force, were based in the U.S. They organized letters of invitation from MWC, which applicants could use as part of their interview process when applying for a visa, and they maintained a link to the office of Customs and Border Protection, assisting with good communication for people who arrived at U.S. borders.

The U.S. required visas from 44 countries where members of MWC churches live. The investment for individual visa applicants was substantial-$160 USD in most places. Travel costs to consulates or embassies were on top of that.

Task force members observed some patterns in visa denials–those who did not own land, who did not have a career or steady work, who did not have a spouse and children in the country issuing their passports, or who had never traveled outside their country, were more likely to be turned down.

There are frequent surprises, as the following stories illustrate.

The visa task force reports that 1,800 individuals registered for the assembly required visas. MWC officially invited 1,300 of those. These were endorsed by their church in a recognized way, and were able to pay their fair-share registration. The others, just over 500, either did not complete the MWC registration process, could not acquire an endorsement from their church or were from a non-member church, or could not meet the financial requirements. So these fell away before any visa process was started. There were also individuals who were already holding a valid visa and did not need help from MWC.

Of the 1,300 who qualified and received letters of invitation, about 200 could not proceed to a visa application process. This could have been for a variety of reasons: their church could not come together enough to support participants, they waited too long to try to get an appointment at a U.S. embassy, or specific internal MWC church issues delayed or prevented people from getting to the visa interview process.

June and July are always fully scheduled for U.S. embassies, and for two weeks in June the U.S. State Department reported experiencing a “cyber-glitch” that affected their bio-metric data. This was not cleared up till the end of June and impacted about 30 of the 44 U.S. embassies that MWC folks needed to work with.

The task force reports that of the approximately 1,100 who did get to a visa interview, about 830 were successful in obtaining a visa.

The success for visa applications was uneven. The task force had anticipated that young people attending the Global Youth Summit would have a hard time. This was sometimes true but not always. It was anticipated that economic realities would make some applications difficult. This was true, but there were as well many exceptions to this, which was a surprise.

Latin America had an acceptance rate higher than 70 percent, and Africa had about 50 percent—not unexpected.

The task force is not aware of any issues involving border-crossing. From the many who came to the Assembly the task force received only one story of extra questioning, and that story had some explanation that made the questions understandable.

A group of five singers from Kenya sang at the Thursday evening worship service. Of the choir of 30, only these five received visas to come to the U. S. (Photo by Dale D. Gehman for Meetinghouse)

Due to visa complications, some women from Africa were absent from a gathering of MWC women theologians who came from various continents. In solidarity with their missing sisters, the group at PA 2015 decided to send a panel of artwork to the women who were not able to get visas to the U.S. They were invited to sign the back of the artwork. (Photo by Dale D. Gehman for Meetinghouse)