From Vietnam to Ukraine

War Stories: From Ukraine to Canada
88-year-old woman opens her house up for Ukrainians fleeing the Russian invasion 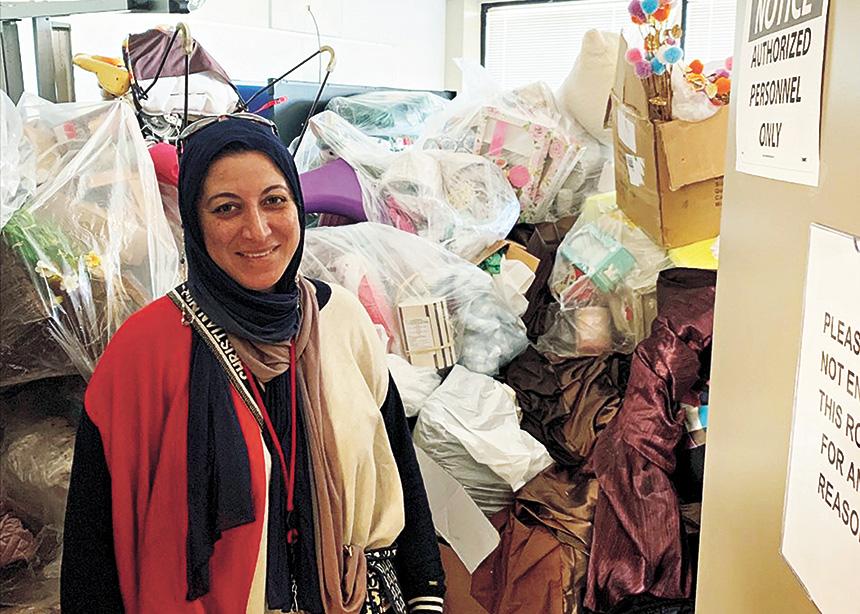 Dalia Abdellatif, a settlement practitioner at EMCN is pictured in a room filled with donations for newcomers to Edmonton. (Photo by Meghan Klein)

The Don Baergen Resource Room at the Edmonton Mennonite Centre for Newcomers (EMCN) is overflowing with donations. Boxes of baby clothes, pots and pans, and bedding, to name a few, are stacked throughout the space. This is the state of the organization’s current refugee donation centre.

The room itself is named after a man who has inspired many, changed the lives of hundreds of newcomers in the Edmonton community, and whose values are infused into EMCN’s DNA. Baergen was one of many Mennonites who have served with EMCN since its inception.

Frieda Claassen, a member of Lendrum Mennonite Church, a Mennonite Brethren Congregation in Edmonton, helped to found the EMCN in the 1970s while supporting refugees from Vietnam.

“I was not too bad talking with people who don’t speak our language, but when it comes to official papers, I felt we needed to create a centre where we can help them,” says Claassen. “We had a missionary from Vietnam, who spoke the language, and some of us from the churches got together, and that is how it came to be. Little by little, it expanded and started developing because the need was there”

Claassen is now housing Iryna Polikarenko and her son Anton, who have fled the war in Ukraine.

“When they announced on TV that the war was going on, and people were fleeing, I started to find out how to go about it,” the 88-year-old says of the process. “I donated money, but I wanted to sponsor the people here in my home.”

She began the process by calling EMCN, which was collecting information from people willing to take in refugees. “When they bring a plane, there is a list of people who are ready to take them. I left my name and number,” says Claassen, who just happened to have a Ukrainian neighbour, who was hoping to help her family and friends by providing a place to stay, but didn’t have the space.

Claassen jumped at the opportunity. Now, the two women are supporting a mother, her 12-year-old son and two single women between them. Together, they create a makeshift family, driving each other to English classes, collecting the needed paperwork and introducing the child to a Ukrainian bilingual school within walking distance of home.

While they are happy to be safe in Canada, Iryna and Anton have left her husband, mother and father in Ukraine.

“It’s not easy for them,” Claassen says. “They do what they can and we will see what the future holds.”

“This Sunday I want to bring them to my church and introduce them to everyone,” says Claassen “Everything has just worked out so great.”

“That community is really putting themselves behind this,” Claassen says of EMCN. “My new friends were able to get everything they needed, including clothing.”

Where EMCN comes in
Refugees from the Ukraine are arriving through the Canada-Ukraine Authorization for Emergency Travel program, and are offered a three-year visitor visa, with the option to apply for a work permit. While they have access to some government support, because of the nature of the situation, with its ongoing fluctuations, funding takes longer to be released to settlement agencies.

EMCN has started a donation centre at its 82nd Street location in response to the closure of the Edmonton Emergency Relief Service Society in August of last year. It is currently only open to refugees who are directly referred from other support agencies.

With the influx of Ukrainian refugees, there has also been a need for donations to help them settle in Canada, and Edmontonians have not disappointed. With Edmonton as a destination hub city for Ukrainian refugees, EMCN is expecting the demand for a resource centre to grow, but it doesn’t have the infrastructure to sustain such growth.

The organization requires funding to continue basic operations, a permanent space including a warehouse and store front; and start-up contributions, including investment, vehicles, technology, equipment and shelving.

Meghan Klien, EMCN’s executive director, is encouraged by recent interest in her organization’s work. “The community has taken notice,” says Klien. “There has been corporate interest [and] foundations looking to invest or provide community support and awareness.”

“It is working, but we have aspirations to work even better,” says Klien. Along with the Refugee Resource Centre, EMCN also provides newcomers with settlement services, language services, employment services, and therapeutic and community programming.

“On my wish list is to do an event with our founding members,” says Klien of Holyrood, Lendrum and First Mennonite churches in Edmonton, hoping to show appreciation to the beginnings of what has become a large and thriving organization for the benefit of newcomers and their communities. 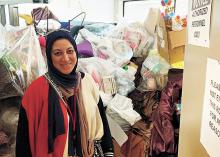 Dalia Abdellatif, a settlement practitioner at EMCN is pictured in a room filled with donations for newcomers to Edmonton. (Photo by Meghan Klein)