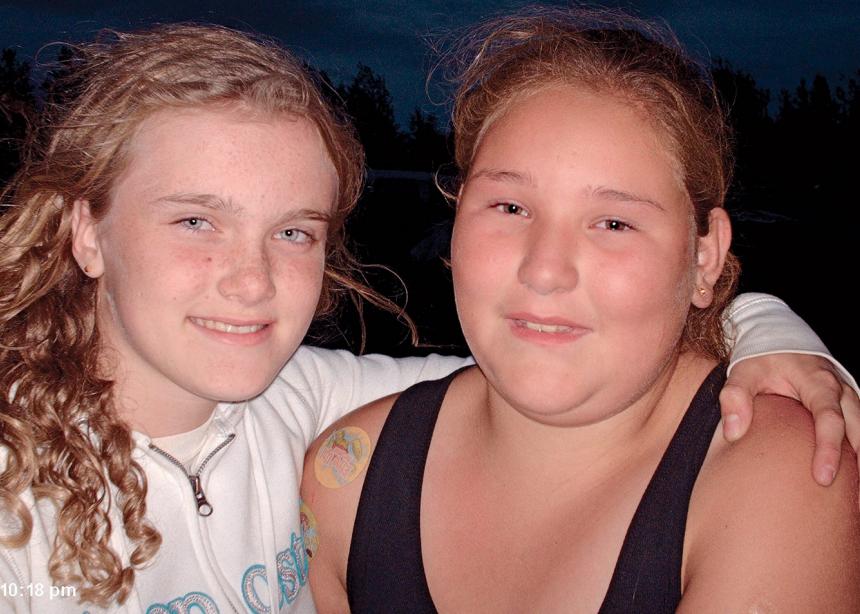 A relationship between a Winnipeg church and a community in northern Manitoba has resulted in a special friendship between two young women.

Mekiah Yonda and Amber Muskego met when members from Yonda’s church, Sterling Mennonite Fellowship in Winnipeg, travelled to Cross Lake in 2010 to run a Vacation Bible School (VBS) program for children in the community. Today, the two describe each other as sisters.

“We just made such a big connection, it was like I’d known her forever,” Yonda, 20, says of the first time she met Muskego. “It’s the highlight of my summer every year, just seeing her.”

“Honestly, I didn’t think our friendship would turn into this sisterly love,” adds Muskego, 18, recalling the first summer she met Yonda. But the deep connection was almost immediate. “That’s where it kicked off, where we were going to be friends forever, till the end. That’s what it felt like.”

Cross Lake is located 530 kilometres north of Winnipeg, and is one of the homes of the Pimicikamak Cree Nation. Sterling Mennonite’s involvement in the community stems from its partnership with Living Word Church in Cross Lake, which was established through Mennonite Church Manitoba’s Partnership Circle initiative.

A group from Sterling has travelled to Cross Lake for a week each summer since that first visit in 2010. In the past two years, members of Bethel Mennonite Church in Winnipeg have also gotten involved.

This past July, in addition to offering a VBS program for more than 150 children in the community, the group from Sterling and Bethel also offered a youth mentorship program and a sports camp.

Yonda is one of a handful of people from Sterling who have made the trip north each summer. “It’s a must. I have to go,” she says, adding that it’s the relationships she’s formed with people in Cross Lake that keep her going back.

During the year, Yonda and Muskego keep in touch via text, FaceTime video chats and Facebook. They also make sure to see each other whenever Muskego is in Winnipeg, even if it’s just a quick visit at the airport.

“We’ve both grown together, we’ve both matured, we’ve both changed,” Yonda says. “It’s hard to describe the bond we have.”

As an only child, Yonda’s friendship with Muskego is especially meaningful. “She has a big heart and she does a lot for the community,” Yonda says of Muskego. “She’s funny, she’s smart, she’s outgoing. She’s a big teddy bear.”

Muskego describes Yonda in similar terms. “She’s funny, she’s caring, she is basically the older sister I never had,” Muskego says. Yonda accompanied Muskego to two ultrasound appointments when she was pregnant with her son Oliver, who is now 18 months old. “She was someone who was there for me when I needed someone to talk to, someone to cry to. She was the one I had there. . . . She’s such an amazing person. Her personality is so bright.”

Cross Lake made national headlines in early 2016 when Pimicikamak Cree officials declared a state of emergency after four teenagers killed themselves in less than three months.

If it weren’t for her friendship with Yonda, Muskego believes she would have committed suicide by now, too.

“We see drunk [people] walking around every day,” she says. “I’ve seen that ever since I was a little girl. You see arguments; it’s hard to be here. There came a point in my life, before I had my son, where I just didn’t want to be around anymore because of how hard things were getting, but then I thought about Mekiah.”

“I managed to call her and tell her everything,” Muskego continues. “If I hadn’t met a person like her, I probably wouldn’t be here today. She has shown me . . . you can’t just think of yourself, you have to think of other people. You can’t be selfish.”

Moses Falco, Sterling’s pastor, says that the close bond that Yonda and Muskego have formed is an example of what good church outreach work can look like. “We can go up and run a great program, but if none of the kids from Cross Lake or none of the kids from Winnipeg remember each other or care to hang out with each other, it doesn’t matter,” he says. “To see this relationship after eight years, it’s a sign that, wow, there’s something real here. It’s one of the reasons we keep going back—because of these kinds of relationships.”

Yonda points out that her friendship with Muskego, and her visits to Cross Lake, have transformed her. “We go out there for the week and we do our best,” she says of the group from Sterling, “but we learn so much more than we put out, and we take away so much more than we give.” 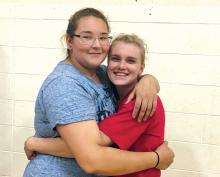 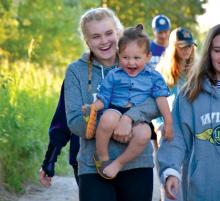 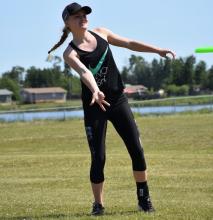