In desperate times, Anabaptist communities find innovative ways to be the church by offering practical help 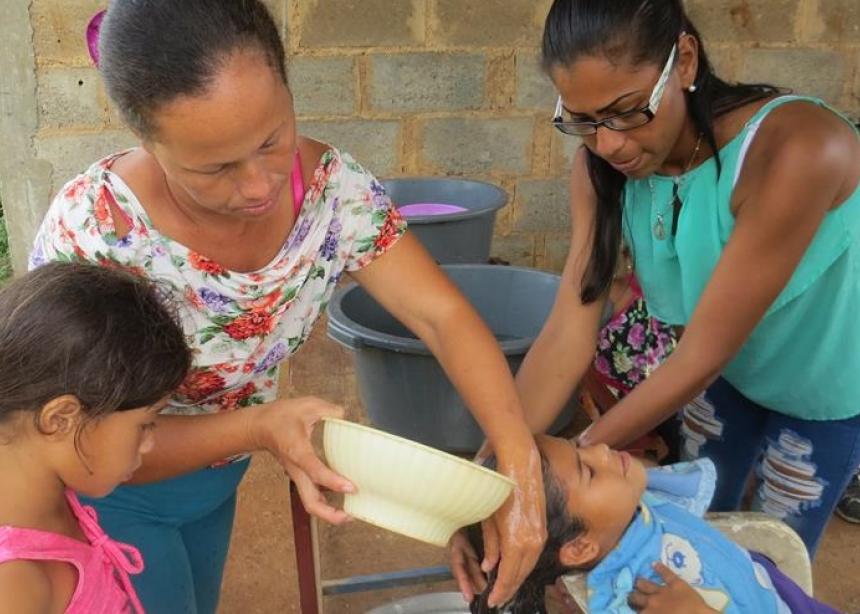 In the midst of constant inflation and economic uncertainty, Venezuelan Mennonites minister creatively in and through their churches, sharing food and supporting their communities. Iglesia Evangélica Menonita de Oriente (Evangelical Mennonite Church of the East, IEMO) coordinates efforts between two congregations on Isla Margarita, two on the mainland, and several additional study centres.

According to a 2017 study from the Central University of Venezuela, 80 percent of households have insufficient food, and nine out of 10 were unable to pay for their daily meals. The study also stated that in the year 2016-2017, more than half of the population reported losing an average of 11 kilos due to food shortages.

Erwin Mirabal, president of the IEMO, said, “Today in Venezuela, food can’t be purchased. Commerce is paralyzed, and medicine is lacking. Basic services fail. The price of this disaster is paid with lives.”

Ever conscious of these realities, IEMO incorporated the practice of sharing food and basic health-care materials into their ministries. In September 2017, Iglesia Cristiana Menonita de Colombia (Colombia Mennonite Church) donated four manual corn grinders to reduce the price of corn for arepas, a staple of the Venezuelan diet.

The two churches on Isla Margarita served more than 1,500 meals from mid-February through mid-April in 2018, focusing on children and adults with compromised health. In Caracas, on Mondays and Fridays, the church takes arepas to people who live in the streets. They also serve children and mothers in hospitals. The church in Yaracuay makes vegetable soup to serve to people who gather in the central plaza. Members in all congregations work together to prepare food to eat after services.

The meals taken to the pediatrics hospital in the capital city are especially important for mothers and children from rural areas who do not have relatives in the city. Jennifer Infante, who coordinates this project, noted how necessary this program is, since the hospital doesn’t have resources to feed patients.

Pastor María Elena Rodríguez from Iglesia Menonita Comunidad Cristiana de Camino (Mennonite Christian Community of the Way), and others, use their own patios to grow food like bananas, corn, papaya, and medicinal herbs. They generously share their produce and encourage others to plant what they can to help lessen the food crisis.

Upon his recent baptism in Caracas, José Díaz said that participating in the church was not just about the food, but that he was truly welcomed to God’s table through fellowship.

“I came to know the Lord around 20 years ago but was never baptized,” Díaz said. “This church came to the plaza to share soup. I like the way they treated us with a lot of love, and they invited me, so I started attending the church. I felt the love of family.”

The IEMO churches offer a children’s ministry, Cooperative Games for Peace, that teaches children skills in communication, cooperation, conflict resolution, and active nonviolence. It also promotes values of love, respect, empathy, and self-esteem through more than 4,000 games. The churches have received official permission to use this program in public schools. To date, thousands of children have received training in 14 schools.

“The games are designed to be a fun way to include everyone and to demonstrate that cooperation is better than competition,” said Linda Shelly, Mission Network director for Latin America. “They are also meant to reflect the character of Christ and love of God being developed in all of us.”

Erwin Mirabal said that when teachers and school directors ask the facilitators why they do this work, they share about their faith and give them a copy of “What is an Anabaptist Christian?”

“During the street protests when tear gas was thrown, we didn’t expect any children to come,” said Vegas. “However, they showed up with face masks on!”

On Isla Margarita, the Iglesia Menonita Comunidad de Paz (Community of Peace Mennonite Church) plans regular activities for children, including shampoos and haircuts given with love. Shampoo is scarce and expensive, so washing hair with shampoo has become a luxury that children don’t usually have at home.

Inirida Alfonzo de Perez, one of the women leading the children’s activities, said, “I don’t have anything, but I have the willingness to go out and serve. I don’t have gold or silver, but what I have is faith.”