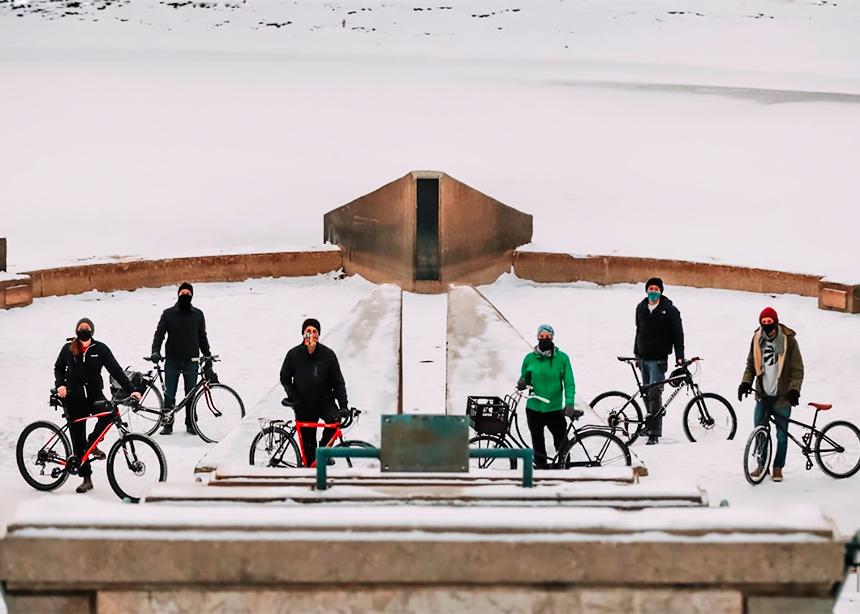 The Velo Renovation collective cycles year round as the primary mode of transportation for themselves and their supplies. (Photo courtesy of Velo Renovation)

If you see someone cycling in Winnipeg, toting behind them stacks of lumber, buckets of paint or even a ladder, it’s probably a member of Velo Renovation. They are used to the double takes they get at supply stores.

Velo Renovation is a contracting collective in Winnipeg that prioritizes care for the environment and people over profit. The eight team members do almost all their operations by bicycle and only use motor vehicles when absolutely necessary. They use sustainably sourced, recycled or reused materials whenever possible, and have researched purchasing carbon offsets to mitigate the waste they do produce. They have saved more than 2.3 tonnes of carbon and avoided well over 12,540 vehicle kilometres to date.

Nathaniel De Avila, who attends Sargent Avenue Mennonite Church in Winnipeg, is Velo’s founder and project manager. He has been doing repairs and renovations for more than a decade and is a regular winter biker and reclaimer of discarded food.

He started Velo Renovation, which gets its name from the French word for bicycle, last October because he wanted to see more sustainable choices in Winnipeg’s construction market. He formed the collective with friends who had extensive skills but didn’t want to work in the relentless structure of the conventional labour market.

De Avila started with the basic practice of doing everything on bikes, something he emphasizes is not a new idea. “Most of the world is doing things on bicycles,” he says. “They cart around their entire store to the open-air market, they take their whole family on two wheels or three wheels.” He says it is a viable option even in North American winters, where it’s still a novelty for many.

That doesn’t mean it is easy.

When Maraleigh Short spoke to Canadian Mennonite, the Velo member and Canadian Mennonite University (CMU) alumna, had just been hauling a trailer of paint across the city with her bicycle under the blistering hot sun after a long day. But it can also be a lot of fun; instead of driving through rush hour and construction, trying to stay awake, she and her coworkers might cycle to the jobsite together and arrive having exercised and built community. “The dream is when we all get to do that as a team and then that feels really unique and kind of beautiful,” she says.

The collective pushes the boundaries beyond just two wheels. A lot of the work is extending the lifespan of materials.

“The length of time that you’re able to use something is the amount of time that you spread the carbon footprint over,” De Avila says. “That’s actually really important to recognize.”

Velo team members remove walls for one project and transform the three-meter boards into countertops for another. They advocate for custom-built cabinets, saying they are stronger and will last longer. They repair stucco instead of putting on brand new siding.

“To make that current siding on the house last another 15 years, you’ve done a great service to the environment by just not using more,” he says.

De Avila spends a lot of energy trying to convince clients not to change anything at all. He often finds himself tearing out something that was meant to last 100 years because someone has decided it doesn’t look good anymore. He says people have to consume less and use the spaces and things they have, instead of buying new ones. It has been challenging for Velo to balance teaching clients to make better choices for the environment, which include making no changes or buying sustainable goods that are far more expensive than their mainstream counterparts, while not putting the collective completely out of work.

For the purpose of Velo is also to be people-centred. The team, which counts a few Mennonite church members and several CMU alumni among them, follows some unusual workplace customs. No work is compulsory, which means workers set their own schedules. They each determine their own wages and are all able to view the business’s finances. They strive to work in a way that is sustainable and liveable.

“You get the most effective and best work out of people when they’re actually interested in doing the job, and not when they’re just showing up because they’re afraid of losing their job,” says De Avila. “In so many ways, we’re not a for-profit company, we’re a for-people company.”

Being for people is intertwined with being carbon conscious, and not just about paint quality or flooring types. Short says that creating a work environment in which staff get to choose when and what they work on, and “not prioritizing jobs over ourselves or each other,” is pushing back against the capitalist system, “the carbon monster,” that consumes and wastes at an increasing rate.

Short is looking forward to taking on more projects that align with Velo’s values as the small business grows. “Even within a year it has grown immensely,” she says. “I’m excited to see if we can push that carbon-conscious part even further in different ways and what that could look like, beyond just being a fully functioning fleet of workers on bikes. Which is exciting too!”

Velo is also eager to try new sustainable products, like linseed oil made from flax, and to offer opportunities like youth internships. 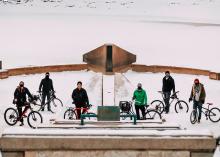 The Velo Renovation collective cycles year round as the primary mode of transportation for themselves and their supplies. (Photo courtesy of Velo Renovation) 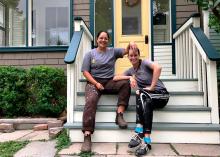 Janelle Wride, left, and Maraleigh Short are part of the Velo Renovation team. They are also both alumni of Canadian Mennonite University. (Photo courtesy of Velo Renovation)