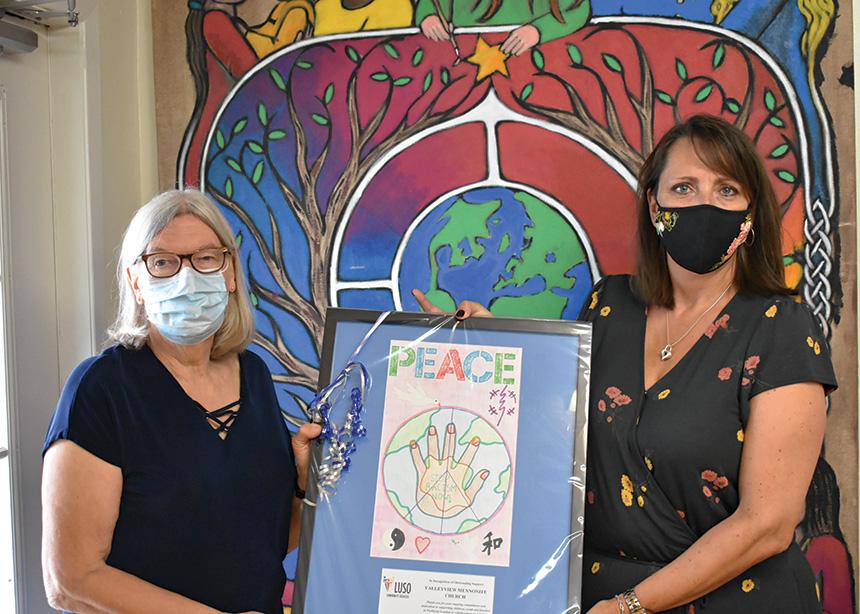 Valleyview Mennonite Church has been recognized with an award for more than a decade of engagement and advocacy around food security issues in their community of northeast London, Ont.

“Despite the unknowns of the pandemic, we were able to count on the support of volunteers from Valleyview at a critical time,” Elisabete Rodrigues, LUSO’s director, said when she presented the award.

Valleyview’s leaders are quick to point out that their work has been a partnership and community effort from the onset.

Doris Kipfer of Valleyview has served as volunteer coordinator and meal coordinator for the Welcome Wednesday meal program and also supported the Basic Needs and Community Support, two programs at the heart of Valleyview’s food security effort. She is the first to say that she doesn’t work alone.

“It wasn’t me that did all the work, but I had a heart behind it,” she said. “I supported the process of finding and connecting people who had the abilities and connections to see the project(s) through.” She recalls that growing up on the farm, “We never let food go to waste. If we had too many apples, we’d tell the neighbours to get some. And if they had too many cherries, they’d call us. It was considered almost a sin to waste food. Surely there is a way to harvest wasted food, and to use it for people’s benefit.”

Valleyview has long been investing in food and community. In 2008, Lynne Williams, who was serving as pastor of Agape Mennonite Fellowship, also in London, confirmed a need for a weekly daytime hot meal program in the city’s underserved northeast. Together with Sue Eagle of East London United Church Outreach, Williams helped local churches launch what became Welcome Wednesday, a weekly gathering and meal hosted at the Salvation Army building, with five churches contributing on a monthly rotation.

Over time, other local congregations contributed financial support and volunteers with Baptists, Catholics, Anglicans, Presbyterians and Vietnamese churches playing a role. The meal became a community hub for 50 to 90 persons each week, and an important touchstone of fellowship including many isolated seniors. Meals were often preceded by crokinole and card games, with church volunteers and participants sharing the work.

From here the vision grew. The London Food Coalition was created in 2017, hosted by the Northeast London Basic Needs group, a collaborative effort of churches, non-profit organizations and government agencies. Their vision was to rescue, recover and redistribute food waste from the city’s grocery stores. The city of London contributed a refrigerated truck that picks up food and takes it to a central hub at the Salvation Army’s Centre of Hope. From there it goes to various community groups. Valleyview’s share supports the Welcome Wednesday program, with extra fresh fruit and vegetables for people to take home.

In 2018, Valleyview helped launch a summer snack program in London’s northeast, providing funding and volunteers to serve families who rely on school breakfast programs during the school year. Nutritious snacks are prepared and distributed to children via three local YMCA day-camp programs, serving more than 200 children daily over the summer weeks.

In 2019, Valleyview participated in an experimental program in which a small group of families came together to shop, cook, learn, save and celebrate food together.

Over these years, the need for a local hub for the food bank was identified. Mary Boniferro of Valleyview was involved in that project which is connected with the local Hillcrest Salvation Army building and the Welcome Wednesdays program.

The pandemic changed things. Most in-person programs were put on hold, while the Welcome Wednesday became a takeout enterprise. During the pandemic winters, Valleyview contributed clothing, hygiene items, baked goods and fruit to Ark Aid Mission and St. Andrews United Church for people in overnight shelters. The homemade baked goods are most appreciated, as they show a personal touch at a time when personal connections are so limited.

This article appears in the April 4, 2022 print issue, with the headline “Valleyview Mennonite honoured for supporting local community.” 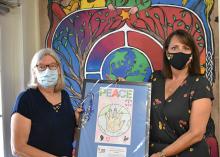