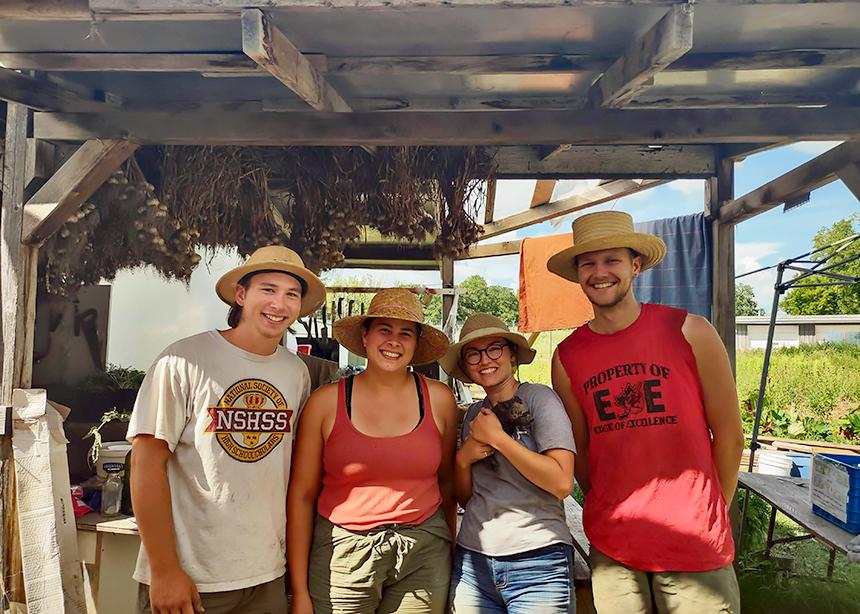 What started as the CMU Farmers Collective in 2011, Metanoia Farms has been recruiting people of various backgrounds and experiences from the university it is partnered with. This season’s farmers include Megan Klassen-Wiebe, Bryn Friesen Epp, Kayla Drudge and Trey Dornn.

Klassen-Wiebe was one of the CMU students who founded the farm in 2011, after carrying out her practicum on a small farm in New Brunswick.

“I learned how to milk a cow and came back and thought, ‘Where can I have a cow?’” she says, adding that her prior farming experience primarily pertained to livestock, and that she had no concept of what Community Supported Agriculture (CSA) looked like, but that her co-farmers at the time did.

Metanoia’s website states, “Community Shared Agriculture is a participatory approach to farming in which the relationship between grower and the eater is direct, it is a relationship that joins growers and eaters in sharing risk and delicious food.” Members receive a weekly box of seasonal vegetables from mid June to September, food that is grown on the land.

“It’s been a joint effort, as with any kind of project,” Klassen-Wiebe says. “There’s no way that this would still be going if it was just me. We’ve had some rough years, where I wasn’t sure if I could keep going, but I found good folks to work with.”

One of Klassen-Wiebe’s dream for the farm is that it will one day have a cow. “If you look around, there’s still no cows, so I’m still here waiting,” she says with a laugh.

Friesen Epp is serving his third season with Metanoia Farms and says he came to the farm through his English and philosophy degree at CMU. “Although we’ve all been at CMU, very different educational [and] academic interests have brought us here,” he says, noting that he has been thinking about his relationship with the world and the spirituality connected to it.

“I feel like I have to arrive here and dig my feet into the soil after I hit dead ends in my academics, where I think a lot about how to be in the world and how to love well in the world,” he says. “I feel like [Metanoia Farms] is, in some ways, a project trying to reintegrate work and food and sustenance, with joy and love and laughter.”

Drudge came to Metanoia Farms looking for a change of tempo from a music degree.

“[I was] tired of being inside, tired of performing, tired of being on my computer, and have always known that the call to the land was pretty strong for me,” Drudge says, adding that staying local, stewarding one piece of land and getting to know that land “feels just like what I want to do,” considering their ancestral history of Mennonite displacement and “constantly having to reconnect to the land.”

However, Drudge says that length of time spent on one piece of land doesn’t necessarily correlate with feeling more connected to it. “Getting to know something, you realize how deep that connection can go and how little you know,” Drudge says.

“I was thinking maybe snails, just because everything else seemed out of the question,” he says. “Cows? Way too big. Goats? Escape artists.”

Eventually, pigs were settled on for educational purposes.

“That’s been a really joyful part of the farm experience, and I think really completes this place,” he says.

Some of the pigs have earned names, such as Chris, Dave, Robin and Steve, but all have earned the respect and love of Klassen-Wiebe, Friesen Epp, Drudge and Dornn for the lessons and fertilizer they provide.

Learn more about Metanoia Farms and its community shared agriculture program at metanoiafarmers.ca. 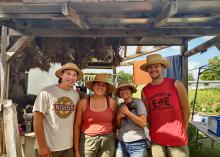 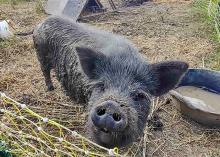 Pigs are a new addition to Metanoia Farms. (Photo by Daisy Belec) 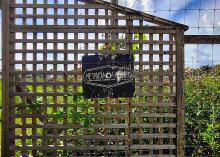 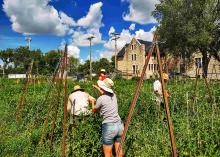